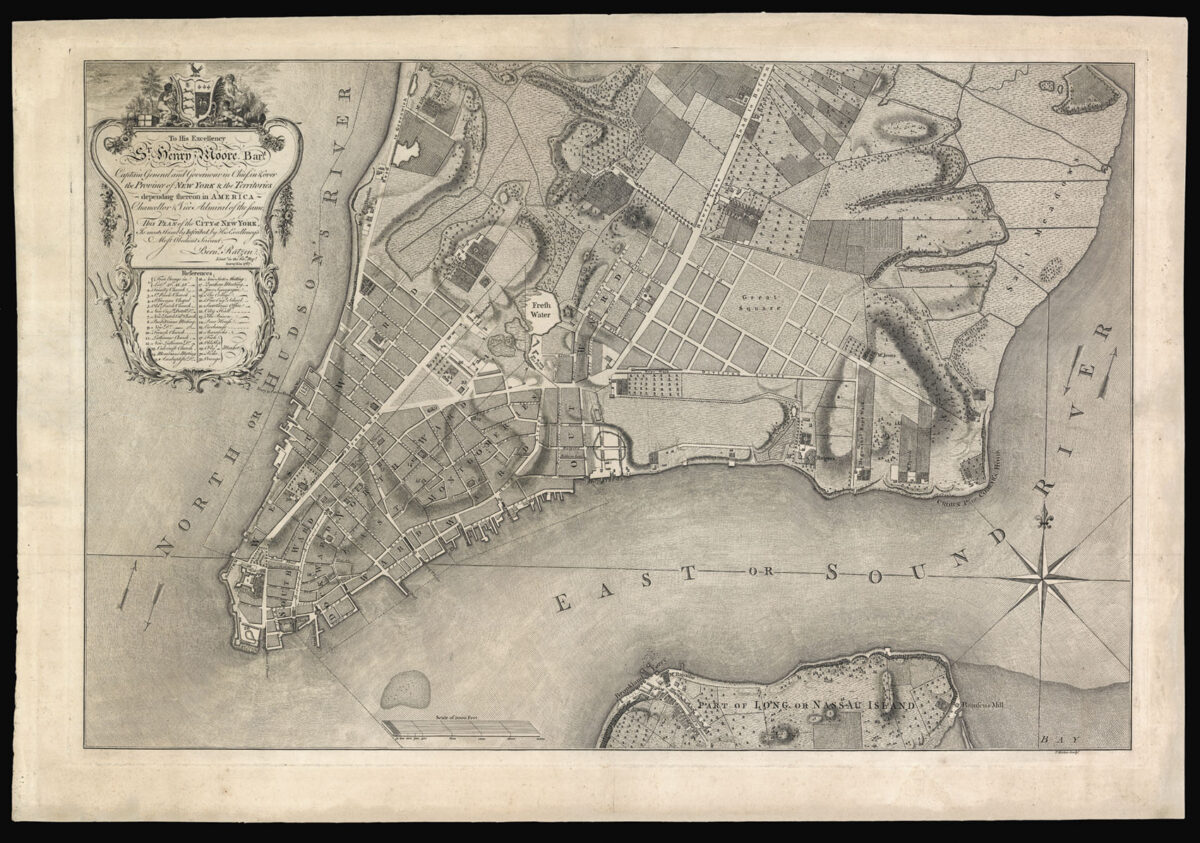 Rare first state of the ​“Ratzen plan” of New York

To his Excellency Sir Henry Moore Bart. Captain General and Governour… This plan of the city of New York is most Humbly Inscribed by…Bernd. Ratzen

The extremely rare first state of one of the most important colonial maps of New York City.

​“Made just prior to the Revolution, the Ratzer plan is the most accurate an useful survey of New York then circulating” (Deak).

The map is usually referred to as the ​“Ratzen Plan” due to the misspelling of the mapmaker’s name in the title. It was the work of Bernard Ratzer, British engineer, and was a result of the Stamp Act Riots of 1765. Fearing that the city might soon become a battleground, and needing detailed information about its layout, the British authorities commissioned Ratzer to survey and construct a map of the city.

The manuscript was completed in 1767, and very few examples of this first state were printed in 1769. It lacks a publisher’s imprint and date, and was probably prepared primarily for circulation within the British Administration. This must account for its great rarity. Nevertheless, it was advertised for public sale in the New York Gazette, 21 August 1769. Another copy of the first state can be found in the Stokes Collection, New York Public Library. A second state, with the imprint of Thomas Jefferys, Jr. and William Faden, was published in January 1776, at the beginning of the American Revolution. Almost all surviving copies of the map are in the second state.

While this map focuses on the developed part of the city, at the tip of Manhattan Island, Ratzer also prepared an even larger map that shows both the city and its environs. It is usually referred to as the ​“Ratzer map” (see item 14). This second map was first published in 1770, and republished in 1776. In referring to these two maps, Cohen & Augustyn state that they are perhaps the finest of an American city produced in the eighteenth century. The ​“geographical precision combined with its highly artistic engraving was unsurpassed in the urban cartography of its day”.

The topography and renderings of estates and farmlands on the Ratzen plan are given with such fine detail that it makes clear what a small town New York was before the Revolution. A key beneath the title identifies 31 important sites. The landmarks and property lines are reported with such accuracy that the map is sometimes used to settle title disputes to this day.