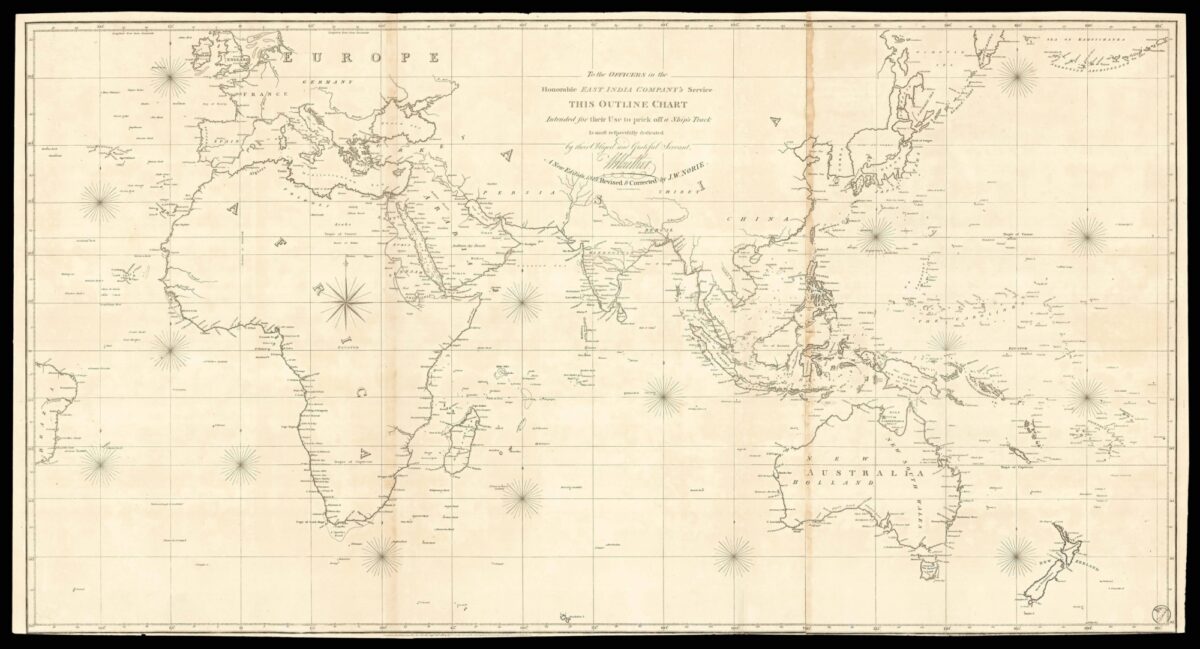 To the Officers in the Honourable East India Company’s Service This Outline Chart Intended for their Use to Prick Off a Ship’s Track Is most respectfully dedicated by their Obliged and Grateful Servant, W. Heather. A New Edition, 1820, Revised & Corrected by J.W. Norie. with Additions to 1830.

Rare chart of the world published for use aboard East India Company ships, in order to mark a ships track.

The East India Company operated under a variety of names from its founding in 1600 until it was dissolved in 1874. It was formed to maximise British trading opportunities in southeast Asia, particularly the Indian subcontinent, and eventually expanded to manage trade with China and the far east as well. Although nominally a body to regular and exploit trade, the East India Company became increasingly involved in politics over the course of the eighteenth century, and as a result was often faced with opposition. Nonetheless its powerful influence continued to be felt, and it held a monopoly over trade until well into the nineteenth century.

At the time the present chart was made, the East India Company was still at its height, with a private army around twice the size of the British military forces, and with extraordinary revenues of many millions of pounds. In fact, large swathes of India were effectively ruled by the Company through the use of its private army. With ships constantly sailing back and forth between Britain and Asia, it was essential to ensure smooth and efficient passages. To this end, blank charts were produced for the sailors of the East India Company, which they could use as a template to plot their tracks through the sea. The present example identifies ports and harbours at which the ships might wish to stop off, as well as various shoals and reefs that could prove to be dangerous obstacles for the unwary seaman. Furthermore, this edition is revised with updated cartographical information acquired during the 1820s.

It was published by John William Norie (1772 – 1843), a mathematician, hydrographer, chart maker and publisher of nautical books. His most famous work was the ​‘Epitome of Practical Navigation’ (1805), which became the standard work on navigation and went through many editions. Norie began his career working with William Heather, who ran the Naval Academy and Naval Warehouse in Leadenhall Street from 1795, which sold navigational instruments, charts, and books on navigation. Norie took over the Naval Warehouse after Heather’s retirement and founded the company J.W. Norie and Company in 1813. After Norie’s death the company became Norie and Wilson, then in 1903 Imray, Laurie, Norie & Wilson.

Despite the popularity of Norie’s charts aboard nineteenth century British vessels, the present chart is extremely rare. We have been able to trace one other example of the 1820 edition with revisions to 1830, held at the National Maritime Museum, Greenwich.