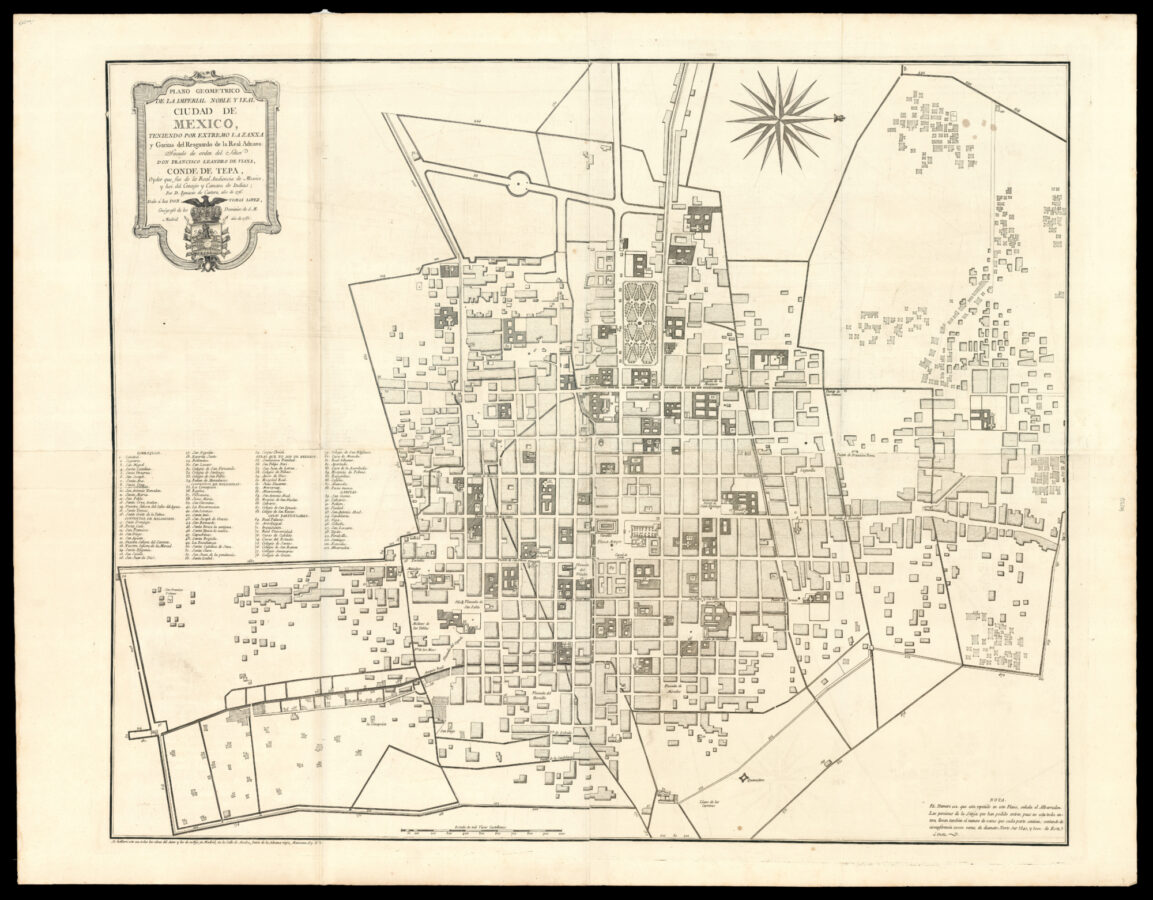 Tomas Lopez de Vargas Machuca (1731–1802) was a Spanish publisher and the leading cartographer of the age. He studied with Jean-Baptiste Bourguignon d’Anville in Paris before returning to his native Madrid in 1760, where he established the only independent cartographic publishing house in Spain. He began making maps for the Bourbon kings and became Royal Geographer to King Carlos III in 1780. He was even authorised to create a geographic agency for the secretary of state in 1795.

Lopez’s map follows the one made by Ignacio de Castera Obiedo y Peralta (1750–1811), a Mexican architect and cartographer. Castera gained the favour of Archbishop Nuñez Haro de Peralta and Viceroy Guemes Pacheco, which allowed him to participate in the construction of important buildings in the City of Mexico. Castera’s map, however, appears never to have been published until this reproduction by Lopez. It is cartographically similar to ​“Plano Ignografico de la Nobilisima Ciudad de Mexico, hecho en el año 1776 por D. Ignacio Castera, Mro.De Arquitectura y Agrimensor de tierras, aguas y minas por S. M. y aumentado en el de 1778”, indicating that he made at least two separate maps between 1776 and 1778. Lopez had already published a 1758 map of Mexico City, a plain orthogonal plan of the type created by military engineers. His work was typical of late eighteenth century Spanish attempts to assert control of their empire through cartography. Spain’s reluctance at the beginning of the eighteenth century to make public claims on their American territories via maps and sparse settlements ​“encouraged Spain’s European rivals, France and Britain, to engage in real and cartographic ​‘filibustering’ campaigns in the region” (Reinhartz). Although Castera and Lopez’s map supposedly presents a detached view, it is still fraught with ideology. Mexico City was a vital part of New Spain: the capital of the viceroyalty, the seat of the bishopric and a trading centre with links to both Asia and Europe. Carlos III, king at the time this map was made, was determined that the reforms he initiated in Spain should be copied throughout the Spanish empire, and that Spanish colonial possessions should reflect European cultural values. Protestant critics dismissed Spain’s empire as an ​“intellectual backwater”. This plan counters these claims by displaying it in the style of a European city view: well-planned, geometric, and modern.
It addresses contemporary ideas which equated the physical order of a state with its political efficacy, reflecting the political, social and urban modifications resulting from the reforms carried out by the Bourbon kings in the second half of the eighteenth century. In this sense, it is the first printed map to show ​“modern” Mexico.

To the lower right of the plan is a key listing districts, monastic houses, convents, non-religious buildings, public buildings, and canals. The plan clearly shows the Alameda Park, the Zócalo (Plaza Mayor), and the Cathedral of the Assumption of Mary. To the lower left is a note stating that the street names were taken from a manuscript map of the city provided by Don Francisco Xavier Machado y Fiesco.

The plan is dedicated to Don Francisco Leandro de Viana, Count of Tepa (1730–1804). Viana was active in the colonial administration of the Spanish Empire, and made his reputation protecting the interest of natives in the Philippines. He would eventually settle in Mexico after marrying into the Mexican nobility and was appointed alcalde de crimien (criminal judge) and oidor (royal judge) there, two of the highest-ranking judicial positions that could be held in the Spanish empire.

There are copies held in the NYPL, University of Illinois, Harvard, Biblioteca Nacional de España, and the National Library of Scotland.