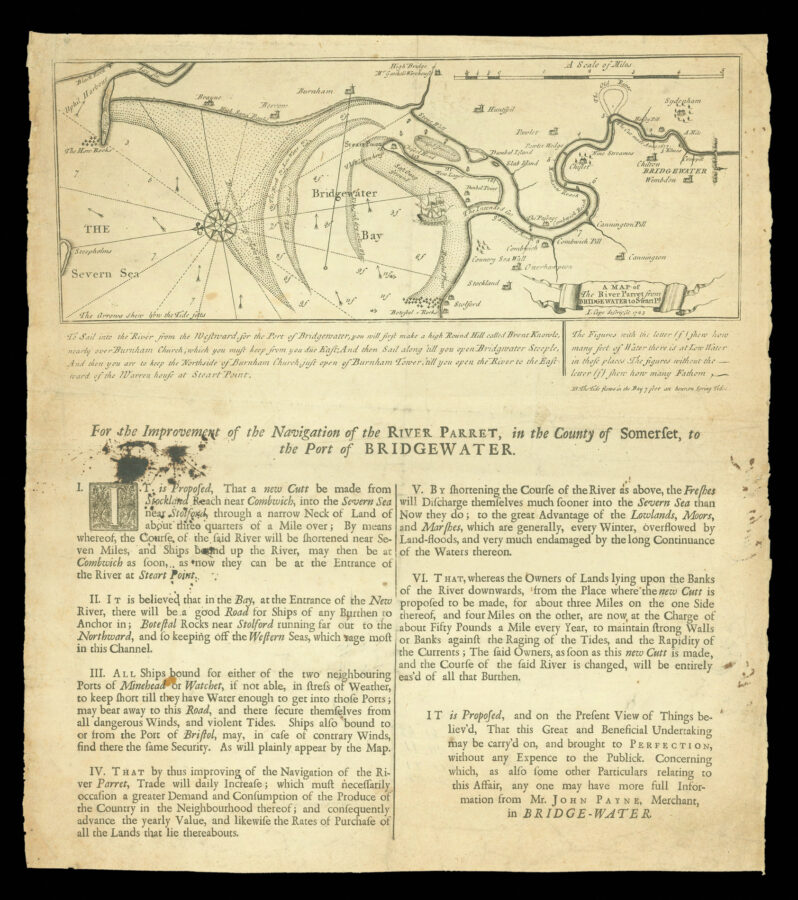 In 1723, Henry Payne, with some supporters, promoted a plan to shorten the length of the River Parret, between Bridgewater and the sea, by carving across the seaward bank of the river — the ​‘Intended Cut’ as marked on this plan.

The project excited some considerable correspondence, with many of the original papers surviving in the Bodleian Library (Gough MSS. Somerset 7, f. 12, ff. 11–56), notably correspondence between two promoters, Councillor Harrison and John Payne and the Duke of Chandos, an opponent of the scheme.

The proposals suggested that this work could be done relatively cheaply, by cutting two notches in the river bank and using the displaced earth as embankments, to create a funnel effect, so that the water pressure from the river would wash away the rest of the earth to be moved (about three-quarters of the total) and thus carve a wider path suitable for ships. As a consequence, they suggested that the work could be completed for £6,400, with the actual construction of the cut costing only £1,000. They also emphasised that part of the bay could be reclaimed, and used for agricultural land.

Opponents were concerned that the earth washed away might either form a new bar across the mouth of the cut or be swept back upstream by the incoming tide and silt up the river — quite the opposite effect to the proposals.

The Reverend Lowthorp concluded ​“The Gentleman … that drew up the Scheme, I am persuaded, is much better acquainted with his Pen than a Spade or he would have found a great many other expensive Articles to account for” (Gough MSS. Somerset 7, f. 12, ff. 55) and, it seems that many concurred with his assessment, as the project was abandoned.