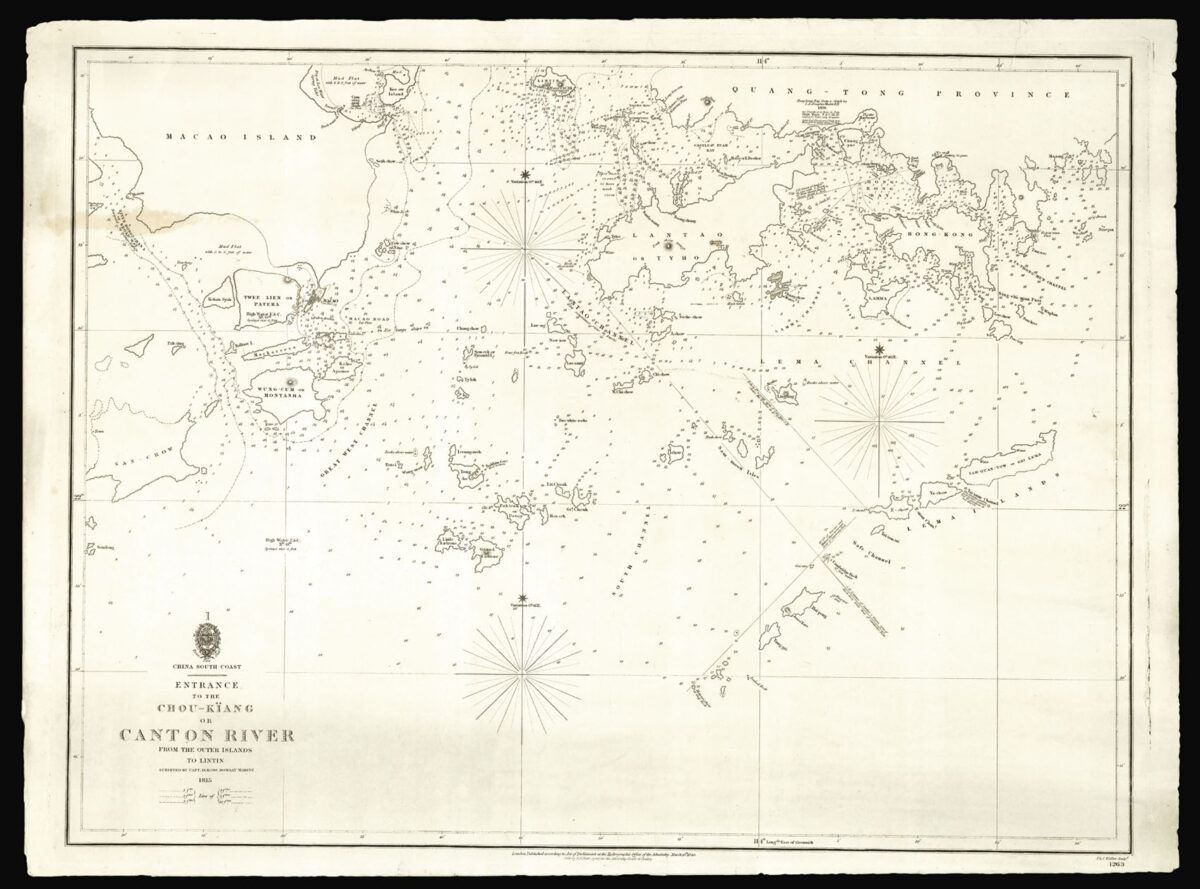 Entrance to the Chou-Kiang or Canton River from the Ouer Islands to Linten. Surveyed by Capt. D. Ross Bombay Marine, 1815.

This rare chart covers the mouth of the Pearl River from Macao Island to Hong Kong and the New Territories.

The survey was carried out by Captain Daniel Ross of the Bombay Marine in 1815, and was at the time the most detailed and accurate chart of Hong Kong available. It was reissued in 1840 in order to aid British naval vessels during the First Opium War (1839–1842). It predates the formal seizure of Hong Kong by Commodore Bremmer in 1841 and Belcher’s subsequent 1843 chart of the island. It is most likely that Ross’s surveys, together with Belcher’s as yet unpublished 1841 manuscripts, were used to negotiate the 1842 Treaty of Nanking. The Treaty formally ended the first Opium War and ceded Hong Kong to the British. The charts would later be used by Captain Richard Collinson during his great survey of the China Coast, who found them to be extremely accurate.

In 1807, Daniel Ross was tasked by the East India Company to survey the China Seas. He spent nine years surveying the coast between 1807 and 1816, and then spent a further four years charting the seas between 1816 and 1820. On his return to England in 1821 he was rewarded with a cash sum of £1,500 from the East India Company, for his tireless work out in the Far East. He would later appear before a government Select Committee investigating the possibilities of increasing the Britain’s trade with China.

Although acknowledged at the time, Ross’s survey, was largely forgotten until the First Opium War (1839 — 1842), when his work was used to serve as the basis for this updated chart. The additions to the chart were the work of I. A. Douglas, who had surveyed the waters in 1839, at the outset of the First Opium War, and whose name appears on the chart, just north of Lantao Island. Several geographical places are mentioned on Hong Kong Island and the New Territories, including, ​‘Bluff Point’, ​‘Woody Islet’, ​‘Tytam’, ​‘Fishhouse’, ​‘Pirate Bay’, and ​‘Junk Town’.

This chart is exceedingly rare, we are only able to trace one institutional example: The British Library.