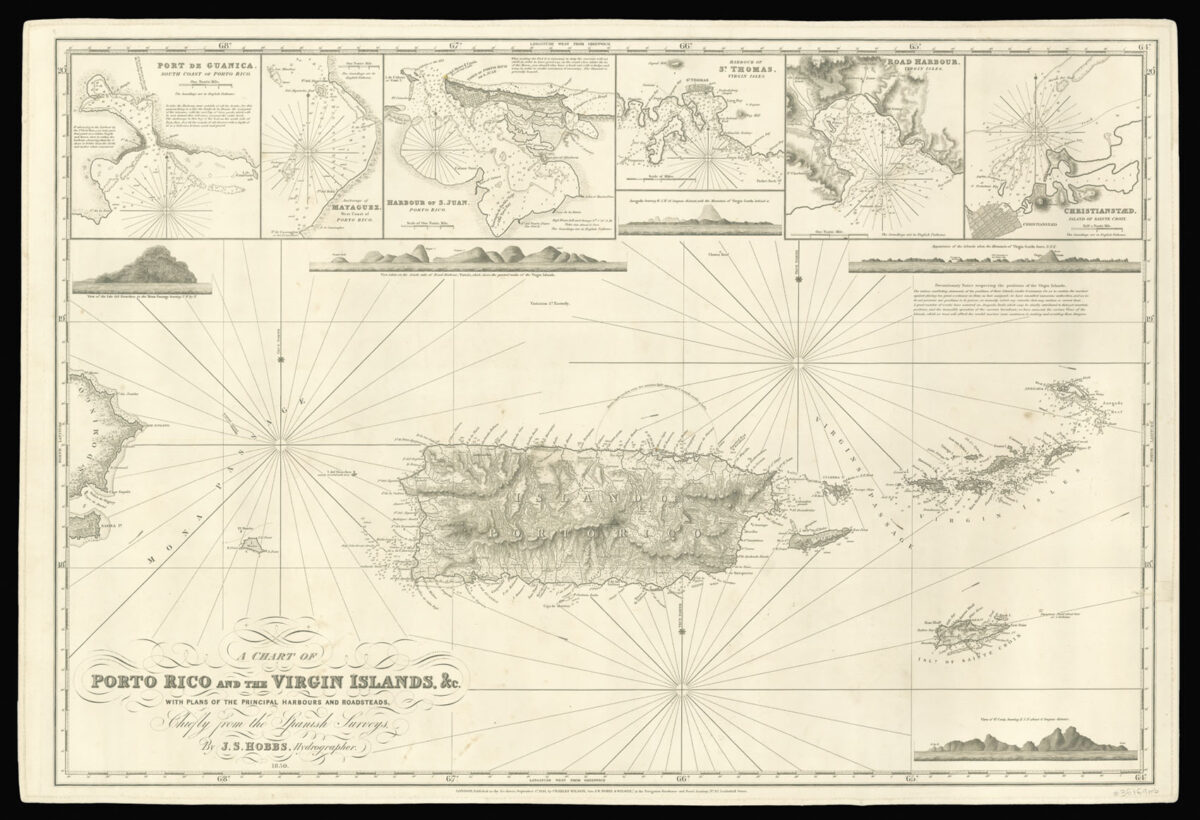 Rare chart of Porto Rico and the Virgin Islands

A Chart of Porto Rico and the Virgin Islands, &c.

Fine example of this impressive and extremely rare sea chart of Puerto Rico and the Virgin Islands.

​“The various conflicting statements of the positions of these islands, render it necessary for us to caution the mariner against placing too great a reliance on them as here assigned; we have consulted numerous authorities, and as we do not presume our positions to be precise, we earnestly solicit any remarks that may confirm or correct them.“

The chart was originally published in 1846, and editions are known from 1850 (our impression), 1857, and 1862. In keeping with the ​“Precautionary Notice,” post-1850 issues contain very substantial revisions, with far more hydrographic detail provided around the Virgin Islands (See for example this 1857 edition held by the American Geographical Society Library- http://collections.lib.uwm.edu/cdm/ref/collection/agdm/id/385.) In fact, by 1857 Hobbs was sufficiently confident in his work that he eliminated the ​“Precautionary Notice” altogether.

The chart is extremely rare in any edition. This writer has found reference to but one example of each of the above mentioned editions: An impression of the 1846 edition sold by Bickerstaffs some time ago, the example of the 1850 offered here, the 1857 held by the American Geographical Society Library at the University of Wisconsin-Milwaukee.

The collaboration of John Stratton Hobbs (1813–1874) and Charles Wilson (1807–1882) was active late in the second and throughout the third quarter of the 19th century, producing among others a Chart of the English Channel, with the Bristol Channel; a Chart of the North, West, and South Coasts of Ireland; a four-sheet Chart of North America from Boston to the Strait of Florida and Havana; and A General Chart of the Indian and Part of the Pacific Oceans.


References
OCLC #213882576, giving only the 1857 edition held by the University of Wisconsin at Milwaukee (the American Geographical Society collection).