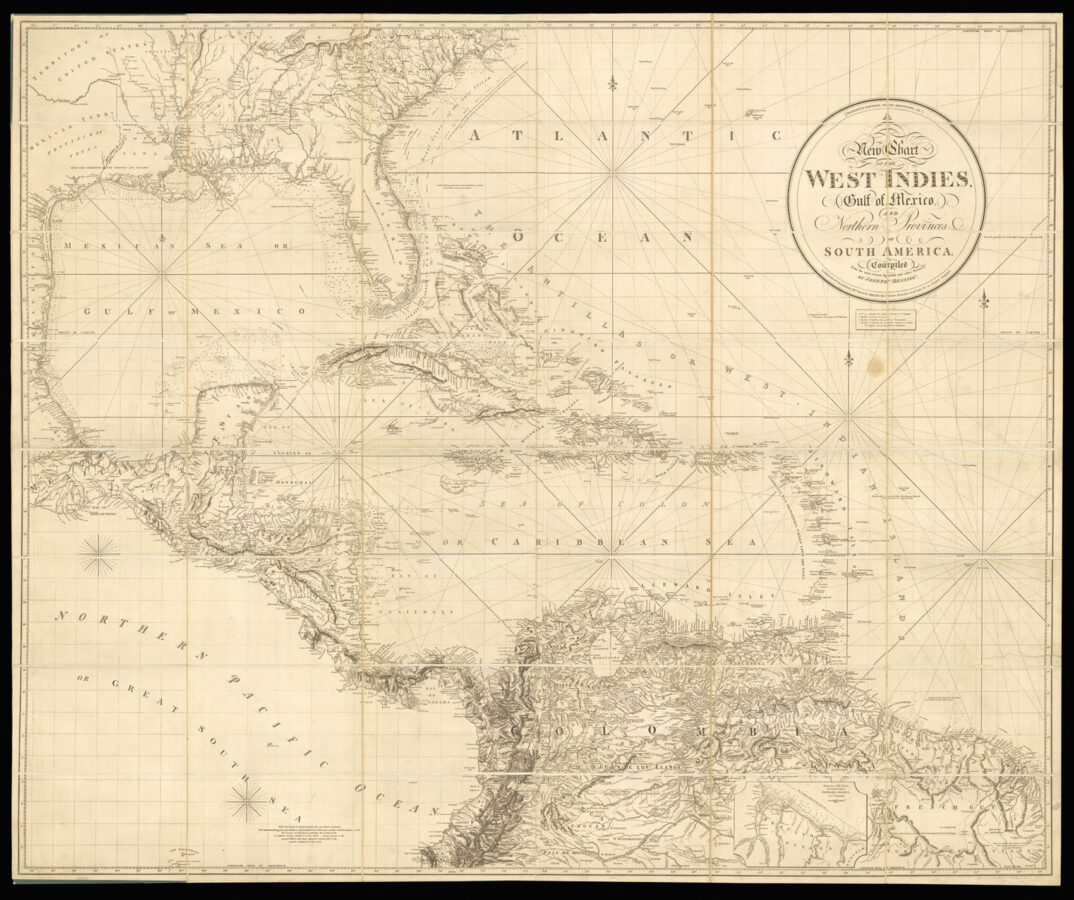 A New Chart of the West Indies Gulf of Mexico and Northern Provinces of South America; Compiled From the most recent Spanish and other Surveys, By Joseph Dessiou.

An interesting feature of the chart is the naming of ​“New Edinburgh” upon the Darien Peninsular. Why a chart published some 130 years after the Darien scheme should mention the colonial capital is unclear, however, at around the time of the charts publication another colonial scheme was being muted.

In 1820 soldier and adventure by the name of Sir Gregor MacGregor, had announced that he had been created cacique (highest authority or prince) of the Principality of Poyais, an independent nation on the Bay of Honduras. He claimed that native chieftain King George Frederic Augustus I of the Mosquito Shore and Nation had given him the territory of Poyais, 12,500 mile² of fertile land with untapped resources, a small number of settlers of British origin, and co-operative natives. He had created the beginnings of a country with civil service, army and democratic government. Now he needed settlers and investment and had come back to the United Kingdom to give people the opportunity. The scheme turned out to be a complete fabrication on the part of MacGregor, and when the first colonists arrived in 1823 they found nothing but dense jungle and four ramshackle huts.

This latest scheme might have become conflated with its Darien predecessor (MacGregor had gone as far as to claim decent from one of the Darien colonists), and hence led to the marking of ​“New Edinburgh” upon the present chart.

Joseph Foss Dessiou (1769–1853) Master RN, was one of the leading hydrographers of his day. Both his father, Joseph Dessiou (1743–1822), and one of his two sons, Joseph Foss Dessiou (1792–1818), were also hydrographers. Up to 1802 he served on naval ships, including the Camilla, Albion, Warrior and Dreadnought. Afterwards, he became master of the merchantman Naples. He was responsible for more than fifty charts and sailing directions, the majority of which were published by William Faden. Many of his charts, most notably those of the Channel could and were formed into pilots. In February 1828, he was appointed to the Hydrographical Office, where he helped in the production of the first volume of the Admiralty Pilot and produced several more charts, and numerous tidal charts. He would late become among the first systematic tidal investigators and paid tidal scientists.

Dessiou’s father, Joseph Dessiou (1743–1822), and one of his two sons, also Joseph Foss (1792–1818), were all hydrographers. Between 1770 and 1851, they produced more than one hundred items of hydrographic work: charts, sailing directions, light lists, the first tide table from a published method, and hydrographic serials.