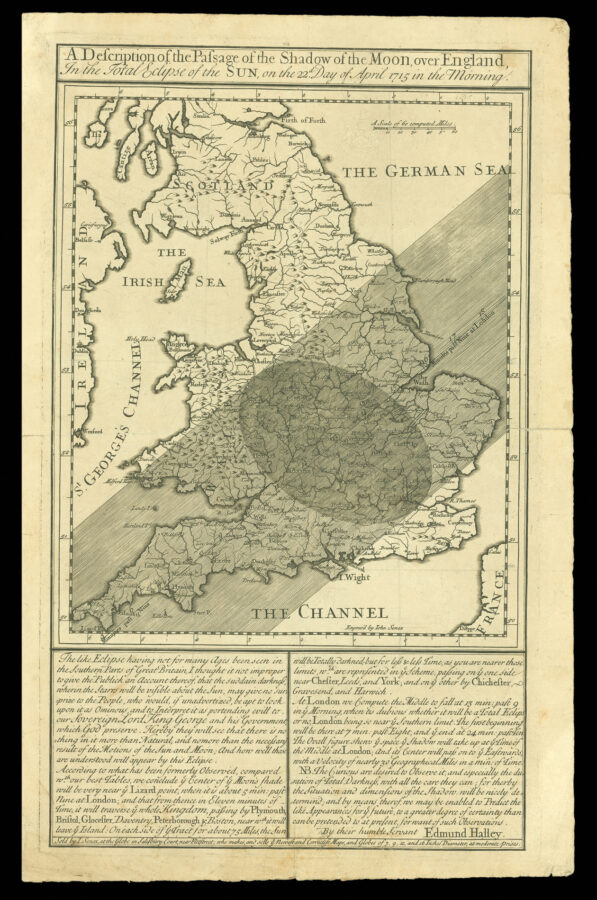 Rare broadside on the solar eclipse of 1715

A Description of the Passage of the Shadow of the Moon, over England, In the Total Eclipse of the Sun on the 22nd Day of April 1715 in the Morning.

Sir Edmond Halley was one of the first astronomers to apply himself to the study of eclipses. A pioneer of predictive astronomy, Halley is credited with the first truly scientific predictive eclipse map, ​‘A Description of the Passage of the Shadow of the Moon’. ​‘A Description’ was created for the solar eclipse of 22nd April, 1715, forecasting its passage over England and southern Scotland. It was impressively accurate, with a margin of error of only four minutes. The passage of the moon is shown by a dark oval and shaded track.

While the eclipse was a natural phenomenon to a scientist of his stature — people ​“will see that there is nothing in it more than Natural, and no more than the necessary result of the Motions of Sun and Moon” — he was also concerned (as indeed were other advertisers in the daily papers of the day), that, ​“The like Eclipse having not for many ages been seen in the Southern Parts of Great Britain, I thought it not improper to give the Publick an Account thereof, that the sudden darkness, wherein the Starrs will be visible about the Sun, may give no surprize to the People, who would, if unadvertized, be apt to look upon it as Ominous, and to interpret it as portending evill to our Sovereign Lord King George and his Government”.

The text goes on to give timings for the eclipse and the areas under its path.
The map was advertised for the first time in the Post Boy (issue 3098) for 15th — 17th March, 1715 thus:

​“This day is publish’d, the two following PRINTS. Mr Professor Halley’s Description of the Shadow of the Moon over England in the total Ecclipse of the Sun on the 22nd Day of next Month in the Morning, when the sudden darkness will make the Stars visible about the Sun; the like Ecclipse having not for 500 Years been seen in the Southern Parts of Great Britain”.

The map was printed and sold by John Senex, who met the leading British scientists of the day through his association with William Taylor, de facto printer to the Royal Society. Senex became the engraver of choice for their maps, plates and other illustrations. Indeed, when he was elected a Fellow of the Society in 1728, his proposers were Sir Hans Sloane, Halley and Francis Desaguliers.

This is the first state of the plate, with the sole imprint of John Senex as publisher and seller, and is unrecorded; the sources noted here refer only to the second state, so this example may be unique. 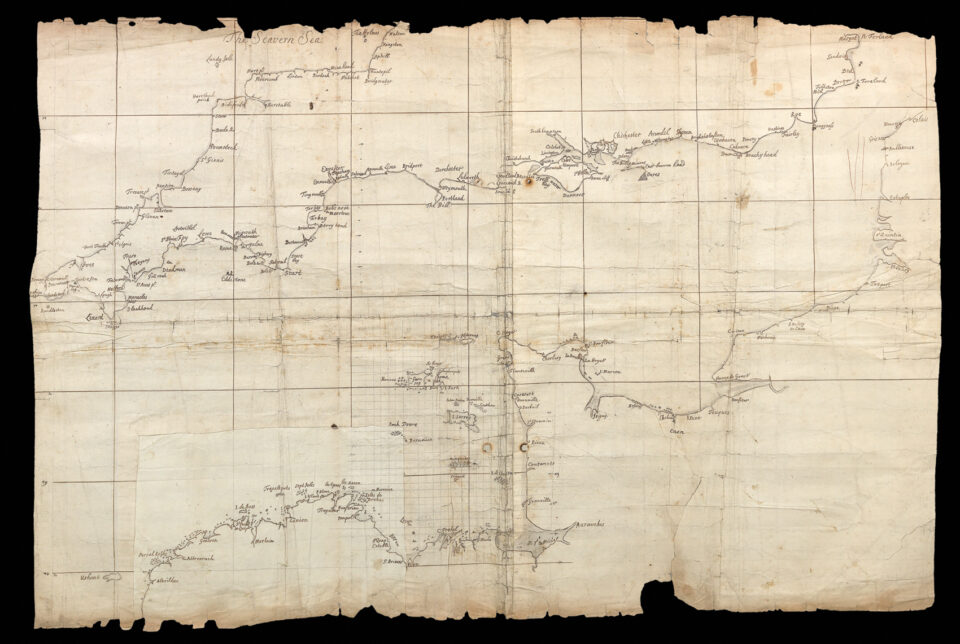