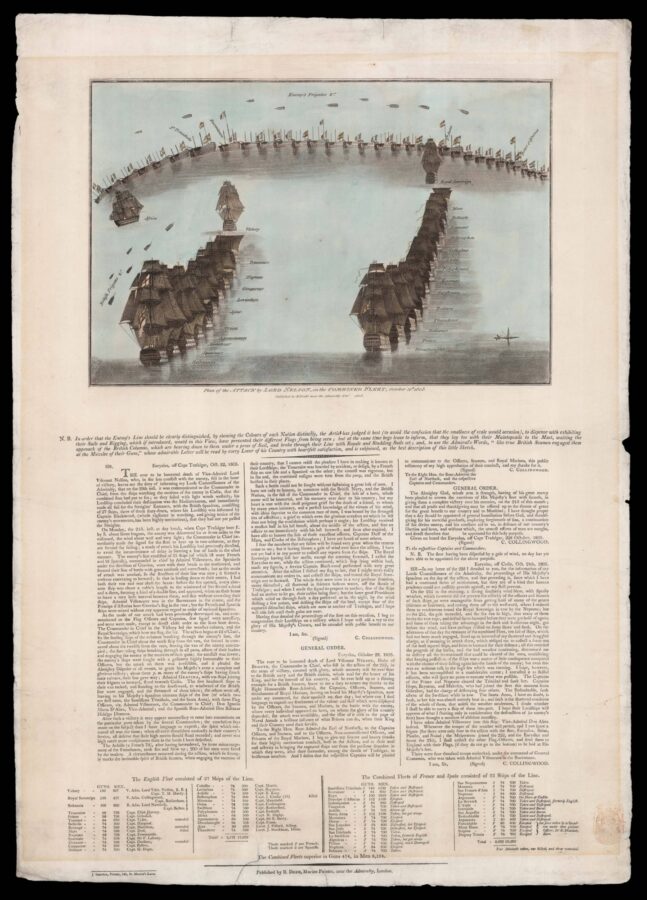 A Plan of the Attack by Lord Nelson of the Combined Fleet, October 21st, 1805.

This rare broadside was published the month following Nelson’s most famous victory.

The great deciding naval battle of the Napoleonic Wars took place on 21st October 1805, off Cape Trafalgar, between 27 British ships under the command of Admiral Lord Nelson and 33 French and Spanish vessels under Admiral Villeneuve. The broadside clearly illustrates Nelson’s radical battle formation of two straight lines. Although the formation would open up his vessels to enemy broadsides, it would spilt the enemies formidable line, reduce the odds, and then allow their superior gunnery and sailing skills to destroy the enemy at close range. The plan worked brilliantly, and with the French vanguard cut out of the battle by the British slicing through the fleet, Nelson’s men proceeded to take the enemy fleet apart. In fact the British did not lose a ship, while 18 enemy vessels were destroyed and some 14,000 French and Spanish sailors killed or captured.

Below the acquatint Dodd gives a defence of his rather schematic depiction of the French and Spanish line:

​‘In order that the enemy’s line should be clearly distinguished, by shewing the colours of each nation distinctly, the artist has judged it best (to avoid confusion that the smallness of scale would occasion), to dispense with exhibiting their sails and rigging, which if introduced, would in this view, have prevented their different flags from being seen; but at the same time begs leave to inform, that they lay too with their maintopsails to the mast, waiting the approach of the British columns, which are bearing down to them under a press of sail, and broke through their line with royals and studding sails set; and, to use the Admiral’s words, ​“like true British seamen engaged them at the muzzles of their guns”, whose admirable letter will be read by every lover of his country with heartfelt satisfaction, and is subjoined, as the best description of this little sketch’.

Below the note are printed Collingwood’s letters to the Admiralty describing the battle, his general orders congratulating those who took part in it and a list of ships in each fleet.

Robert Dodd (1748–1815) British Marine painter and graphic artist who lived and worked in Wapping, London. Nothing is known about his training but he was a prolific aquatint engraver who published much of his own work. He exhibited at the Society of Artists in London in 1780 and the Royal Academy between 1782 and 1809. He produced fine and detailed portrayals of famous ships such as ​“Nelson’s ​‘Victory’ Sailing from Spithead” and also painted naval actions of both the American Revolutionary War and the French Wars of 1793–1815. He conveyed well the drama of a battle and storm though spectacular light effects, such as the sun’s rays piercing dark clouds, and by contrasting fire and black smoke against a serene blue sky. He also painted and engraved a series of views of the Royal Dockyards and of Greenwich Hospital. The print from his painting ​‘The Mutiny of the ​‘Bounty’, showing the mutineers casting Captain Bligh adrift is the best known contemporary image of the event. He also illustrated an edition of William Falconer’s poem ​‘The Shipwreck’ (W. Baynes, London, 1811) with 18 aquatint ships in various weather conditions. In 1795 he painted a huge canvas of the end of Lord Howe’s victory at the Battle of the Glorious First of June 1794, for the dining room of his local inn n Commerical Road, in London: this too is now in Greenwich. His works have been confused with those of his lesser known marine-painter brother, Ralf.