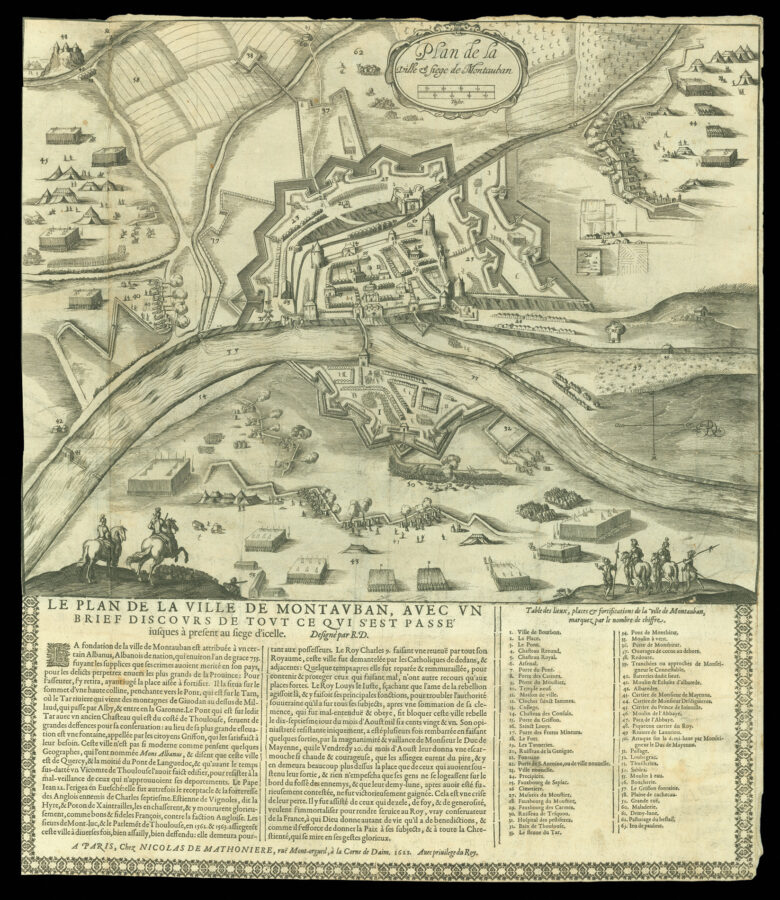 Rare birds-eye plan of the Siege of Montauban

The Siege of Montauban lasted from August to November 1621. After the Peace of St Germain-En-Laye, the Huguenots won control of four fortified towns: La Rochelle, Cognac, La Charité and Montauban. Montauban had a population of around 10,000 and a strong artisan and shipping economy, and continued to sporadically renew its fortifications, replacing their medieval curtain walls with Italian bastion defences. In 1621, following the forced reintroduction of Catholic rights in the Protestant city of Béarn, the Huguenots rose in rebellion against the French Crown; after a desultory siege of the outer defences of La Rochelle, the royal army under Louis XIII moved to Montauban. Despite the Crown mobilising over 25,000 soldiers, the siege was unsuccessful; the fortifying measures paid off. A year later, the war was brought to an end by an accord which reinstated the toleration of the Edict of Nantes, and the Huguenots retained La Rochelle and Montauban.

Nicholas Mathoniere (1573–1640), a Parisian printer and publisher, produced this plan as a news-sheet description of the siege, with figures of the attackers firing on the town from their siege-works. The mapmaker, R.D., is otherwise unidentified. The text appears to describe the early phase of the siege — the last dates mentioned are in August — while the plan itself depicts an assault on the city commanded by the Duc de Mayenne.