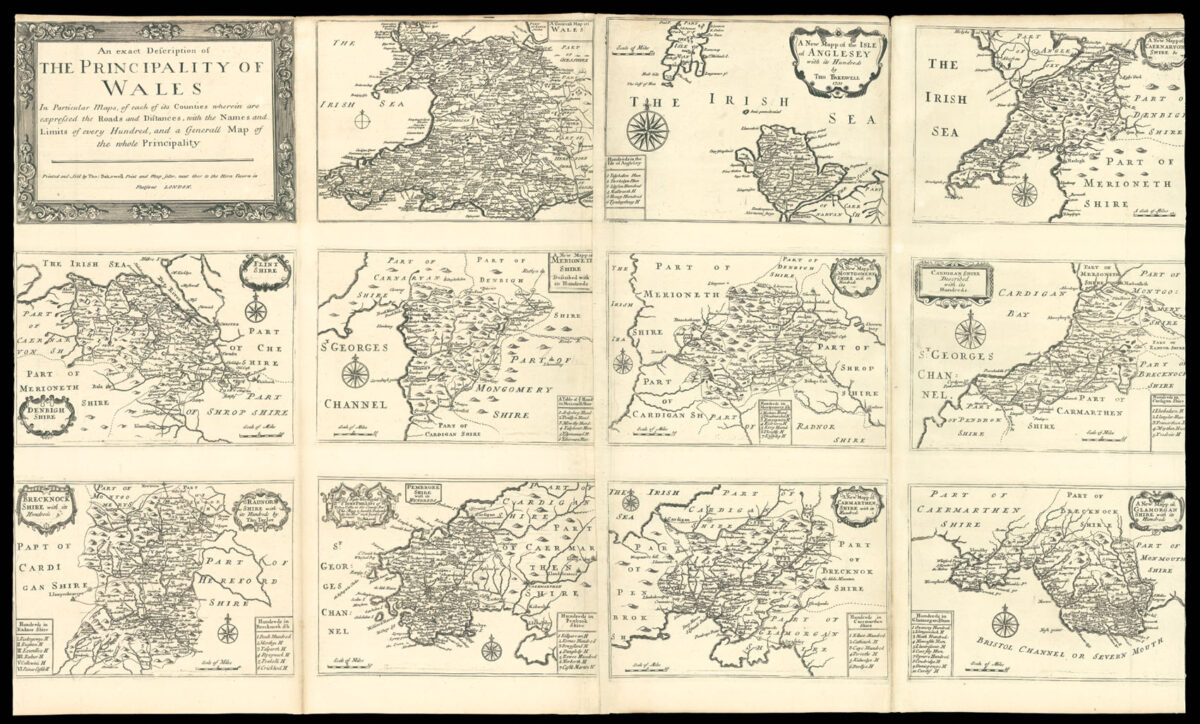 An Exact Description of the Principality of Wales In Particular Maps of each of the Counties wherein are expressed the Roads, Distances, with the Names and Limits of every Hundred, and a General Map of the whole Principality.

The atlas, printed here on two sheets joined, consists of an engraved title upper left, followed by 13 maps of Wales and her counties on 11 plates. Bakewell’s atlas is based upon Thomas Taylor’s atlas ​‘The Principality of Wales…’ published in 1718, whose stock and shop had been acquired by Bakewell’s predecessor Timothy Jordan in 1729. Nine of the plates are from Taylor’s atlas, with his imprint having been crudely erased from all the maps except that of Radnorshire. The two other plates: ​‘A General Map of Wales’, and ​‘A New Map of the Isle of Anglesey’ are engraved by William Rhodes, with the map of Anglesey bearing the imprint of Bakewell, and dated 1731. The address on the title page ​‘next door to the Horn Tavern, Fleet Street’, gives a date range for the work of between 1737–1742.

We are unable to trace any institutional example of the present atlas. Hodson in his work on county atlases of the British Isles, notes one now lost example:

​“Some years ago Dr Eric Gardner reported that an example of an Overton atlas in his own collection contained the eleven Welsh maps published by Taylor and that two of these (unnamed) had been ​‘re-engraved by W. Rhodes for Thomas Bakewell and one is dated 1731’. The present whereabouts of the atlas is unknown and no examples of these two maps has been discovered.”