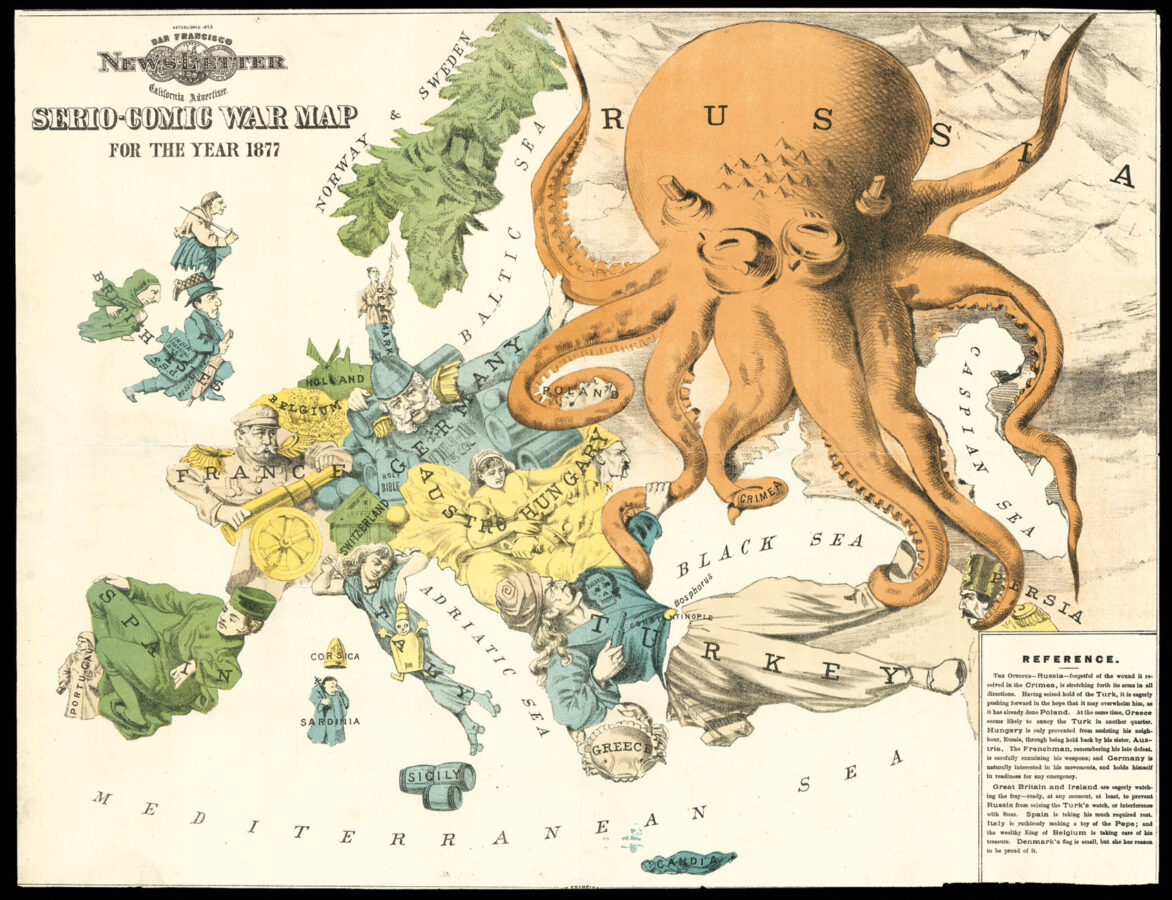 The caricaturist, Fred W Rose, is best known for two amusing political cartoon maps of Europe, this Serio-Comic ​“Octopus” Map of Europe in 1877 and ​“Angling in Troubled Waters”, another amusing view of political events in Europe published some 22 years later in 1899. He also produced a less common British Isles Map satirising Gladstone’s Government in 1880.

The map shows the political situation in Europe in 1877, Russia — a vicious-looking Octopus — its eight lengthy tentacles extending into Northern and Eastern Europe, the Middle East and Asia, encircling in tightening strangle-holds the territories of Finland, Poland, Bulgaria, the Crimea and Persia and even reaching as far as the Holy Land, Armenia and Khiva in Central Asia. The Turkish Empire, in the form of a prostrate turbaned figure lying across the Dardanelles and Bosphorus, pistol at the ready, protects his prize gold watch, Constantinople, which hangs around his waist. Greece, an irritating crab, pinches his right elbow. Hungary is held back from attacking Russia by his sister Austria. Germany, in the form of its uniformed Emperor, surrounds itself with arms and weaponry, ready for any emergency. France in the form of Marshal MacMahon, points a dangerous mitrailleuse at its German neighbour, eager to avenge its defeat in the Franco-Prussian war of 1870–71. Italy is a young girl enjoying her newly found liberty, the Papal crown located in Rome. Spain is the reclining figure of Alfonso, sleeping after his recent exertions. The King of Belgium surrounds himself with his treasure. Denmark waves her small flag proudly. The British Isles, England a kneeling gentleman umbrella at the ready, Scotland a kilted highlander with claymore raised, and Ireland a hooded monk with Home Rule on his mind, stand on the sidelines determined at least to save the Turk’s watch. Sweden stands aloof in the North as a fur-clad woodcutter.

The present map would appear to be an edition of the map published for the American market: published as it was for the San Francisco News Letter and California Advertiser.