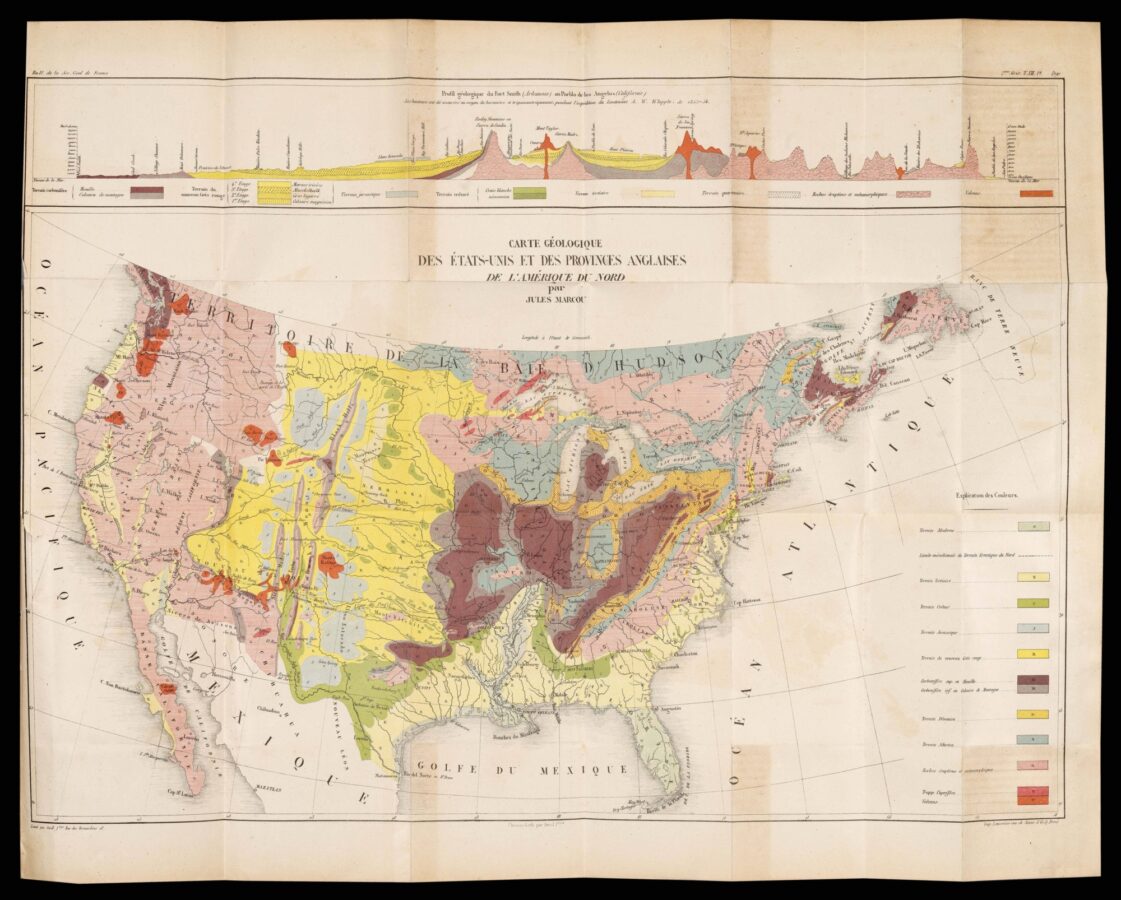 The first geological map of the United States to stretch beyond the Mississippi, over the Rocky Mountains and all the way to the west coast of America. First published in 1853, the current map is updated to include the complete west coast up to the 50th parallel, and adds a ​‘Profil geologique du Fort Smith (Arkansas) au Pueblo de los Angeles (Californie)’ surveyed by Lt. Amiel Weeks Whipple, as part of his survey of the Thirty-fifth parallel for the Pacific Railroad, which extended from Fort Smith, Arkansas, to Pueblo de los Angeles.

Jules Marcou (1824–1898) was a French geologist, who spent the majority of his working life in the United States. Marcou first travelled to the States, in 1847, under the direction of the Jardin des Plantes, in order to study the geology of the country. In the following year, he joined Louis Agassiz, professor of geology at Harvard, and accompanied him to the Lake Superior region, visiting the copper mines of the Keweenaw Peninsula, Lake Huron, and Niagara. After six months, he returned to Cambridge, Massachusetts, and sent minerals he had collected to Paris. In January 1849, Marcou directed his attention to the geology of New Jersey, Pennsylvania, and Virginia. Later he crossed the Allegheny Mountains, visiting the Mammoth Cave and other localities, and then traversed Canada. The results of his endeavours were published in the present work.

Marcou’s work, for the first time, sets out the distribution of the strata, according to the nomenclature of Murchison and de Verneuil, into lower and upper Silurian and Devonian. In this respect, the work is an important step in linking the latest geological work in the Old World and applying it to the New, something that Marcou would continue to do for the rest of his carrier. To the back of the work are eight plates of fossils sorted into their stratification. The geological map extends, for the first time, beyond the Mississippi as far as the Rocky Mountains, and clearly marks the 12 different strata listed in the key.

In 1853, Marcou accompanied Whipple as the first geologist to traverse the American continent. He would later become the head of the newly formed Museum of Comparative Zoology in 1861, subsequently heading the paleontological division from 1860 to 1864. He is also credited with publishing, with his son, the first extensive carto-bibliography of the geology of the New World: ​‘Mapoteca Geologica Americana’ (1884).

In 1849, after completing work with the Northeastern Boundary Survey, Lt. Whipple (1817–1863) was assigned to the Mexican Boundary Survey team. ​“The peace treaty with Mexico was recently signed, and the group was exploring great lengths of land unknown to Americans and Europeans. Whipple’s leather-bound [diaries] provide observations of temperature and barometric pressure, descriptions of peaceful encounters with various tribes of American Indians, and detailed drawings of botanical specimens and topographic sites. With the northern and southern borders established and the discovery of gold in California, the United States Congress saw the need for exploration of the interior lands. There was much discussion of a super highway for travelers to safely navigate from the Mississippi River to the pacific coastline. By an act of Congress, Secretary of War Jefferson Davis was charged to conduct surveys for the first transcontinental railroad route to the Pacific Ocean, near the 35th parallel. Five teams were sent, the Northern, Central, and coastal Pacific surveys were commissioned along with two Southern Pacific survey teams, one of which was led by Lt. Whipple. The journals of this expedition are very thorough and contain details regarding supplies, the hiring of cooks and assistants, as well as environmental, topographical, and cultural observations. Whipple kept records with meticulous detail, often writing while on horseback or aboard a train, evident through his varied penmanship. ​“The survey party reached Oklahoma Territory on Friday July 15, 1853. After a lengthy crossing of the Poteau River, the wooden cart which carried men, supplies and surveying equipment, ran into a tree stump and was broken. A summer storm crept up on the team and Lt. Whipple soon found himself walking through knee deep puddles on the prairie. Sunday provided a day of rest for the men and the animals, and by Tuesday July 19, the team had arrived at the Choctaw Agency. Surveying the land and observing the inhabitants gave Lt. Whipple many things to write about, and his journal entries for the month of August are extensive and illustrate his view of the prairie (Jennifer Silvers Oklahoma Historical Society).

1. Inscribed on the front cover by Marcou to ​“M.A. Trecul, souvenir de son ami et compagnon de voyage, Jules Marcou”. Auguste Adolphe Lucien Trecul (1819–1896) was a French botanist, who travelled in North America between 1848 and 1850, presumably in the company of Marcou; and loosely inserted, in Marcou’s hand a transcription from ​‘Cosmos Cosmos; revue encyclopedique hebdomadaire’, for 19th June 1863, pages 744 and 745, regarding the chronology of the creation of Florida, which Louis Agassiz observed was the extension of a large reef. 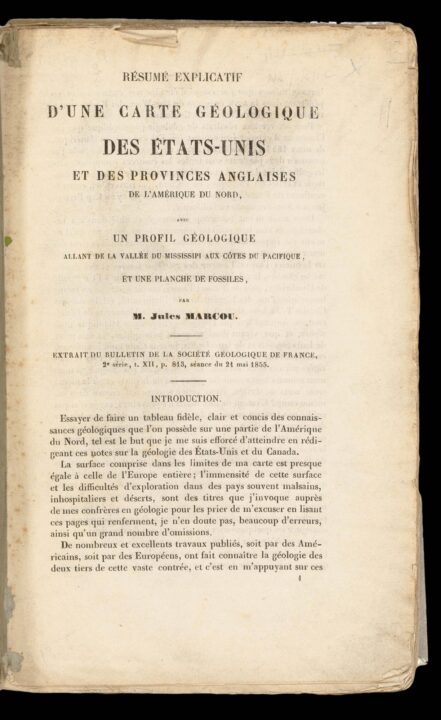 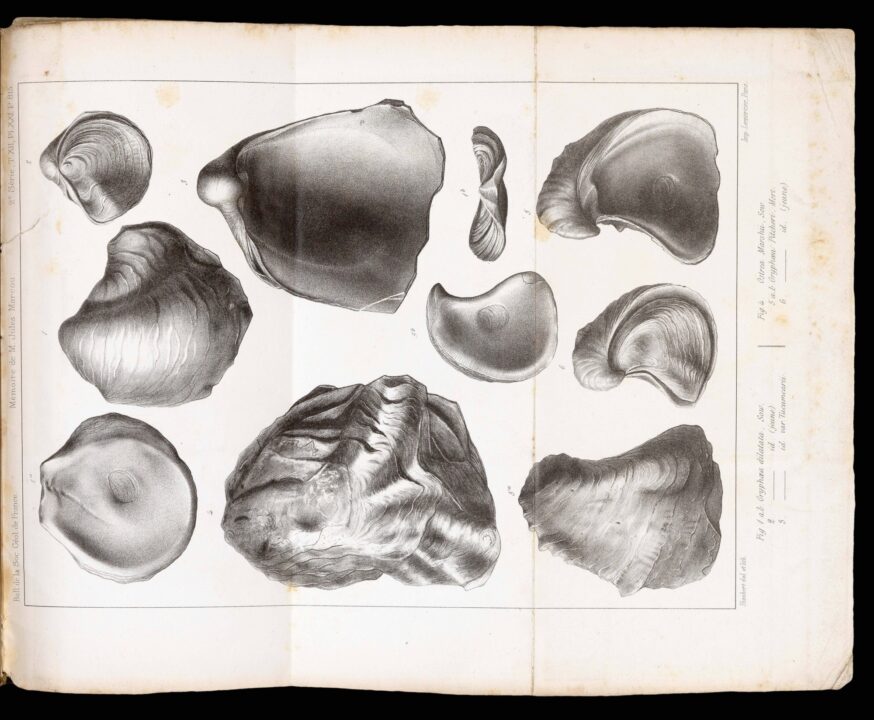