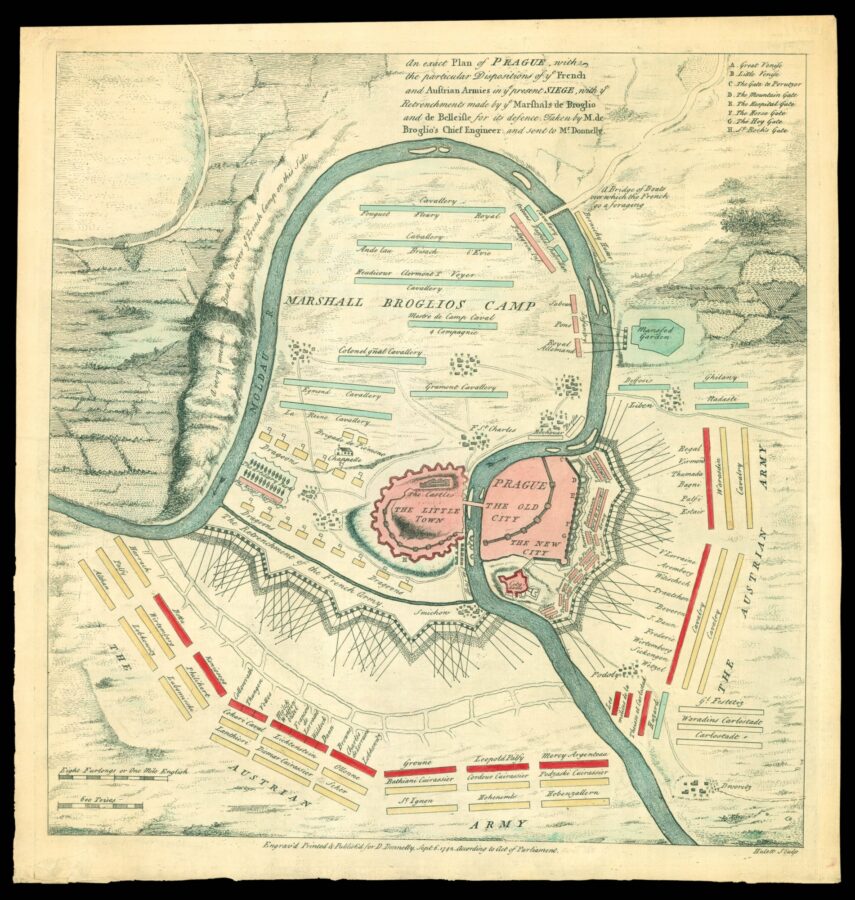 An exact Plan of Prague with the particular Dispositions of ye French and Austrian Armies in ye present SIEGE, with ye Retrenchments made by ye Marshals de Broglio and de Belleisle for its defence. Taken by M. de Broglio’s Chief Engineer, and sent to Mr. Donnelly.

Scarce separately published plan of the siege of Prague, published by one D. Donnelly, who cannot be identified with any certainty. The following year he also composed An Exact Account of all that passed at Prague, from the French Army’s flight thither after the battle between the King of Prussia and Prince Charles of Lorrain, down to the raising of the siege
… by an Engineer in the French Army at Prague. …

Publication was announced in the Daily Post (issue 7177) for 6th September 1742, with a rather fuller description of the background:
​“This Day is publish’d … An accurate Plan of the City of Prague, with its present Fortifications and Retrenchments, (very different from anything yet publish’d) wherein is shewn the Dispositions of the French and Austrian Armies on the 17th of August, O.S. being the Day this Plan was finish’d by Marshal Broglio’s chief Engineer. I received the Original Plan Aug. 31, O.S. it having been sent from Prague by way of France; and being satisfy’d that it was genuine, I order’d the Engraver to proceed on it with the utmost Dispatch, for the Satisfaction of the Publick. …”.

When a rival plan was published, Donnelly extended his advertisement:
​“And whereas there has been a Plan publish’d under the Sanction of his Excellency the Baron WASNER (as the two Proprietors would have the Publick believe) with a long Detail of seeming Perfections, I take upon me to say they are so far from being so, that there’s scarce one thing true, either as the Fortifications rais’d by the French, the Dispositions of the Armies, or the Entrenchments of either, as may appear to any Gentleman who is a Judge, on comparing this Plan with theirs; and some such there are now in Town, who have been lately out on the Spot, ready to testify the same, notwithstanding the ridiculous and ungentlemanly Distinction of truly Austrian and not French.” (Daily Post, issue 7193, 24th September, 1742).

In the Daily Advertiser (issue 3691) for 17th November, 1742, Donnelly made a further announcement
​“The Beginning of next Week [Monday 22nd ?] will be publish’d, AN impartial Account of all that pass’d at PRAGUE, … At the same Time will be publish’d, New and accurate Plans of PRAGUE; wherein are laid down the several Works, Batteries, Entrenchments, and Approaches, made by both Parties, which are not, nor could be inserted in the Plans already publish’d, as having been made since. …”.

The suggestion of revision is pertinent as the three exemplars examined all demonstrate evidence of re-engraving. There is an erasure, possibly starting ​‘London …’ outside the lower border, presumably an earlier imprint; the label ​‘The Castle’ is engraved over a two-line erasure, the second line being ‘… Camp.’; there is an erasure within the ​‘The New City’, just above that label and ​‘Dragoons’ (just above ​‘The Retrenchment …’) also appears to be over an erasure. Whether these revisions were made at the time of first publication or reflect corrections made in November 1742 is unresolved.