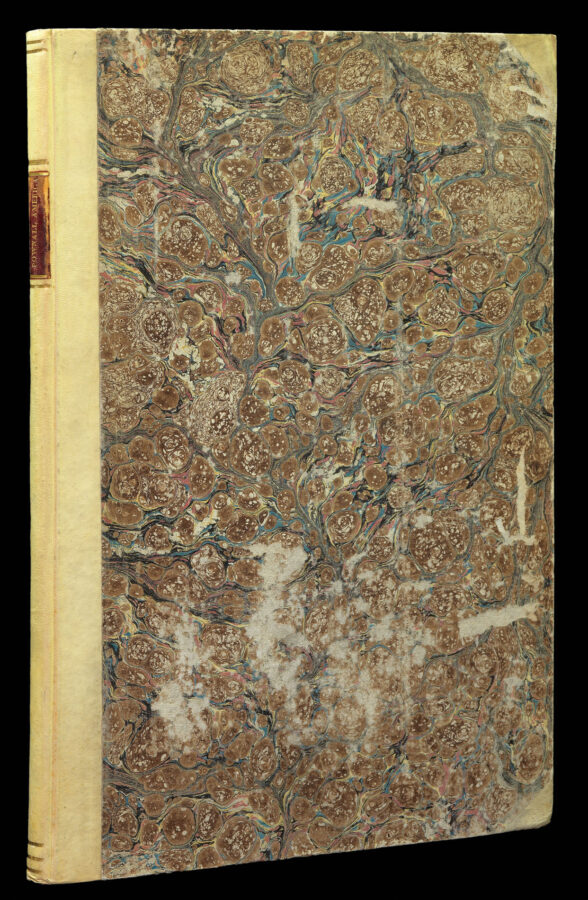 A topographical description of such parts of North America as are contained in the (annexed) map of the middle British colonies, &c. in North America.

One of the most important works issued at the time of the American Revolution, here complete with the rare map partially printed from the same plate as the famed 1755 map by Lewis Evans, printed by Benjamin Franklin.

In 1753, Thomas Pownall came to America as the private secretary to Sir Danvers Osborn, the newly appointed colonial governor of New York. Shortly after arriving, however, Osborn died, leaving Pownall without a post. Curious about the colonies, Pownall nevertheless chose to remain in America, travelling widely in the region. Evidently of great enthusiasm and intelligence, Pownall met many of the most influential men in America at that time, including Benjamin Franklin. From this relationship, he was able to attend the 1754 Albany Conference and became involved in Indian affairs in the colony. Through that work and his relationship with Franklin, Pownall met surveyor Lewis Evans and in 1755, Evans published his famed ​‘Map of the Middle British Colonies’, printed by Franklin and dedicated to Pownall. The map, the most accurate of the region at the time, was enormously influential — famously, it used by General Braddock during the French and Indian War — and multiple pirated copies appeared in London.

​“A great change came over the fortunes of Evans’ map in 1776. In that year Thomas Pownall, who had spent much time in America as Governor of Massachusetts Bay and South Carolina, and Lieut. Governor of New Jersey, published a folio volume entitled, A Topographical Description of such parts of North America … Pownall, after his return from America continued to take the greatest interest in the welfare of the Colonies … The increasing public interest taken in the affairs of the Colonies at the outbreak of the Revolution, doubtless prompted the publication of the Topographical Description. That work may be described as a new and much enlarged edition of both Evans’ Map and his ​‘Analysis’ [the text accompanying the Evans’ map] of 1755. As to the map, Pownall appears to have been in possession of the original Evans plate engraved by Jas. Turner in Philadelphia, and he uses it as the basis of his improved map…” (Stevens).

Indeed, much of the cartography of the western parts of Evans’ original map remained unchanged in the 1776 Pownall edition, save for the significant addition of the routes of Christopher Gist and Harry Gordon. This addition is augmented by the publication in the appendix of Gist’s journal of his 1750–51 journey through a portion of present day Ohio, Kentucky and on through North Carolina — the first publication of that important inland exploration.

The most significant addition to Evan’s original map is east of Philadelphia, where Pownall has extended the plate to encompass all of New England, with the coast as far north as Nova Scotia. The cartography of this portion is derived from a number of sources, but includes Pownall’s own explorations into the interior of Vermont and Maine, as well as the surveys conducted on behalf of Massachusetts Colonial Governor Sir Francis Bernard.

Pownall’s work and its important map gives the best picture of the interior of North America as it was understood in the year of American independence. 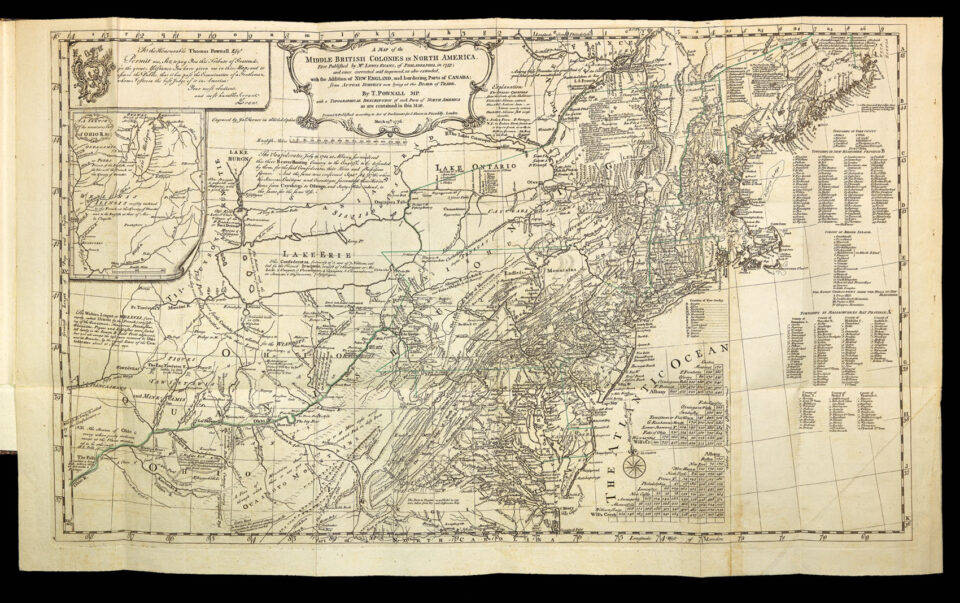