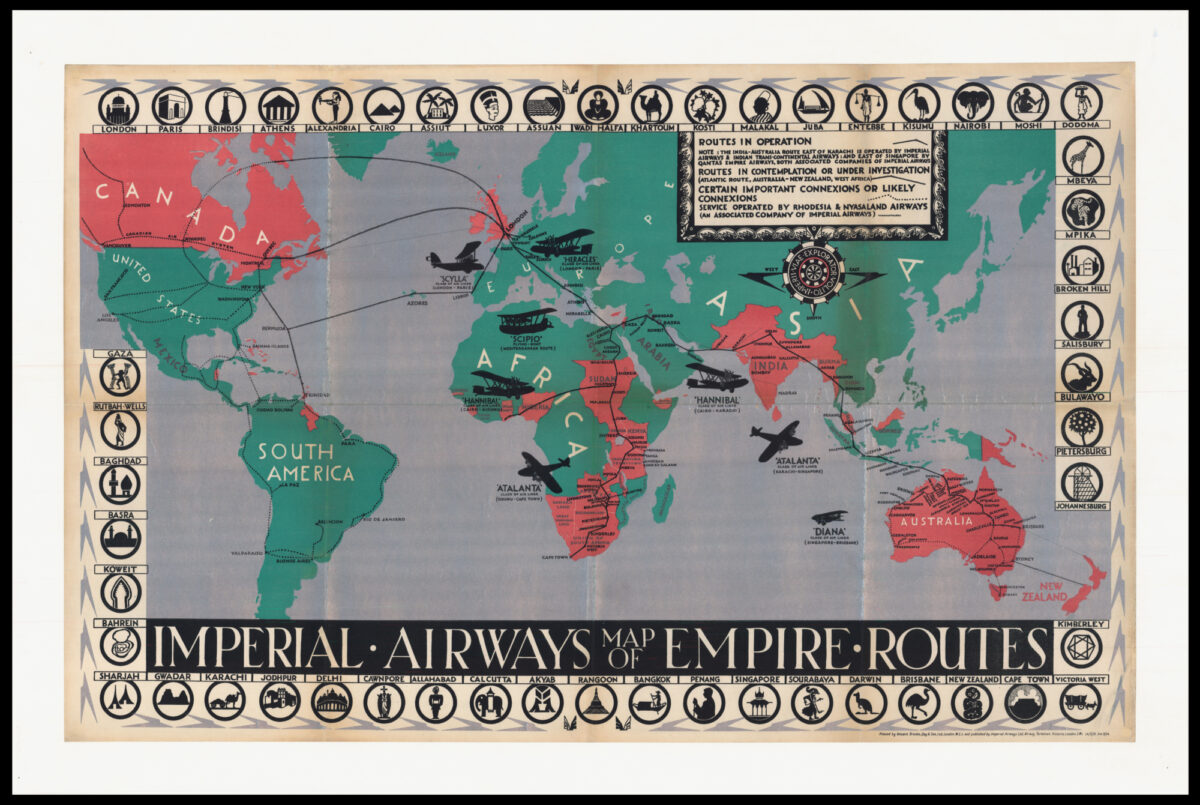 A striking map of the world, highlighting the British Empire in red, against a largely silver background, printed by Vincent Brooks, Day & Son, Ltd., of London. Surrounded by a border incorporating the silver ​‘Speedbird’ logo, and silhouettes representative of the destination cities that Imperial Airways flew to, and with a key to the ​‘Routes in Operation’, ​‘Routes in Contemplation or under Investigation (Atlantic Route, Australia-New Zealand, West Africa)’, and ​‘Certain Important Connexions or likely Connexions’. ​“Note: the India-Australia route east of Karachi is operated by Imperial Airways & Indian Trans-Continental Airways: and east of Singapore by Qantas Empire Airways, both associated companies of Imperial Airways”. The map itself is decorated with silhouettes of Imperial Airways aircraft, including the ​‘Heracles’, ​‘Scipio’, ​‘Scylla’, ​‘Hannibal’, ​‘Diana’ and the ​‘Atalanta’.

Founded in 1924, Imperial Airways was the fore-runner of BOAC (from 1939) which ultimately merged with BEA, in 1974, to form British Airways. Sir Eric Campbell Geddes (1875–1937), was part-time chairman of newly formed government subsidized airline from the outset. Under his ​“chairmanship empire routes were negotiated and the hostility towards the overland flight paths was confronted. To publicize the flying boat Geddes undertook an aerial cruise on Britain’s western seaboard in 1928. In 1929, he visited Australia to promote an extension of the weekly service between Britain and India and he participated fully in the inter-governmental agreements which led to the first airmail flight to Australia in 1934. He undertook a tour of inspection of the Cape to Cairo link in 1932 and having negotiated with all the governments en route he drafted the first law of the air. The long haul scheduled ​‘flying hotel’ services served the all-up empire airmail scheme for which Imperial Airways were paid a tightly negotiated fee. The financial structure drew increasing controversy but the original conception became an exciting visual expression of imperial unity in the 1930s. Much was expected of the state-subsidized airline and criticism in parliament in 1936 brought the monopolistic phase of British commercial aviation to an end” (Keith Grieves for DNB).

Interestingly, the key map makes mention of the newly incorporated Australian airline, Qantas Empire Airlines, which had established its first link with Imperial Airways in 1931. Initially carrying airmail from Brisbane to Darwin, it provided the final link in the Australia to England route. Shortly before this map was printed, in January 1934, Qantas Empire Airlines Limited was registered in Brisbane, effectively and formally, combing the interests of both companies, which each held a half share.