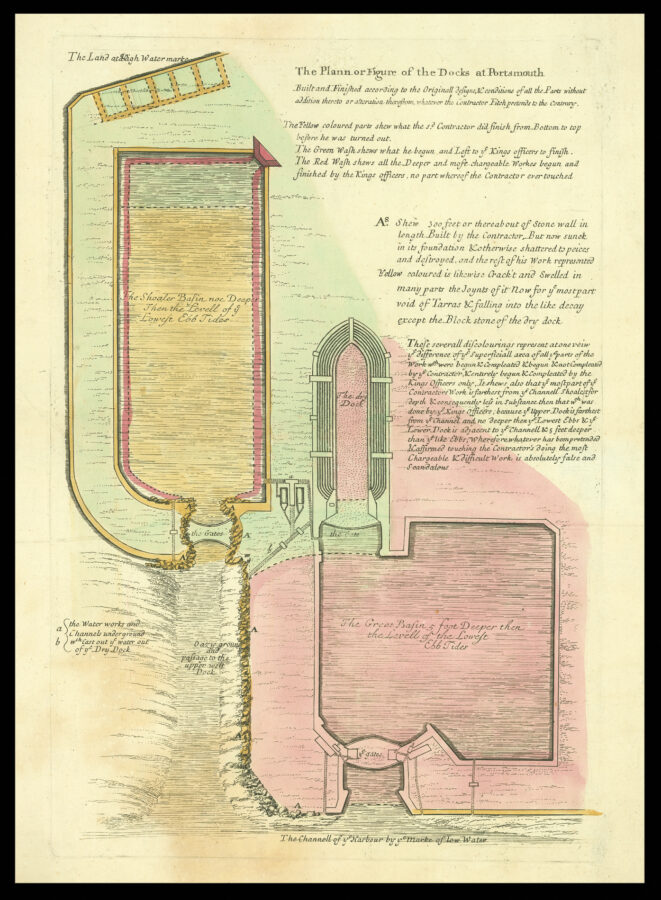 The Plann or Figure of the Docks at Portsmouth Built and Finished according to the Originall designe, & conditions of all the Parts without addition thereto or alteration therefore, whatever the Contractor Fitch pretends to the Contrary.

In 1691, the Admiralty ordered an extensive building programme to expand and improve the dockyard facilities, this work to include the construction of two wet docks, in addition to the existing dry dock, along the lines of a plan apparently drawn by Edward Dummer, then Assistant Surveyor to the Navy. In 1693, Dummer became Surveyor to the Navy.

In that capacity, Dummer supervised the work at Portsmouth; gravely dissatisfied with the quality of the work and the progress, in 1696 he summarily dismissed the contractor responsible, John Fitch (1642–1706). Fitch brought a law suit against the Navy which, in part, he won, being paid for a good deal of the work that he had done, but he was not reinstated. In revenge, he claimed that Dummer had sought bribes from him. Dummer was acquitted, but not exonerated, and his career was finished.

This plan of the Portsmouth docks seems to have been drawn up in relation to the court case between Fitch and the Navy, for the defence, and may be attributable to Dummer himself. As the colour key notes,
​“The Yellow coloured parts show what the s[ai]d. Contractor did finish from Bottom to top before he was turned out. The Green Wash shews what he had begun and Left to ye Kings officers to finish. The Red Wash shews all the Deeper and more chargeble Workes begun and finished by the Kings officers, no part whereof the Contractor ever touched”.

Furthermore, another paragraph of text concludes,
”… Whereof whatever has been pretended & affirmed touching the Contractor’s doing the most Chargeable & difficult Work, is absolutely false and Scandalous.”

The engraving appears to have been performed in two stages (reflecting two states), the second hand evidently that of Herman Moll, notably the lower panel of text at centre right.