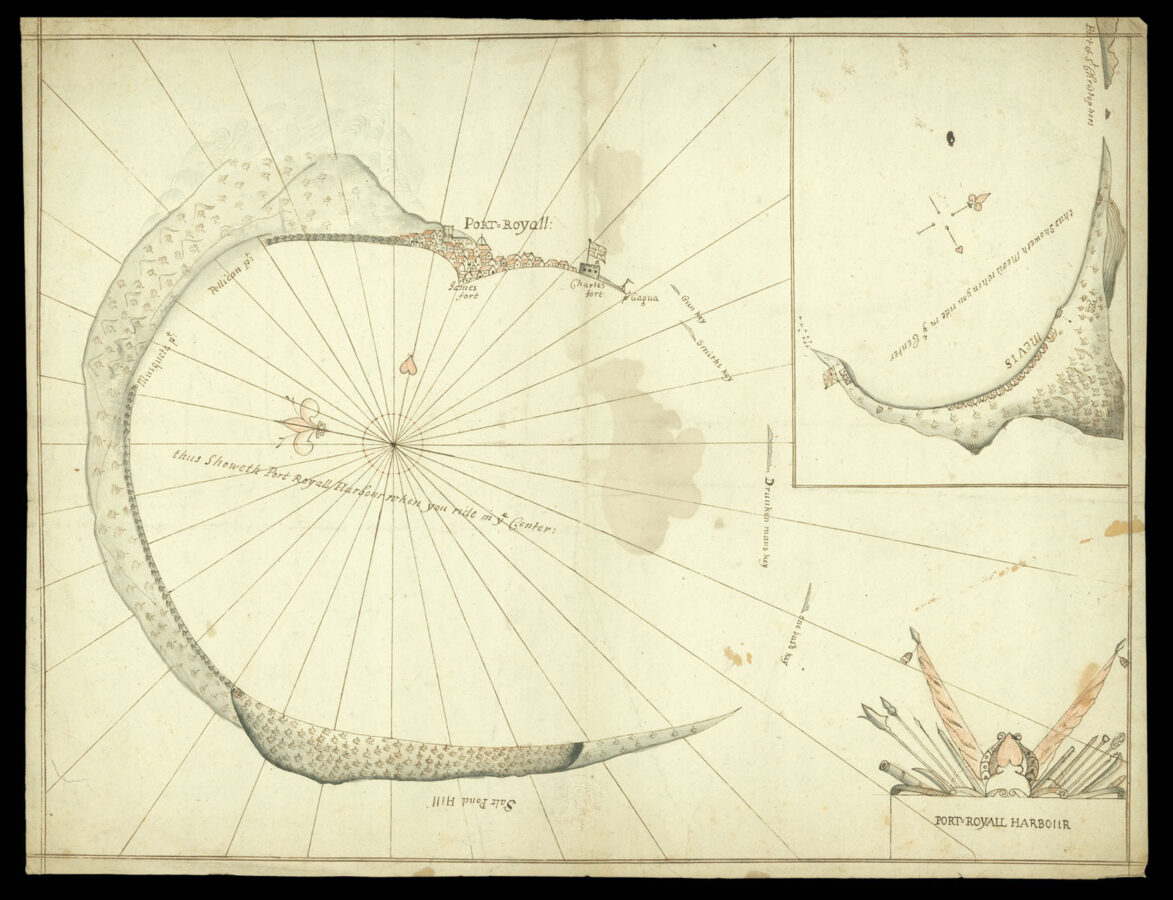 Large scale delineation of Port Royal Harbour, the tip of the Palisades at the mouth of Kingston Harbour. This manuscript was constructed as a coastal recognition profile (a three hundred and sixty degree view) taken from a position at deck level in the centre of the harbour; coastal profiles were popular features on early charts, enabling the user to establish his relative position within a harbour by reference to the sites marked on the profile, particularly useful when entering harbour to avoid underwater hazards.

The likelihood is that this drawing, although undated, depicts Port Royal as it was shortly before the great earthquake of 1692, in which about two-thirds of the town sank between the waves, with the loss of about one-third of the population. As such, it is one of the earliest delineations extant of he harbour.

However, only two of the four forts of the period are marked: Fort Charles and Fort James. Fort Charles was the first fort constructed by the English after their capture of Jamaica from the Spanish in 1655, to protect the mouth of the harbour; it was originally called Fort Cromwell but was renamed after the Restoration of King Charles II. The fort was slightly damaged in the earthquake.

Fort James was constructed in 1673, overlooking the harbour itself, named for James, Duke of York, brother of Charles II. It was completely destroyed in the earthquake.

However, the drawing does not shown Fort Carlisle, constructed in 1678 at the landward end of Port Royal. Fort Rupert, on the far side of the town as the artist was looking is also not marked. Both these were destroyed in the earthquake.

The tip of the Palisades is labelled ​‘Pt. Cagua’; the English originally called the town Cagway, a name originating with the original settlers, the Taino people. ​‘Drunken mans key’ is a feature of other charts of the period, given as ​‘Drunkard’s Key’ on Sir Hans Sloane’s map of the area published to illustrate his article on the earthquake (Transactions of the Royal Society, London, 1694).

The inset depicts the western coast of Nevis, with Charlestown central, and the southern tip of St. Kitts.