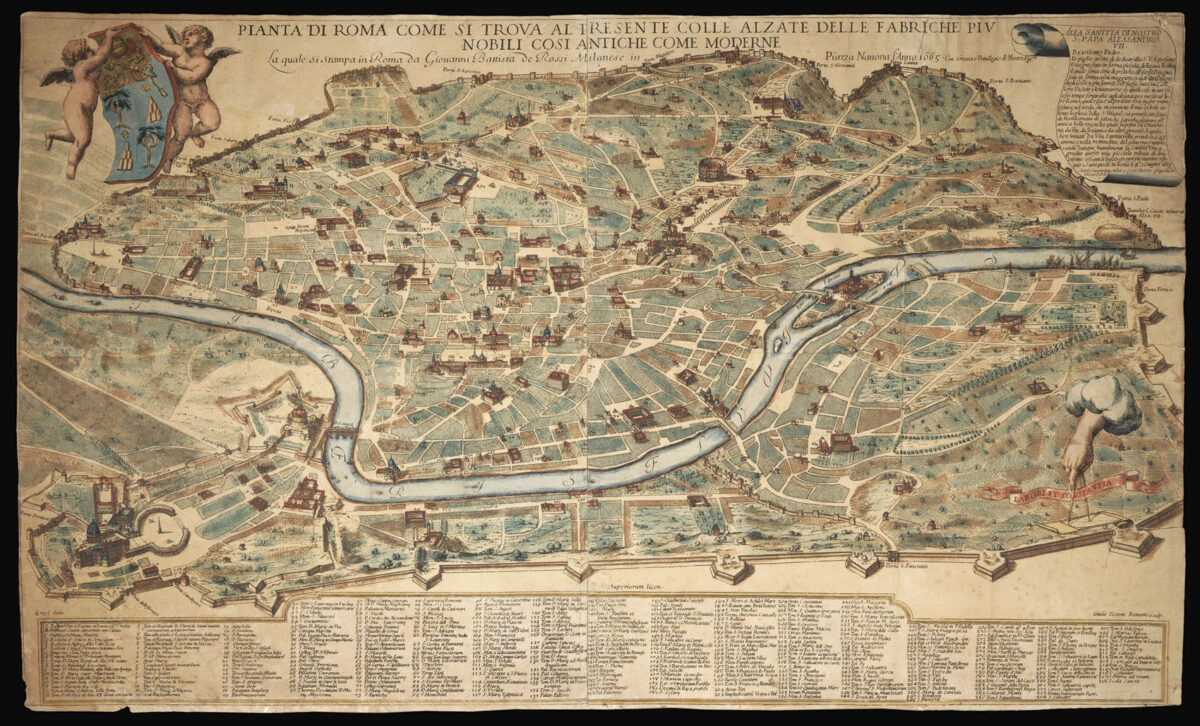 A sweeping and detailed bird’s-eye view of the walled city of Rome oriented to the east, engraved by Giulio Testone after Lieven de Cruyl (1640–1720). The Tiber flows through the centre of the image from left to right. The Vatican appears within its own fortifications to the lower left, and more than 300 important landmarks are noted in the extensive key beneath the view. The title runs along the top edge, the arms of the city are held aloft by a pair of cherubim upper left, and Matteo Gregorio de Rossi’s dedication to Pope Alexander VII, Fabio Chigi della Rovere (1599–1667) is within a scroll cartouche upper right.

The eternal city is portrayed towards the end of the reign of Alexander VII as Pope. He is renowned for improving and beautifying Rome: large areas were cleared to create straighter streets, broad piazzas, and the Collegio Romano. ​“The decorations of the church of Sta. Maria del Popolo, titular church of more than one of the Chigi cardinals, the Scala Regia, the Chair of St. Peter in the Vatican Basilica, and the great colonnade before that edifice bespeak alike the genius of Bernini and the munificence of his papal patron. He was also a patron of learning, modernized the Roman University, known as Sapienza, and enriched it with a magnificent library. He also made extensive additions to the Vatican Library. His tomb by Bernini is one of the most beautiful monuments in St. Peter’s” (Peterson).

Beyond the walls of Rome, Alexander spent many years being antagonized by the young King Louis XIV of France, who had never forgiven him, as a young envoy, for so successfully defending the Vatican’s interests at the Treaty of Westphalia in 1648 that had ended the Thirty Years War. Alexander assisted the Venetians in their long campaign against the Ottoman Empire and in return obtained the restoration of the Jesuits, exiled from Venice since 1606.

Cruyl was a Flemish priest, draughtsman and etcher, active also in Italy and France. In 1664 Cruyl arrived in Rome, where he lived until about 1670. ​“During this time he drew many views of the city (e.g. 18 sheets, Cleveland, OH, Mus. A.) and etched ten plates representing the Triumph of Caesar after Andrea Mantegna’s series (Hollstein, nos 1–10). His etched views of Rome and its surroundings appeared in several contemporary publications. For instance, two series of 25 prints (Hollstein, nos 27–76) were first published in 1667 and were later included in Graevius’s ​“Thesaurus antiquitatum Romanarum” and in F. Desseine’s ​“Het oude en heden daagsche Rome” (Esther).

Rare: only one copy of this issue found in the Herzogin Anna Amalia Bibliothek / Klassik Stiftung Weimar in Germany; the British Library has an example of the second edition.