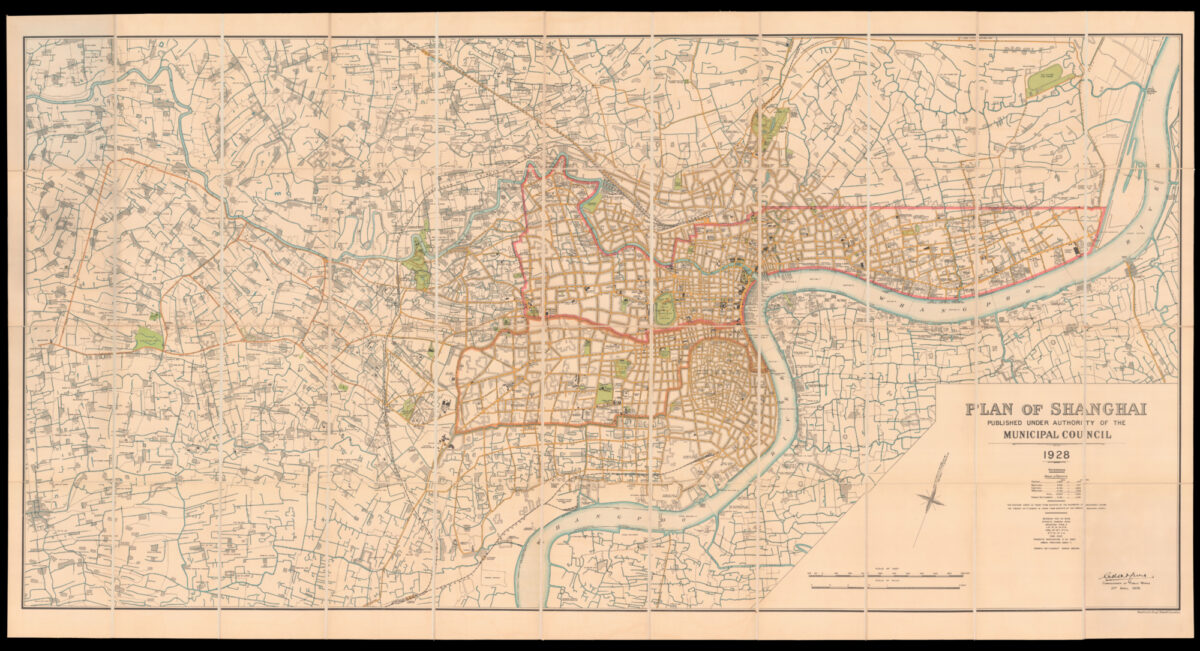 Plan of Shanghai 1928 Published under authority of the Municipal Council 1928.

The map depicts Shanghai city in 1928, with the French Settlements and Shanghai International Settlements hand-coloured in outline in brown and pink. Two lines noted below the title:
1. The Pootung shore is taken from surveys by the Whangpoo Conservancy Board.
2. The French settlement is taken from surveys by the French Municipal Council.
The famous Whangpoo (Huangpu) river in Shanghai is prominently shown from the midpoint of the bottom edge sinuating upwards to the top right corner, which divides the settlements to the left and Pootung (Pudong) to the right. Between the bank of the river and the French settlement, are the ​‘Chinese city’ and a district labeled ​‘Nan Tao’ (Nan Dao).

The ​“Chinese city”, is now called the ​“Old City”, the traditional urban core of Shanghai. Its boundary was formerly defined by a defensive wall. The Old City was the county seat for the old county of Shanghai, with the advent of foreign concessions in Shanghai, it became just one part of Shanghai’s urban core but continued for decades to be the seat of the Chinese authority in Shanghai. It was essentially coterminous with the old Nanshi District — Nan Dao, which is now part of Huangpu District.

An exact copy of the map dated to the same day 21st April 1928, was published in Shanghai, North-China Daily News and Herald, Limited. by permission of the Municipal. It is signed by the same commissioner of public works. We are only aware of a single surviving example, that in the Library of Congress Geography and Map Division Washington, D.C.

Edward Stanford (1827–1904) rose to prominence during the height of the Victorian age a period defined by technological innovation, social upheaval, literary excellence and world exploration. In 1853, Stanford became sole proprietor and expanded his shop to 7 and 8 Charing Cross whilst acquiring premises on Trinity Place for a printing works. This solidified Stanford’s as the largest and only map maker and seller in London at a time when British colonialism, the rise of the railways, and the continuing popularity of the Grand Tour.

Edward Stanford II took over in 1882, when Stanford’s had become the sole agents for Ordnance Survey Maps in England and Wales, and in 1887 published Stanford’s London Atlas Of Universal Geography dedicated to Queen Victoria on the occasion of her Royal Jubilee, and he received his royal warrant as Cartographer to the Queen, in 1893. Edward Stanford II died in 1917 and his son Edward Fraser Stanford assumed control of the business in 1917. This map was made in the succeeding period between the wars, which saw the company continue to innovate and encourage exploration.