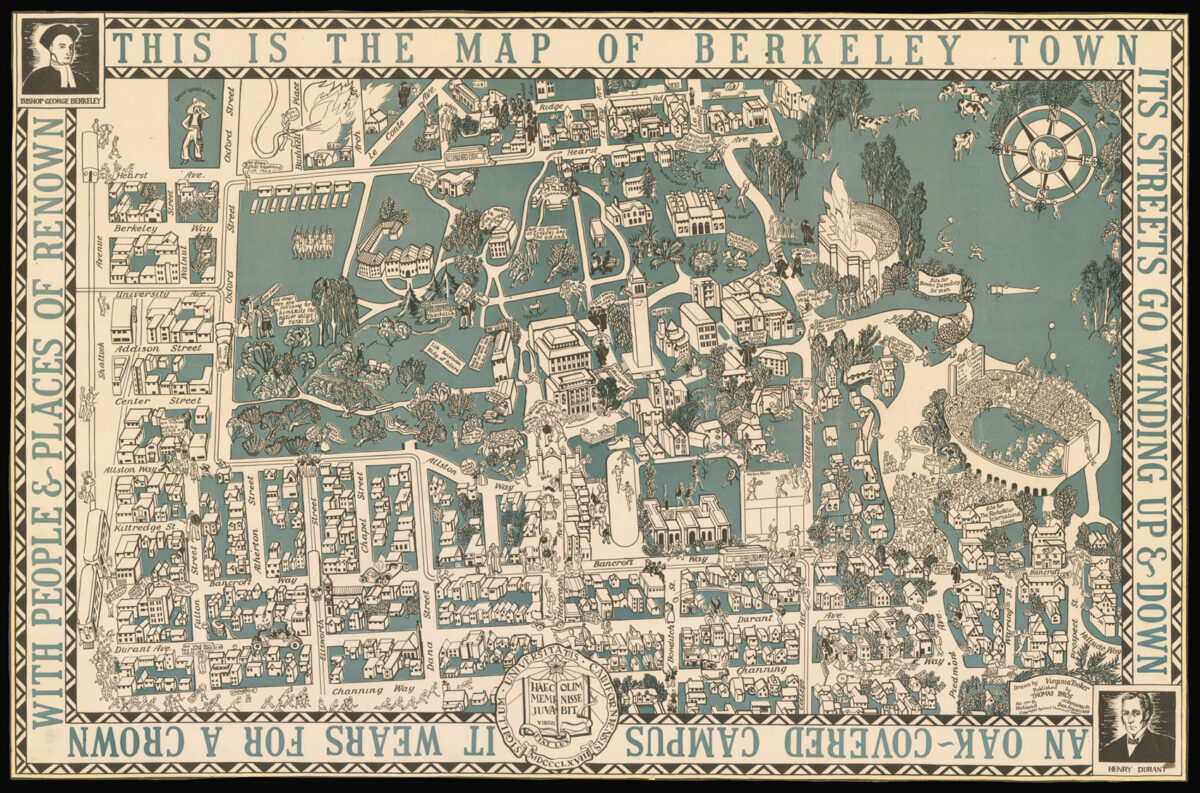 Pictorial map of the University of Berkeley

This is the Map of Berkeley Town its streets go winding up and down, an oak covered campus it wears for a crown with people & places of renown.

Rare pictorial map of the University of Berkeley, California.

This humorous plan shows the architectural transformation of Berkley under John Glen Howard (1864–1931) from the turn of the century to the mid 1920s.

In the late 1890s an international competition was set up to find a suitable architect in order to transform the undistinguished campus into a ​“City of Learning”. Howard did not win the competition; in fact he finished fourth. The winner was Émile Bénard of Paris. However when Bénard travelled to Berkeley, he managed to insult virtually everyone he met, and persuaded the Californians that he was not to be entrusted with the execution of any of his work. Howard due to his local proximity (he was based in Los Angeles) was appointed to the advisory council to oversee the implementation of Bénard’s designs; and in 1901 was appointed as the supervising architect of the University.

Howard developed a style of architecture that was inspired by stately classical lines. Among the campus landmarks built during his tenure were the Hearst Memorial Mining Building (1902–7), the Hearst Greek Theatre (1903), California Hall (1905), Doe Library (1911–17), the Campanile (1914), Wheeler Hall (1917), Gilman Hall (1917), and Hilgard Hall (1918). Other notable buildings on the plan include the California Memorial Stadium (1923); and the Stephens Hall (1924). This ensemble of buildings helped transform what had been a somewhat pedestrian institution into a true ​“City of Learning”.

Virginia Tooker was born in 1904 in Spokane, Washington. She studied Mills College in California and later attended both the Chicago Academy of Art followed by the University of California. She moved to Carmel by the sea and struck up a friendship with Pauline Schindler, editor of The Carmelite, and her circle of friends who were influential in promoting modern art in Southern California. This map was likely produced by Virginia during her time in California in the late 1920s. The publishers the Thomas Brothers were known to have published several maps and plans of California between the late 1920s to the mid 1950s.

Virginia went on to marry the composer and pianist Imre Weisshaus and spent some time in Germany, where she enrolled as a student at Bahaus Dessau. After their short-lived marriage she went to Switzerland with her soon to be second husband Hin Bredendieck, who was working for Sigfried Giedion in Turgi and Zurich.

The couple married and had two children together and returned to the US to settle in Chicago. Hin Bredendieck taught at the New Bauhaus Chicago while Virginia translated his courses into English. She also took up book illustration as a freelance artist at this time and remained in the arts until her death in 1988.

We are only able to trace five institutional examples: Pennsylvania; Cleveland Public Library; California Historical Society; University of Berkeley; and University of California.