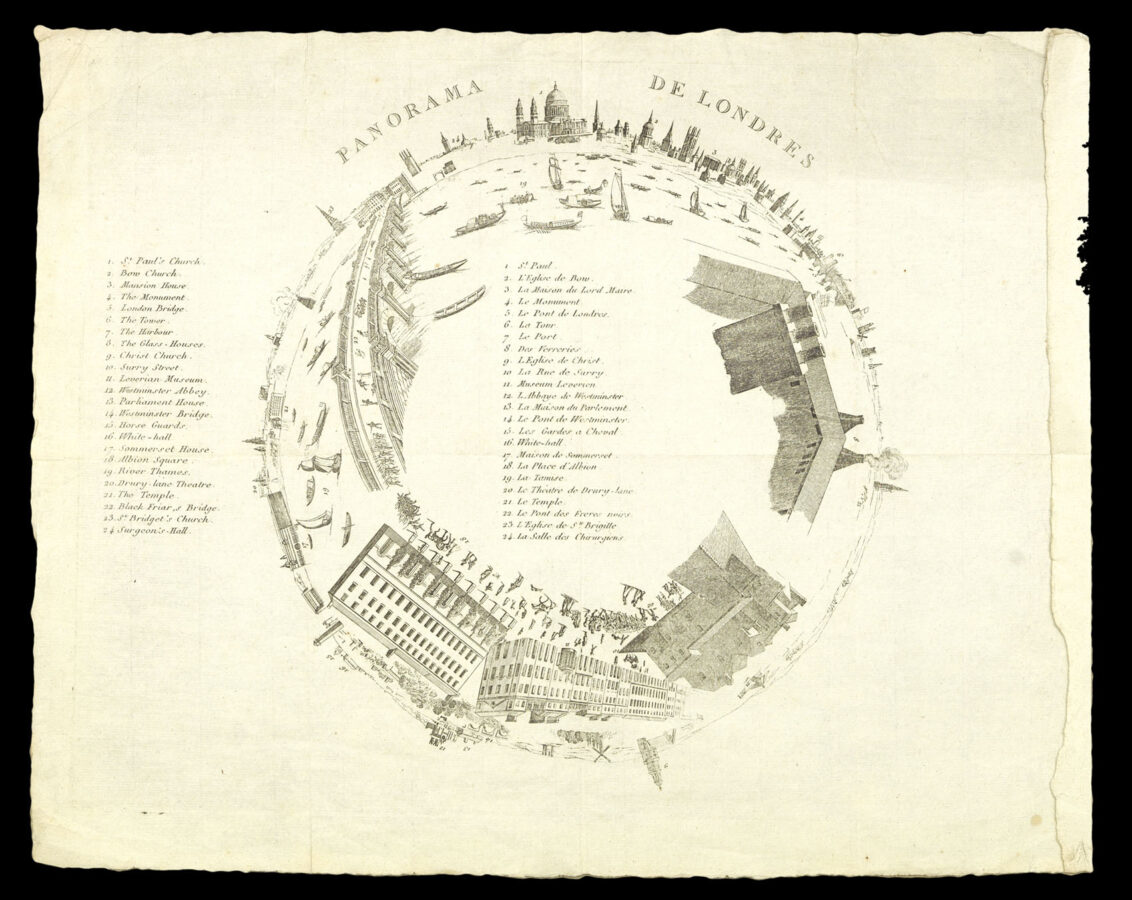 The keysheet was produced to accompany an explanatory leaflet for Robert and Henry Aston Barker’s ​‘Panorama of London painted as if viewed from the roof of Albion Mills on the South Bank’, and covers St. Paul’s, the Tower, Westminster Bridge, Whitehall, Leverian Museum, and the Temple in a circular view. Slight misspellings of the place names indicate that this plate, which was to accompany a brochure explaining a large cylindrical painted panorama of the capital, was produced in France.

Panoramic paintings became popular in the nineteenth century. The word ​“panorama”, from the Greek ​“pan” (all) and ​“horama” (view), was coined by the Irish painter Robert Barker in 1792 to describe his view of Edinburgh painted on a cylindrical surface. Barker’s inability to bring the image to a full 360 degrees disappointed him. To realize his true vision, Barker and his son, Henry Aston Barker, took on the task of painting a scene of London from the roof of the Albion Mills on the South Bank. Barker’s accomplishment involved sophisticated manipulations of perspective not encountered in the panorama’s predescessors, the wide-angle ​“prospect” of a city familiar since the sixteenth century, or Wenceslaus Hollar’s ​“long view” of London, etched on several contiguous sheets. When Barker first patented his technique in 1787, he had given it a French title: La Nature à Coup d’Oeil (“Nature at a glance”). In 1793, Barker moved his panoramas to the first purpose-built panorama building in the world, in Leicester Square, and made a fortune. Viewers flocked to pay a stiff three shillings to stand on a central platform under a skylight, and get an experience that was ​“panoramic” (an adjective that didn’t appear in print until 1813). Visitors to Barker’s Panorama of London could purchase a series of six prints that modestly recalled the experience; end-to-end the prints stretched 3.25 metres. In contrast, the actual panorama spanned 250 square metres. Due to the immense size of the panorama, patrons were given orientation plans, such as the present example, to help them navigate the scene.

Barker made many efforts to increase the realism of his scenes. To fully immerse the audience in the scene, all borders of the canvas were concealed. Props were also strategically positioned on the platform where the audience stood and two windows were laid into the roof to allow natural light to flood the canvases. Barker’s Panorama was hugely successful and spawned a series of ​“immersive” panoramas: the Museum of London’s curators found mention of 126 panoramas that were exhibited between 1793 and 1863.