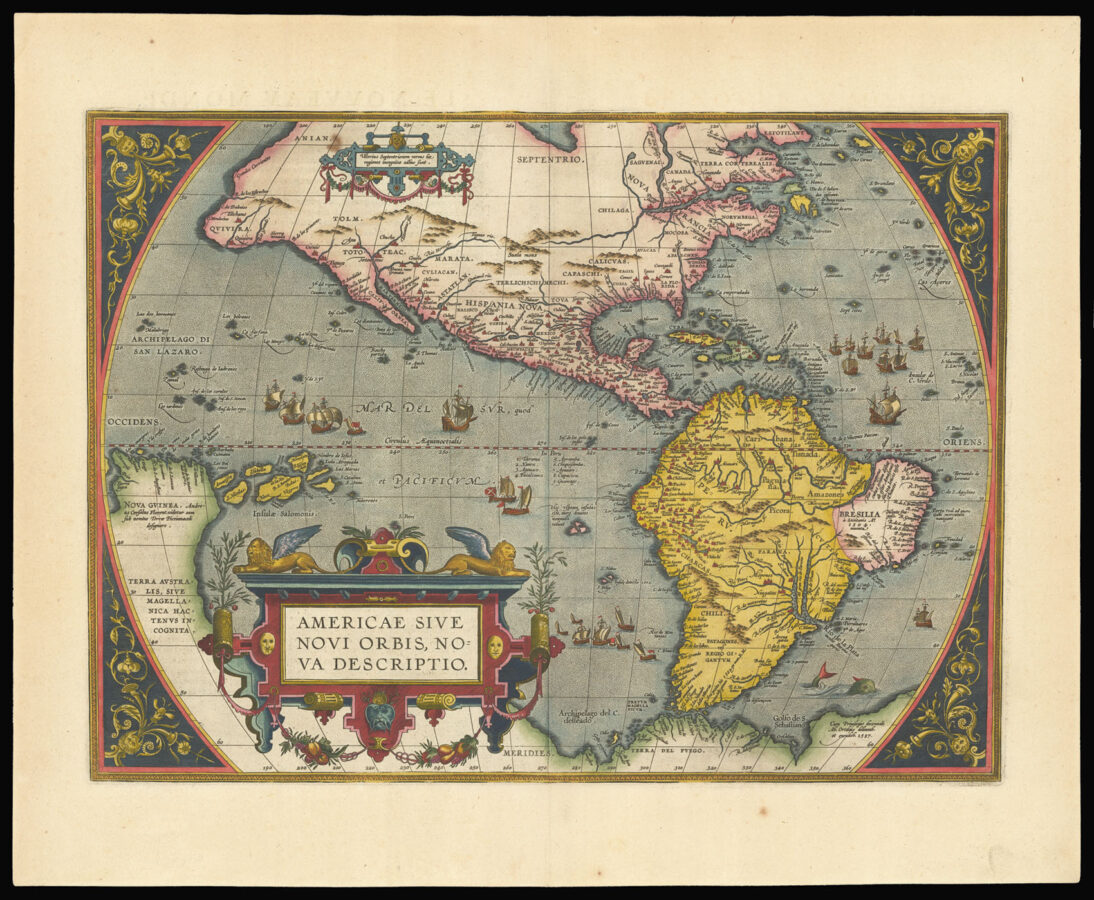 Ortelius’s map of the Americas

A fine example of Ortelius’s highly decorative map of the Americas.

Ortelius’s map of the Americas first appeared in his ​‘Theatrum’ of 1570, based on Gerard Mercator’s world map of 1569. This is the third and final state, with a corrected shape of South America and the addition of the Solomon Islands as well as additional names, including C.Mendocino, added to the north west coast. Furthermore, this is the only one of the three plates which is signed by Ortelius as responsible for the preparation of the map. Ortelius America ​‘was widely sold throughout Europe and had a great influence on the future cartography of the New World’ (Burden).

​“All the elements of the modern atlas were brought to publication in Abraham Ortelius’ ​“Theatrum Orbis Terrarum”. This substantial undertaking assembled… the best available maps of the world by the most renowned and up-to-date geographers… each of Ortelius’ maps was engraved specifically for his atlas according to uniform formats” (Shirley).

Ortelius first published his ​‘Theatrum…’, arguably the first atlas in the modern sense of the word, in 1570, with 70 seventy copper engravings on fifty-three double-folio pages. A businessman native to Antwerp, Ortelius compiled the best existing maps, re-engraved them on a standardized format, and included them with the text in one volume. But, by 1570, he had been dealing in maps and charts for more than twenty years. The death of Ortelius’ father in 1535, who had been a wealthy merchant, seems to have placed his family in financial difficulties. When Ortelius was as young as 19 he is recorded as having joined the Guild of St. Luke as ​‘afsetter’ ​“or colourist of maps and prints. He seems to have reached a very advanced level of skill in this craft, as some customers continued to insist on buying atlases coloured by him personally at a time when he had already developed into a publisher and cartographer/​merchant… Ortelius [also] became a trader in books, prints and maps. Much of this trading had to do with the house of Plantin [subsequently publisher of the ​‘Theatrum’]…Soon he was attending the book fair in Frankfurt to buy and sell books, maps and prints for others as well as for himself. He first met Gerard Mercator there in 1554, which marked the state of a life-long professional relationship and personal friendship… ” (van den Broecke page 14).

Through his work Ortelius became quite the cosmopolitan, he travelled extensively to France, Germany, Switzerland, Austria, Hungary, Italy, England and Ireland, and as a result had command of several languages. With the publication of the ​‘Theatrum’ came tremendous success and wealth. Giving full credit to the original cartographers, the ​‘Theatrum’ was so successful that it was printed three times in 1570 alone. In 1574 Ortelius retained the position of Royal Cosmographer to Phillip II and was given a fine gold necklace, worth 1000 ducats. Between 1570 and 1612 the atlas was published in 42 editions and the 7 languages: Latin, German, Flemish, French, Spanish, English and Italian

Ortelius and Plantin were lifelong friends, and eventually published five editions of Ortelius’s ​‘Theatrum orbis terrarium’ and four of his ​‘Addimenta’ (being a supplement to earlier editions for their owners) together. Their first recorded transaction occurred as early as January of 1558, when the young Ortelius, described in the Plantin archive as ​‘paintre des cartes’, bought a copy of Virgil from Plantin. Soon Ortelius was colouring maps for Plantin, and when Ortelius began producing his own atlases in 1570, Plantin bought them in large quantities for resale. ​“Between June 13 and December 31, 1570 Plantin sold no less than 159 copies of the Theatrum… From 1579 onwards, Plantin is the printer, but not the publisher of the ​‘Theatrum’. Ortelius himself finances the printing” (Peter van der Krogt ​“The Theatrum Orbis Terrarum: The First Atlas?”, in Abraham Ortelius and the First Atlas: Essays Commemorating the Quadricentennial of his Death 1598–1998, page 65).

Although Plantin was the major distributor of the ​‘Theatrum’, he was not the only one, and he had his own network of distributors, even an affiliated a bookshop in Paris ​“run by his son-in-law Aegidius Beys [who] was an important buyer of Plantin’s productions. This Parisian bookshop also soon became the most important buyer of the ​‘Theatrum’ ” (Ibid page 81). The bookshop closed in 1577 and the stock was sold to the dealer Michel Sonnius, who received the monopoly for the sale of Plantin publications in Paris.

A hiatus occurred in the production of the the ​‘Theatrum’ when in 1575 Ortelius fled from Antwerp to England, via Paris (1577), Frankfurt (1578), Venice and Rome (1578) to escape the ​“Spanish Fury”, the sacking of Antwerp by the Spanish in 1576. This in spite of the fact that in 1574 Ortelius retained the position of Royal Cosmographer to Phillip II and was given a fine gold necklace, worth 1000 ducats, as a sign of his office. ​“In the general uprising of the Netherlands in 1576, both Catholics and Calvanists joined forces. But the ensuing excesses committed by the Calvinist die-hards in the South, drove many Catholics back into the Spanish camp. Thus the ​‘reconquista’ of the South began. In this South, Antwerp, since 1577 dominated by the Calvinist party, was the last stronghold to capitulate after a long siege in August 1585. The Eighty Years’ war was to continue until 1648, but from 1585 the Netherlands were cut into two halves: the North dominated by the Calvinists, which became the independent Republic of the United Provinces, and the South, regained by the Spanish sovereigns, where Calvinism was virtually stamped out, no longer by violent means, but by way of propaganda and persuasion. Antwerp, the great Southern Calvinist bulwark in the years 1577 to 1585, became the staunchest pillar of the Southern Catholic Counter-Reformation” (Leon Voet ​“Abraham Ortelius and his World”, in Abraham Ortelius and the First Atlas: Essays Commemorating the Quadricentennial of his Death 1598–1998, page 27). It was only in 1579 when Ortelius returned to Antwerp, that a new edition of the Theatrum was printed. For the first time Plantin was responsible for the printing of the accompanying texts. From this edition onwards, the Plantin Press would continue to see the printing of the texts for virtually all the editions of the atlas until Ortelius’ own death in 1598. 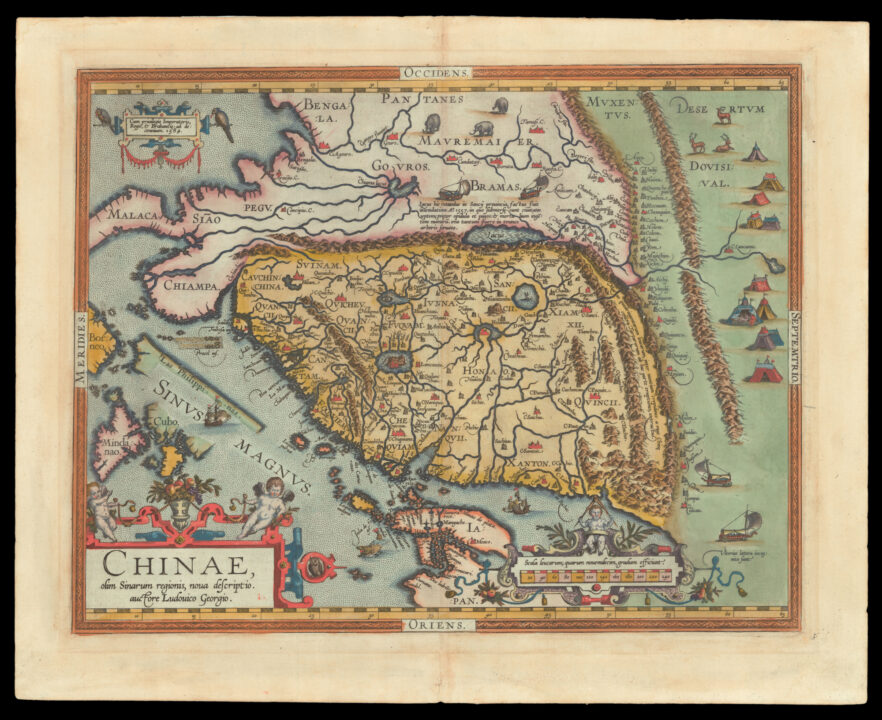