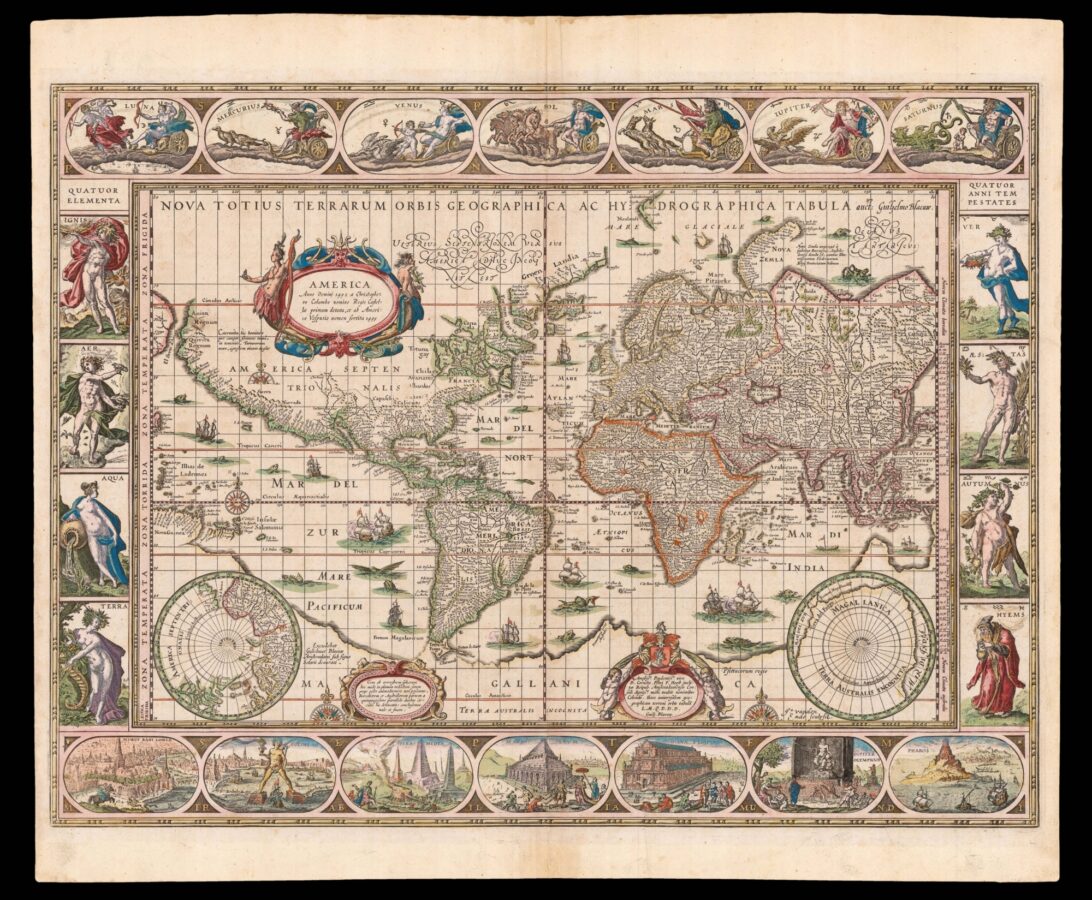 “One of the supreme examples of the map maker’s art”

Blaeu’s world map was first published separately in 1606 as a reduced version of his large world map of 1605. Its clarity, detail, and striking classical ornamentation makes it ​“one of the supreme examples of the map maker’s art” (Shirley).

The map is shown on Mercator’s projection with a massive southern continent attached to New Guinea, with the toponyms ​“Beach” and ​“Psittacorum region” taken from Marco Polo’s travel memoirs. North America has the westward bulge characteristic of the time, with the ​“Strait of Anian” noted. Korea is shown as an island and Japan is in a kite-like shape.

The border of vignettes provide information on terrestrial and celestial cycles. The vertical borders contain allegorical representations of the four elements and the four seasons — they are linked by the zodiac symbols in each of the vig nettes showing the seasons. The zodiac signs are arranged in their seasonal triplicities, which represent one element giving way to another: for example, the spring triplicity of Aries, Taurus and Gemini represents water becoming fire.

The upper border, as is fitting for its content, shows the ​“septem planeta”, including the sun and moon, as classical deities with their planetary symbols riding in chariots, suggesting their orbit. At the bottom are the seven wonders of the world: the Hanging Gardens of Babylon, the Colossus straddling the harbour at Rhodes, the Pyramids, the Mausoleum of Halicarnassus at Cairo, the Temple of Diana, the Statue of Jupiter and the lighthouse at Alexandria. Two small projections of the poles appear in each corner, there are three decorative cartouches, one concerning the discovery of North America.

The present example is the fourth state: ​“Terra del Fuego” is shown as an island; ​“Fretum le Maire” added to the bottom of South America; and the title changed to conclude ​“auct: Guiljelmo Blaeuw”.