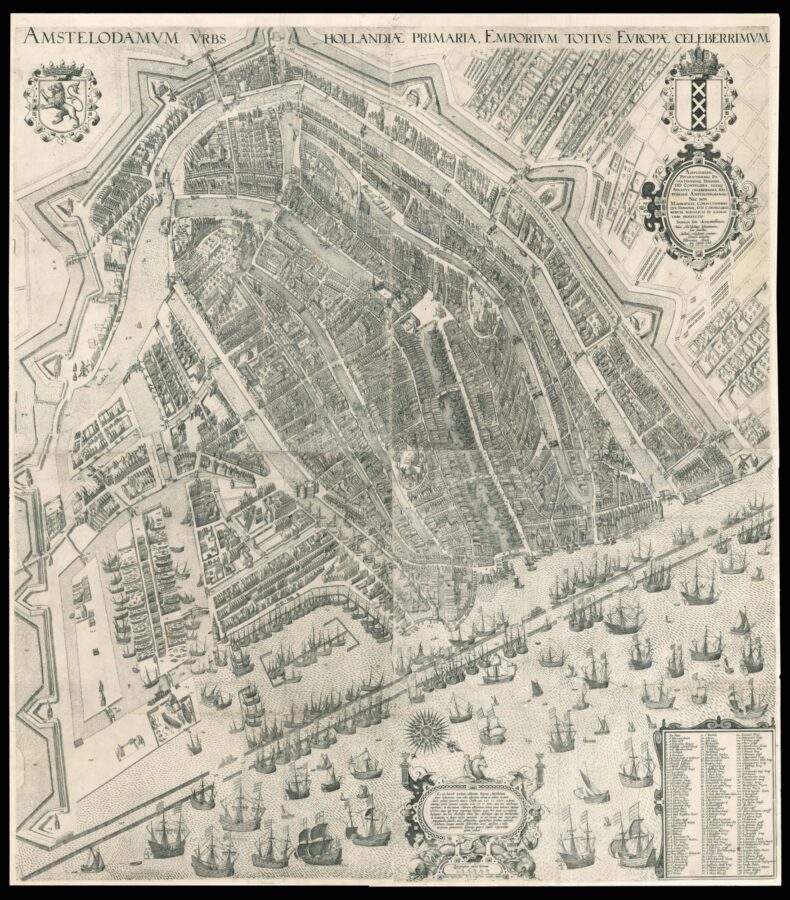 One of the most influential maps of Amsterdam

The final state of one of the most famous and influential maps of Amsterdam, first published in 1597. Pieter Bast (c.1550–1605) produced the first town plan of Amsterdam for half a century, updating Cornelis Anthonisz’s woodcut view of 1544. He may also have drawn on Braun and Hogenberg’s view of Amsterdam from ​‘Civitates Orbis Terrarum’ (1572) (see item 11). It became the standard ​“for the critical period to 1625, the year of Balthasar Florisz van Berkenrode’s celebrated ground plan. During these three decades prior to 1625 Amsterdam evolved from a provincial emporium to a world capital … Bast recorded the appearance of Amsterdam at a singularly momentous point in its history … Bast’s print is no mere representation; it is a portrait” (Keyes).

As the primacy of Antwerp in the Low Countries slipped away at the end of the sixteenth century, Amsterdam moved to take its place. The city took in religious refugees and economic migrants alongside a growing native population, absorbing their skills and wealth. When Bast first made the map, the total area of the city remained the same as it had been a century before, while the population had quadrupled over the same period. The map shows the extensive building required by the expanding population: Anthonisz’s 1544 plan had 52 bridges, but Bast’s has twice that number. It also shows the source of the wealth driving Amsterdam’s expansion, through the fleet of ships bobbing in the harbour. At the lower left, the shipyard has been brought within the city walls, a reflection of the importance of the industry in Amsterdam’s East Indies trade after the foundation of the Dutch East India Company (VOC) in 1602.

The first edition of 1597 was followed by Herman Allard’s edition of 1599, which was considerably altered, including the addition of the title and Allard’s dedication to the burgomasters. After Pieter Bast’s death in 1605, Claes Jansz. Visscher probably acquired the plates, producing a new edition around 1606 in which the medieval walls were replaced by a ​“gracht” (large canal) encircling the city on the landward side. He would also use Bast’s work to create a ​‘Profile of Amsterdam’ in 1611, combining a panoramic view of the harbour with text. The present edition includes several innovations, the most important being Hendrick de Keyser’s famous stock exchange, the first in the world, finished in 1611. It has a key to 150 numbered locations. Under number 100 it lists ​“d. niewe waegh” (the new weigh house). The weigh house was moved into the Sint Anthonispoort (Saint Anthony’s Gate) in 1617–1618, suggesting that the present edition of the plan was printed in or after 1618, but certainly before 1625, the year in which Balthasar Florisz van Berkenrode published a new plan, superseding Bast’s.