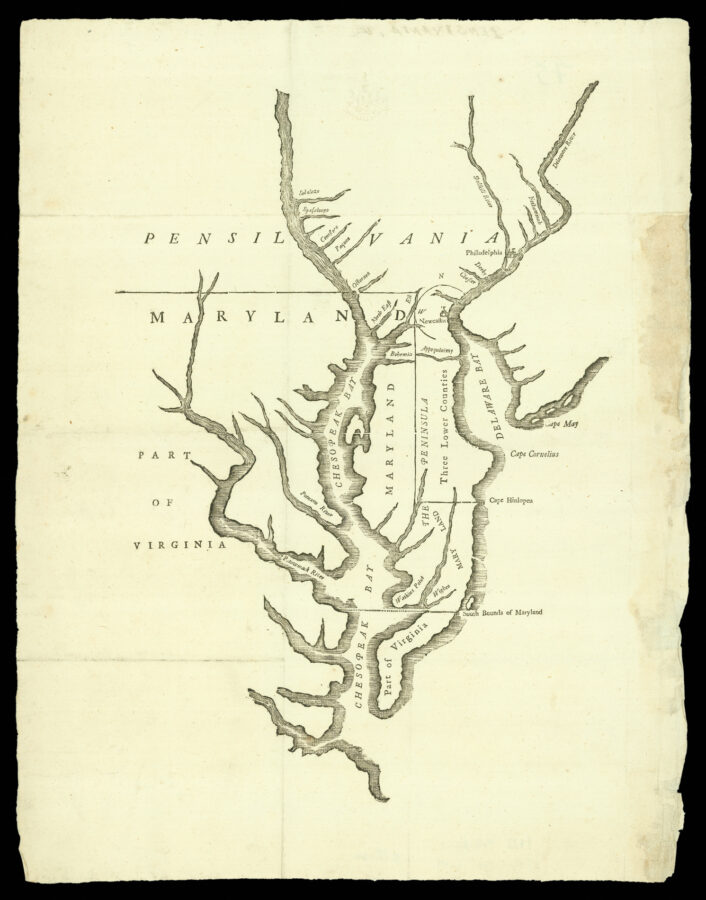 One of the most important printed maps in American political history

[Untitled map of Delaware and Maryland, with parts of Virginia and Pennsylvania: (from Charles Calvert, 6th baron Baltimore, Articles of agreement made and concluded upon between the Right Honourable the Lord Proprietary of Maryland, and the Honourable the Proprietarys of Pensilvania, &c. touching the limits and boundaries of the two provinces. With the commission, constituting certain persons to execute the same. … Philadelphia : Benjamin Franklin, 1733)].

The exceedingly rare Woodcut Map of the Middle Colonies, printed by Benjamin Franklin; and the first map printed in the English Colonies south of New York.

The map was born out of the desire for the Proprietors of Maryland (Lord Baltimore and the Calvert family) and of Pennsylvania (the Penns) to resolve the long-running boundary dispute between the two colonies. In 1731 Lord Baltimore produced a map which he insisted be used as the basis for the agreement and, accordingly, it was, drawn and engraved at Senex’s printing house in London, and published in the official text of the agreement.

It was at that point that Baltimore realized he had made a mistake in the map, and tried to have the agreement thrown out. In London, the original text (with map) was reprinted; as part of their response, the Penns also approached Ben Franklin to print an American edition of the Agreement, which appeared in 1733, in a print-run of five hundred copies. Wheat and Brun record a receipt bill, dated June 1733, that includes Franklin’s charge ​“for cutting the Mapp in Wood £2”. The Franklin map differs from the London printing by the absence of a double line border.

The map, without cartouche or title, shows Chesapeake Bay, the Three Lower Counties (Delaware), and large portions of Pennsylvania, Maryland, New Jersey and Virginia. The most prominent features of topography are shown, including the cities of Philadelphia and New Castle, the Delaware, Susquehanna (with many tributaries named), Potomac and the Potapsco (“Potaxon”) rivers and Capes May, Cornelius and Hinlopen. The boundaries established by the Agreement are carefully delineated with a dotted line, starting with a trans-peninsular line from the fictitious ​“Cape Hinlopen” (actually Fenwick’s Island), a circle drawn with New Castle at its center, the tangent line connecting the two, and a portion of the crucial east-west line. (Phillips, Maps of America, p.671).

When the court case was finally settled, the boundary line was established by the surveyors Charles Mason and Jeremiah Dixon, the famous Mason-Dixon line, later perceived to be the dividing line between the northern and southern states.

As such, this is one of the most important printed maps in American political history.