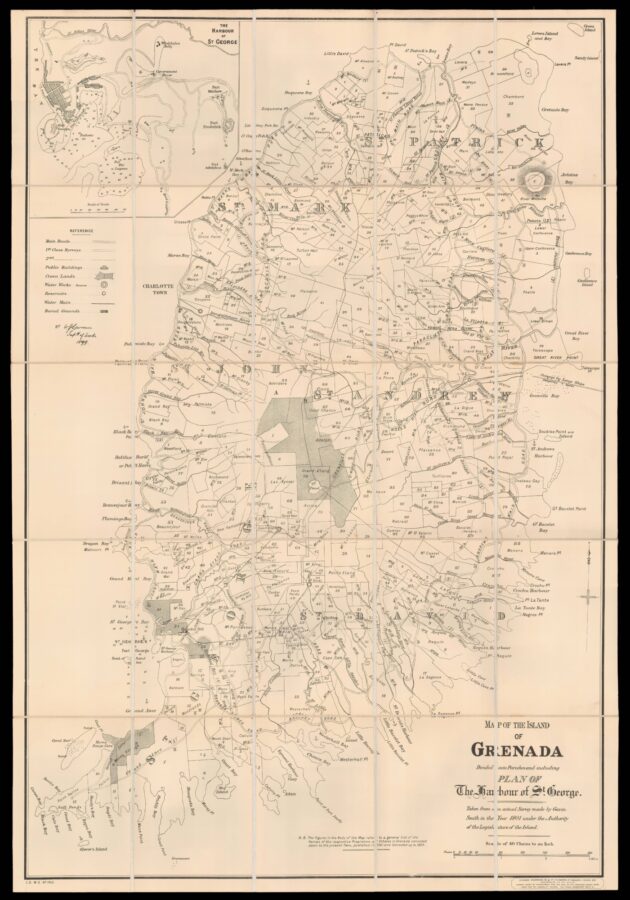 Map of the Island of Grenada Divided into Parishes and including a Plan of The Harbour of St. George. Taken from an actual Survey made by Gavin Smith in the Year 1801 under the Authority of the Legislature of the Island.

The chart depicts the Caribbean Island of Grenada, which was a British Colony until the 1974. It depicts the partition of the land into different estates and names their owners. A note at the bottom of the map states, that these figures have been constantly updated and corrected. Furthermore, it names all bays and islands surrounding Grenada and possible anchor spots. An additional map in the top left corner focuses on the harbour of the city St. George. The harbour is circled by four forts which refer to Grenada’s position as an issue between French and English colonial interests.

The map was originally compiled by Gavin Smith in 1801, published in 1806, and updated in 1824, to show the increased partitioning of the island during early British rule, with many new estates being sold in the interior of the island. The map’s importance to the island’s administration is demonstrated, when it was reissued in 1899 (the present work) by the Intellegence Department of the War Office, and signed off by the then Superintendent of Public Works, W.J. Lawrence. Lawrence has augmented Smith original map to include, main roads, first and second class byways, public buildings, water works, reservoirs, water mains, and burial grounds.

Scale: 2 inches to one statute mile.