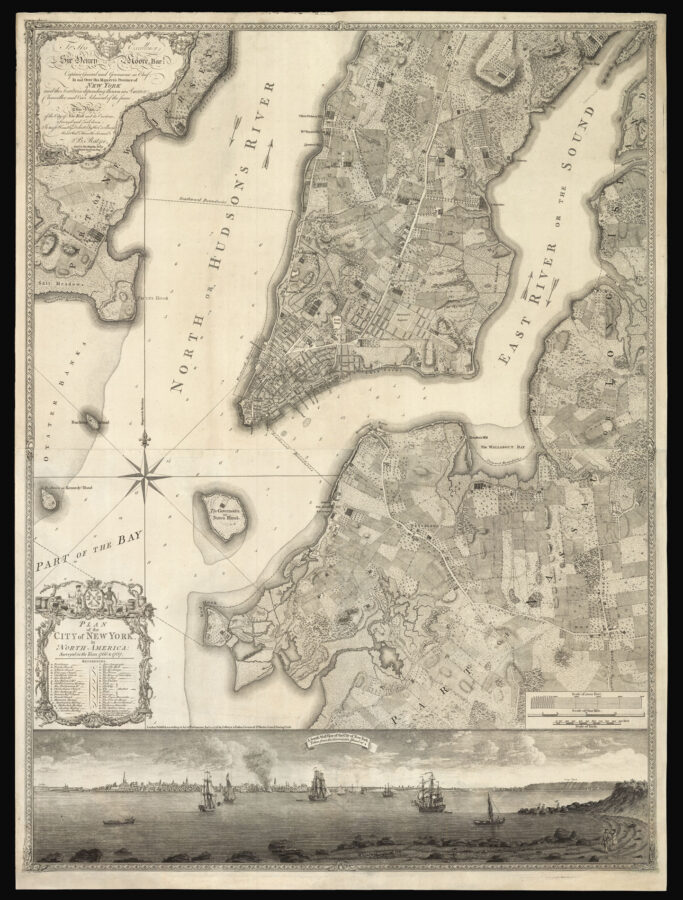 This superb and elegant map takes in the southern end of Manhattan island, as far north as 50th Street today, the marshy New Jersey shores of the Hudson, Kennedy, Bucking and Governors Islands, and parts of present day Brooklyn along the East River. It shows the city of about 25,000 people, surrounded by countryside that includes much of Manhattan and Brooklyn. The view at the bottom, ​“A South West View of the City of New York, Taken from the Governours Island at *” is after a watercolor by Captain-Lieutenant Thomas Davis. The title and list of references appears within a rococo cartouche lower left, the dedication to Sir Henry Moore, the Governor of New York, in another upper left, a scale lower right.

The map is a ultimate culmination of Ratzer’s surveys of 1766 and 1767. The first map generated by those surveys, his ​“Ratzen” plan of just the city, was sent back to London and engraved by Thomas Kitchen, Hydrographer to the Duke of York and later the King, and published in 1769, with Ratzer’s name misspelled. By about 1770 a more extensive plan of the city and its environs was completed and published undated by Kitchin. The present map was published, unchanged, by Jefferys and Faden, although it was rarely included in Faden’s ​“North American Atlas” of 1777, and the map remains exceptionally rare.

Bernard Ratzer served in the British Army in the 60th or American regiment, surveying the east coast of North America during the French and Indian War and later the Revolutionary War. His earliest known map is a manuscript chart of Passamquoddy Bay in Maine in 1756. Various other manuscript plans of forts followed, and he collaborated with Sauthier on his survey of New York, published in 1776. In 1769 Sir Henry Moore gave him the task of surveying the New York — NewJersey border.

Ratzer’s map is a significant improvement his earlier plan: the wharves along the Sound are shown and the streets given names, new buildings and streets on either side of the Bowery are entered, and Ratzer has included careful topographical surveys of the eastern tip of long island adjacent to ​‘The Sound or East River’. ​“The Methodist Meeting House, not completed until 1768, is identified, and the scale has been reduced by half – 800 feet to one inch. The enlarged area extends north to approximately present 42nd street, and the New Jersey Shore and Long Island bordering the East River are included. The cultivated fields, roads, buildings, and names of chief property owners are shown in remarkable detail” (Cumming).