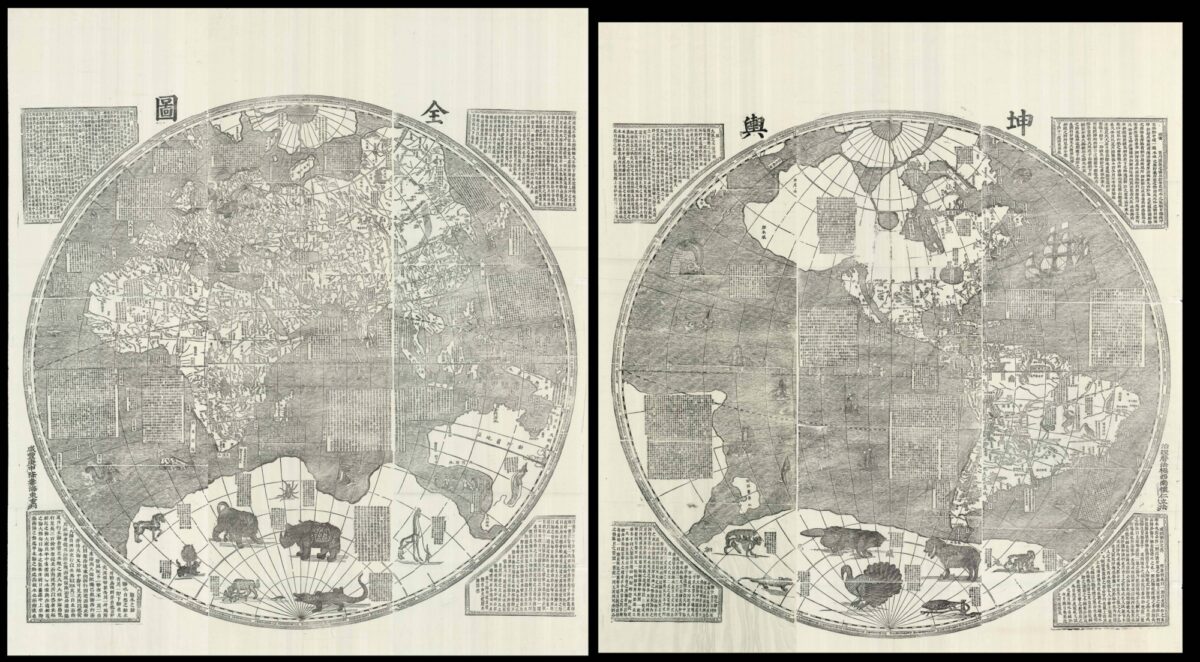 Kunyu quantu 坤與全圖 [A Complete Map of the World].

Verbiest’s original is as rare as its forerunner produced by Matteo Ricci at Beijing in 1602 (or its now-lost predecessors).

Kunyu quantu 坤與全圖 (A Map of the Whole World), was first produced in 1674 by the Jesuit Father Ferdinand Verbiest 南懷仁(1623–1688). Commissioned by the Second Qing Emperor Kangxi 康熙 (1654–1722, r. 1661- 1722), it is one of the largest woodblock-printed maps of its type. It consists of two hemispheres, reversing the conventional European positioning so that China and the Pacific are toward the centre, with the prime meridian running through Beijing. Cartouches are depicted surrounding the hemispheres containing information on the size, climate, landforms, customs and history of various parts of the world and details of natural phenomena such as eclipses and earthquakes. Sea creatures cavort in the waves, a six-masted trading vessel sails the Atlantic, and exotic animals populate the southern continent. Columbus’ discovery of America is also discussed. Images of ships, real and imaginary animals, and sea creatures pepper both hemispheres, creating a visually stunning as well as historically important object. The present 1860 reprint is easily distinguished from the 1674 by the addition of a new imprint in Chinese (accompanied with a chop in this example), and by the fact that the text in the spandrels of the original is within differently-shaped frames. The prototype of this map is probably the world map by Joan Blaeu in 1648, and has been revised on the basis of Chinese maps so that it approaches a sino-centric worldview.

The map was published to mark the official return to favour of the Jesuits in China. Beginning with Ricci at the end of the sixteenth century, the Jesuits were really only tolerated in China as scientific advisers and were not allowed to embark on a general mission throughout the country. Nevertheless the influence at the imperial court of Ricci’s successor, Adam Schall von Bell, aroused the jealousy of imperial agents who, on the pretext of the Jesuits supposedly preparing the way for Portuguese occupation, had Schall von Bell and five assistants sentenced to death in 1664. Schall von Bell was reprieved, but his Chinese assistants were executed and all the priests in China were rounded up in Canton with a view to being expelled. It wasn’t until 1667 when the young Emperor Kangxi began to take a hand in the affairs of government and made friends with Schall’s successor, Ferdinand Verbiest, that the measures taken against the Christians were rescinded and the position of the Fathers made secure.

Verbiest arrived in China after the Ming dynasty had fallen to the Manchu-ruled Qing dynasty. Highly skilled in many disciplines, he became a court adviser, working especially closely with Emperor Kangxi. Kangxi was astute in using the service of Jesuit missionaries in ways that furthered his own political power, and he enlisted Verbiest’s aid with astronomical predictions, calendrical studies and ballistics. His Kunyu quantu was one of a series of maps produced by the Jesuits at the Court in Beijing, beginning with Matteo Ricci’s two woodcut maps of 1584 (single hemisphere) and 1602. Verbiest wrote Kunyu tushuo 坤與圖說(Illustrated Discussion of the Geography of the World) in the same year to assist with the interpretation of the map.

An example of a synopsis by Verbiest in the cartouche to the left of the title next to the character 圖 examines the qualities of the Aristotelian principle of the element air. Verbiest refers to air in this manner to distinguish it from the traditional Chinese concept of Qi, the breath or life force. He applies reason to support its existence: ​“If one says that air does not exist because it has no colour or shape, then will one say that all invisible things—the sound of wind, smell, ghosts, and souls of human and other species—do not exist? When the external eyes cannot see, the internal eyes of reason will understand.“

The map represents that the geographical and cartographical thoughts of Europeans have influenced in China in the seventeenth century, and is a good example of the cultural exchange between European and Chinese Cartography, by means of the activities of the Jesuits. 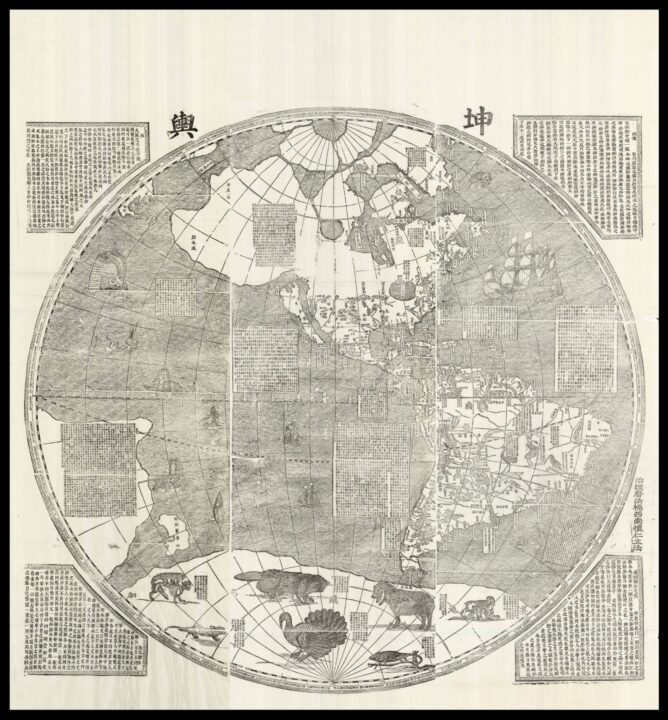 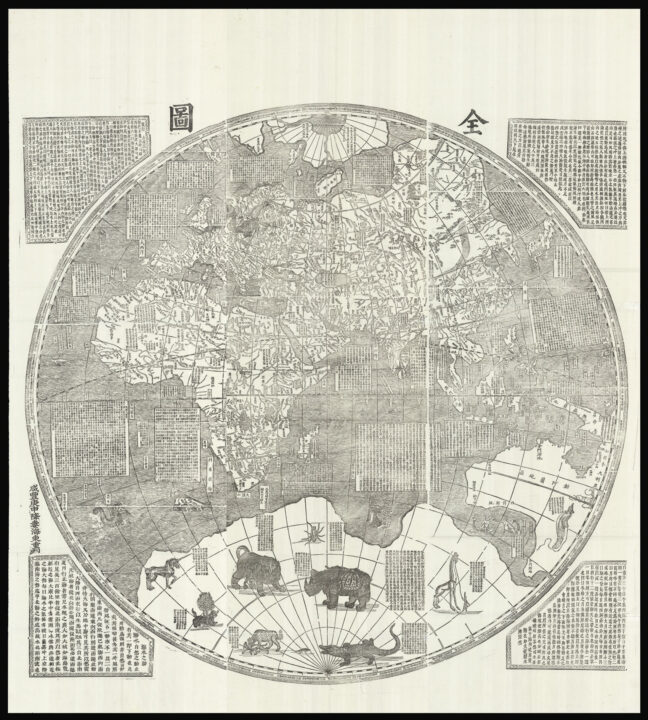 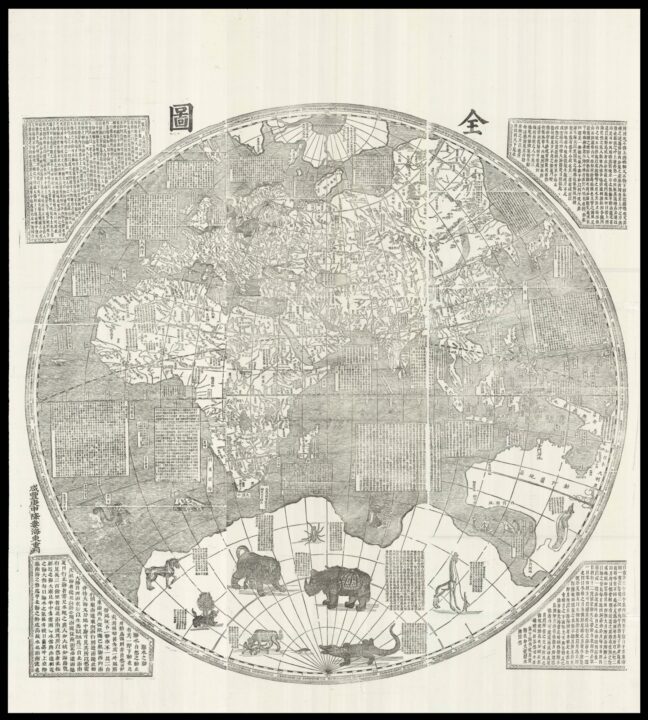 In 1658, with thirty-five new missionaries, Ferdinand Verbiest accompanied Father Martin Martini on his return to China after having secured at Rome the Decree of Alexander VII for the toleration of the Chinese rites. He reached Macao in 1659, and was exercising his ministry in Shen-si when in 1660 he was called to Peking to assist, and eventually to replace, Father Adam Schall in his astronomical labours. At this time Schall was very much in favour with the Shunzhi Emperor and had considerable authority. This began to change in 1661, however, when the Emperor died and four regents took power to run the country until the Emperor’s seven-year-old son who succeeded him became old enough to rule. With Schall’s death in 1666, Verbiest was the only westerner with the astronomical knowledge needed at the Chinese Observatory; he was appointed director in 1669. 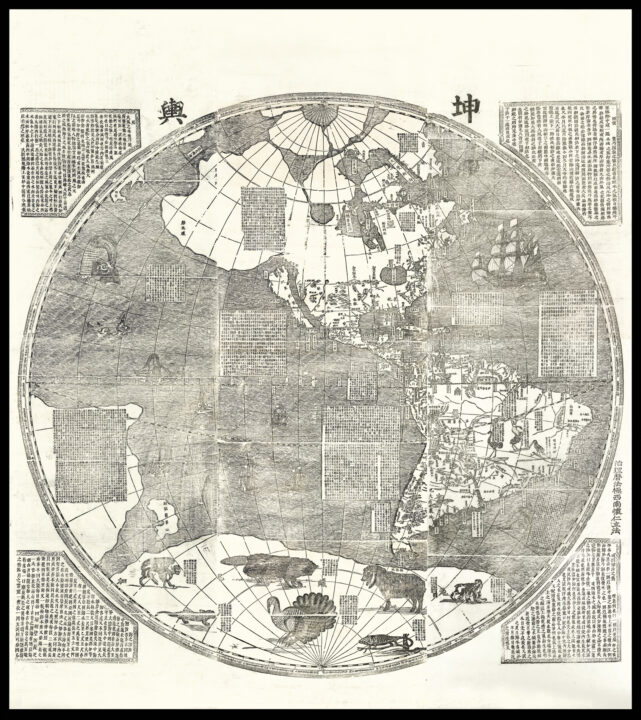