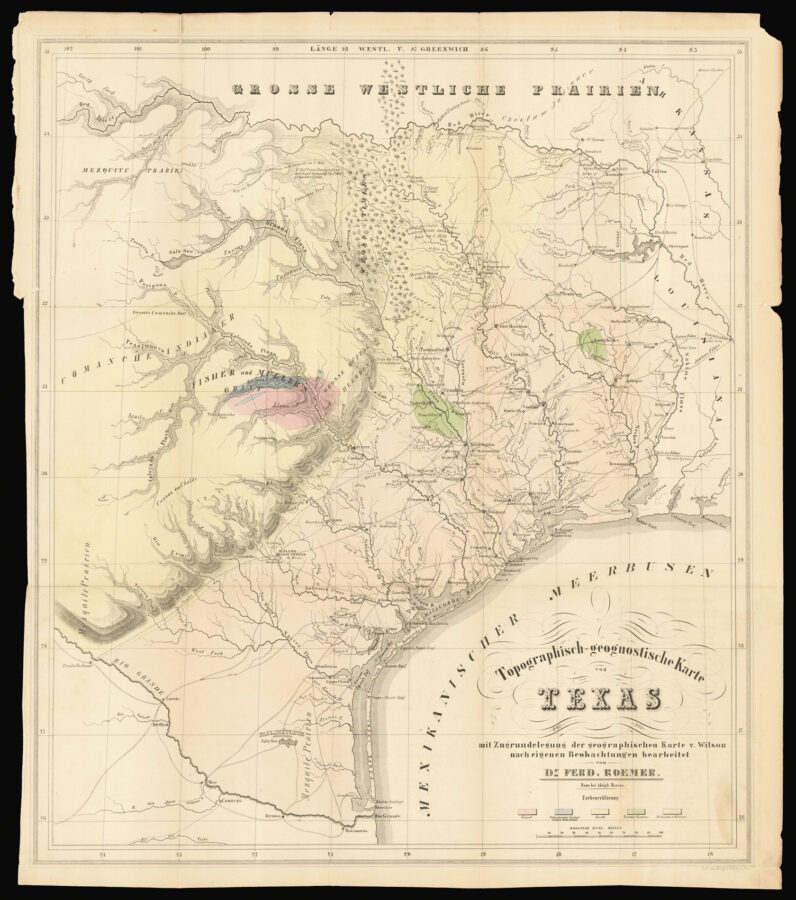 This map is of particular importance: it is the first geological map of Texas, and one of the most accurate from the Republic period. The map shows only the settled portion of the state, east of approximately the 101st meridian. Roemer identifies various geological strata by color, such as granite, alluvial, tertiary, and palaeozoic. This geological data is superimposed on an excellent topographical map that includes a wealth of human detail. He gives an excellent account of the road system, with many towns, settlements, forts, and ferries. Originally from Roemer’s book ​‘Texas: Mit besonderer Rucksicht auf deutsche Auswanderung und die physichen Verhaeltnisse des Landes nach eigener Beobachtung geschildert’.
Ferdinand Roemer (1818–1891), known as ​“the father of Texas geology”, came to Texas at the instigation of Prince Carl of Solms-Braunfels to investigate the mineral resources of Texas and to produce a competent map of the country. Solms-Braunfels was particularly interested, as a large number of German immigrants were currently settling in Texas under his sponsorship. With the financial assistance of Alexander von Humboldt and the Royal Academy of Sciences in Berlin, Roemer arrived in Texas in 1845. During the ensuing year and a half, he explored most of the settled areas of the state.
When he returned to Germany in late 1847, Roemer wrote this account, under the patronage of the Berlin Academy. He confessed that it was impossible to present his scientific findings without including observations on Texas and Texans. Rupert Richardson claimed it was ​“the best account available of the Texas frontier at that time.” J. Frank Dobie states that Roemer ​“saw more and told about it in a livelier and more diverting way than any other brace of travelers between Cabeza de Vaca and Frederick Law Olmstead.” Samuel W. Geiser said that the work ​“is an invaluable source for the social history of that day in Texas.” Among Roemer’s adventures was his participation in Meurbach and Neighbor’s expedition to make their famous treaty with the Comanche Indians, one of the most interesting events in the history of Texas Indian relations.
The most important contribution of Roemer’s work was in the field of science. Donald C. Barton states that ​“much of his geological observation and reasoning is just as good now and always will be as good as when he made them”.