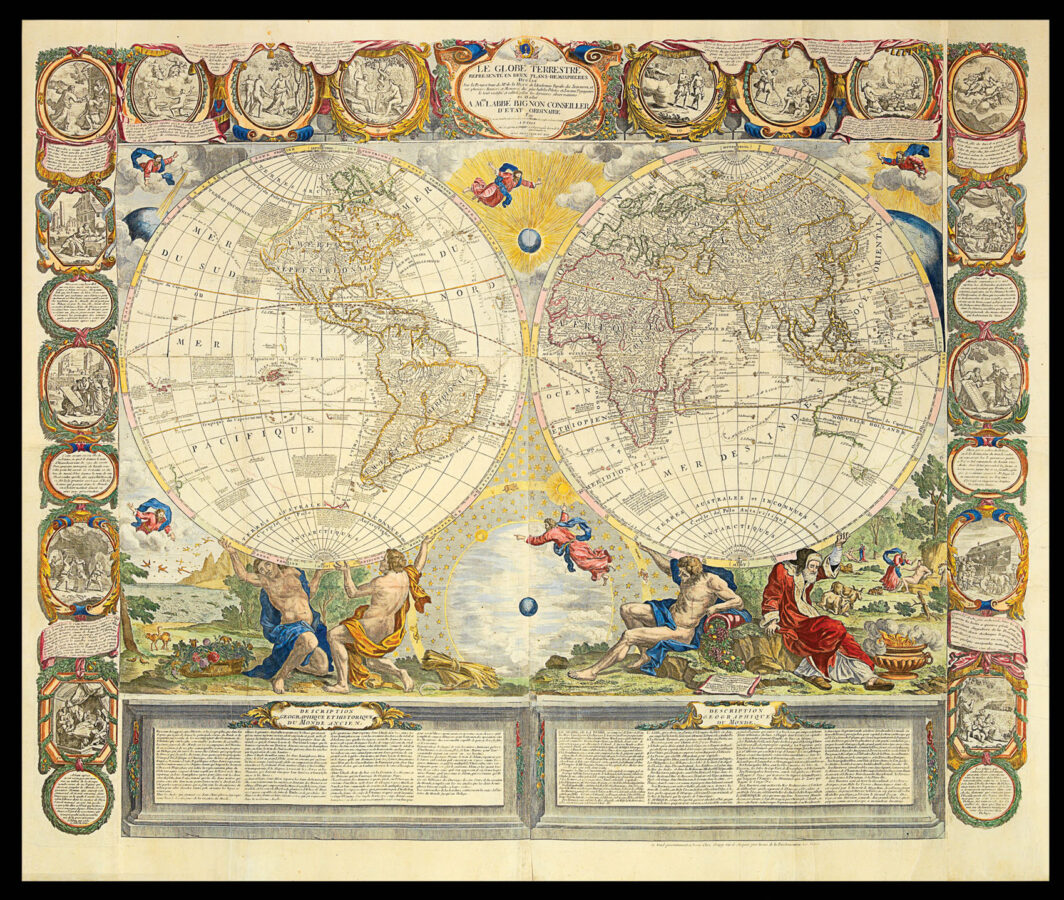 One of the finest large-scale world maps to be produced

This splendid ​‘Globe Terrestre’ by J.B. Nolin, dated 1700, is one of the finest large-scale world maps to be produced and is a fitting bridge between the geographical and artistic skills of the seventeenth century and the century to come. The twin hemispheres and their decorative surround are engraved on four sheets with further strips comprising a broad pictorial border and, at the bottom, architectural columns of text.

The geographical content of the hemispheres is particularly interesting as two areas — Australia and North America — are shown conjecturally in advance of the ​‘most modern’ rendering in De L’Isle’s world map, also produced in 1700. Australia is given a quite new eastern coastline, in provisional shading, linking Papua-New Guinea and Tasmania in one sweep. This feature is to be found in many later eighteenth-century maps and was not to be corrected until the discoveries of Captain Cook in the 1770s. In North America there is to be seen for the first time a great Mer De L’Ouest reaching from just north of California deep into the centre of the Continent. A further channel is conjecturally shown linking the Pacific Ocean all the way through to Hudson’s Bay. A guarded inscription queries whether such a route really exists as only the approach entrances have been navigated. This ficticious channel gained currency in the early 1700s through the publication of Baron De Lahontan’s ​‘Nouveaux Voyages’ in 1703 but rumours of a Mer De L’Ouest had circulated earlier. It appears that a manuscript map prepared by De L’Isle in 1699 was presented to M. Boucherat and thence lent to Nolin who copied it for his own world map a year later. A lawsuit was subsequently brought against Nolin as, according to statements made by De L’Isle’s brother and son-in-law Philippe Buache in 1753, the Mer De L’Ouest was shown on De L’Isle’s 1699 manuscript. Whatever the truth, Nolin did not rely entirely on De L’Isle’s map and he does not follow him in making Japan an extended peninsula of the Terre D’Yeco.

Each of Nolin’s hemispheres is supported by two large mythological figures. In the corners and between the hemispheres are pictures relating to the creation of the world, the heavens, and mankind on earth. The richly decorative borders are composed of sixteen medallion vignettes, each piece depicting in contemporary terms an incident from biblical history. The engraving and design is of the highest quality: as the imprint states, the artist was the painter Bocquet who carried out this work according to Nolin’s conception.