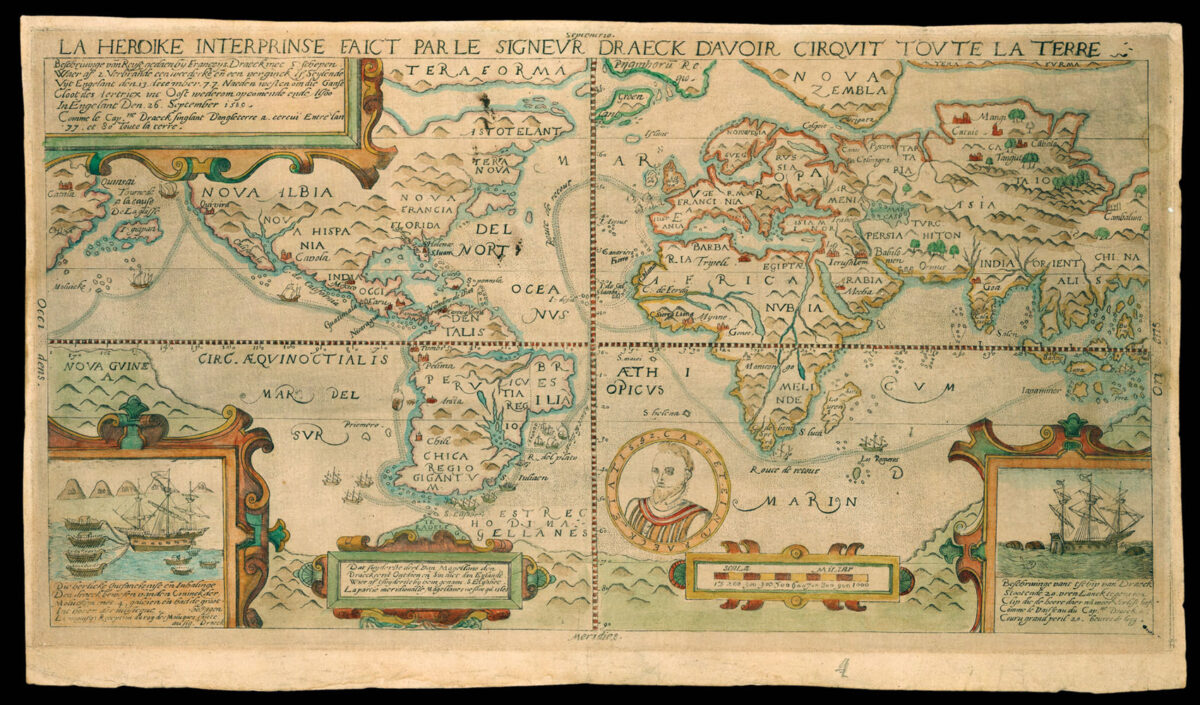 One of the earliest maps to depict Drake’s circumnavigation

This separately published broadside map is one of the earliest to record Drake’s celebrated voyage. The voyage was the first by an Englishman and only the second after Magellan, and as such was of huge significance. It challenged Spain’s hegemony of the New World at the same time that England was confronting her power over Europe. The circumnavigation was also good business, with a return on the original investment of 4,600%. The Queen’s own share, according to John Maynard Keynes, was enough to pay off England’s foreign debt, leaving enough to finance a new venture, The Levant Company.

The map highlights the voyage’s importance with the path of the ships marked by three bold dotted parallel lines. Five ships are shown leaving the English Channel on 13 December 1577 and making their way to the first stop, the Cape Verde Islands. Drake then sailed across the Atlantic to the Río de la Plata (“R. del plato”) then down to Port St Julian (“S. Jiliaen”), where they wintered for two months. The passage through the Straits of Magellan was treacherous: the last of the three small boats was lost, and Drake was separated from the ​‘Elisabeth’, which headed back through the straits and returned home. Drake’s passage though the straits provided evidence that the fabled ​‘Terra Australis’ did not come as far north as had been previously supposed. His solitary ship is depicted sailing up the west coast of the Americas, where he plundered several Spanish outposts. Drake also explored the coast of upper California, naming it Nova Albion (as shown on the map).

He is believed to have sailed as far as Vancouver Island, most probably in a vain search for the Northwest Passage. The map then shows him crossing the Pacific and heading for the Philippines. His arrival at the island of Ternate in the East Indies is depicted in the lower left cartouche, where he gained a valuable cargo of cloves from the island’s ruler. Drake’s voyage almost came to an end when the Golden Hind hit a reef near Celebes after leaving Ternate, depicted in a vignette to the lower right. Fortunately, he managed to break free and continue his journey, sailing across the Indian Ocean, around the Cape of Good Hope and arriving at Plymouth on 26 September 1580: a journey of almost three years.

The present map was most likely derived from the ​‘Whitehall map’, which Drake had prepared for Elizabeth in 1581. The map was described by Purchas in his ​‘Voyages’ as hanging in the ​“Gallerie at White Hall, neere the Privie Chamber”. It was destroyed by a fire in 1698. There are three known extant derivatives of the original Whitehall map. The first is the so called Drake/​Mellon map, a manuscript copy, bearing the exact same title but with the addition of Drake’s voyage to the Caribbean in 1585–1586, which is believed to be the most faithful representation of the original and held by the Yale Centre for British Art. The second,“One of the greatest cartographic treasures of the Elizabethan era”, is by Nicolas van Sype (Kraus), and was published at some point between 1580 and 1584. This is probably the earliest extant map to show Drake’s circumnavigation. Sype’s map bears the title ​‘La Herdike Enterprinse aict par le sigeur Draeck’ and includes a cameo of Drake, giving his age as 42, and the line ​“Carte veuee et corige par le dict siegneur drack” (map seen and corrected by the aforesaid Sir Drake). Was this line a clever piece of marketing by van Sype? Or did he actually seek Drake’s approval? We will never know. The cameo, if we take the accepted date of Drake’s birth as 1540/41, does provide us with an approximate date of 1582/3 or later for the map.

The present map is an example of the third derivative, which has been extensively redrawn in comparison with the van Sype and Mellon maps: the cartographer’s name has been removed, as has the description of Drake’s landing in California, which has been replaced with a new northern Arctic continent above Canada (“Terae Orma”), Greenland has been extensively revised, and Nova Zemlya has been added. Drake’s portrait appears in a circle, rather than an oval. In van Sype’s original, Elizabeth I’s coat-of-arms appeared on Tierra del Fuego but is absent here, and the land masses are filled with stylised mountains and cities.

There are two variants of this third derivative, each known only by a single copy. The earlier issue is held in the Huntington Library and has fewer toponyms. This is the second issue, the only other known copy of which is held in the New York Public Library. This is dated by Wagner to sometime after 1587, because the map names California, one of the first European maps to do so. Wagner suggests that it was modelled on Ortelius’s world map of 1586, which would also account for the changes made in the Arctic Circle.