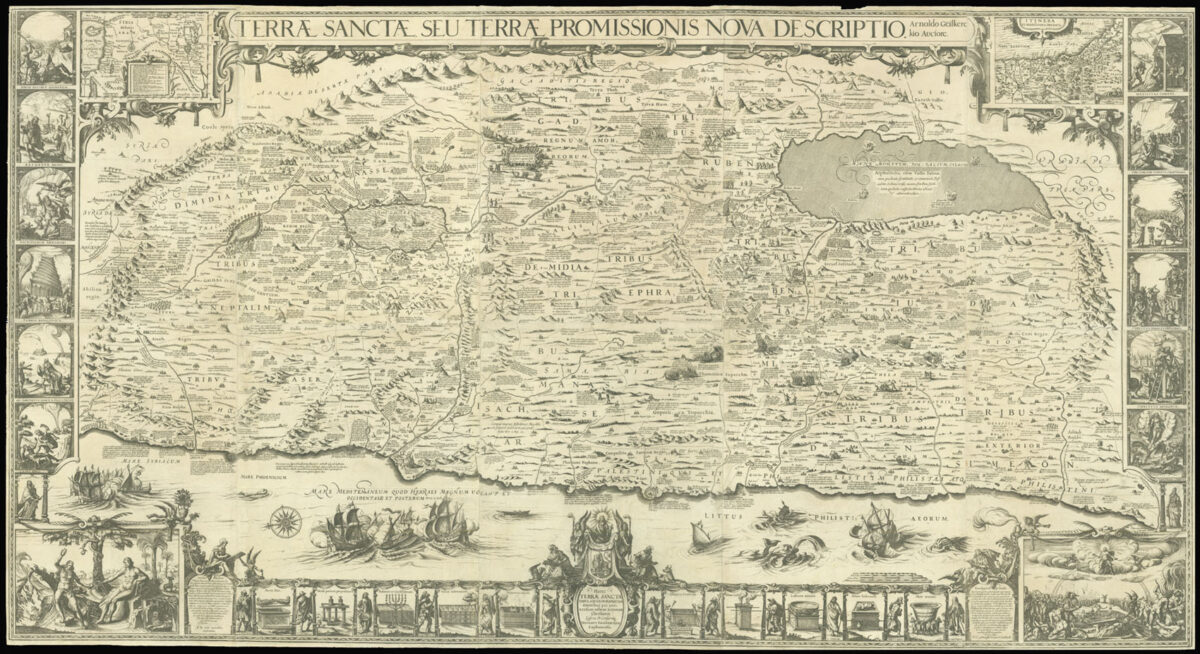 By GEELKERCKEN, Arnold and Nicolaes, 1670

Large wall map of the Holy Land orientated with east at the top. The map is replete with quotes and depictions from the Old and New Testament, with many of the illustrations being accompanied by a number, most probably for a, no longer extent, explanatory key. To the left and right of the title are two maps showing respectively the wanderings of Abraham from Mesopotamia to Canaan and the journey of the Israelites from Egypt to the Promised Land; the borders on the left and right of the map each show five scenes from the Old and New Testaments respectively, the lower border displays a dedication to Christian Lubens, and addresses to the reader by Nicolaas Geelkerken in Latin and Dutch. There are two large engravings showing Adam and Eve and the last judgement, and a frieze of ten engravings with objects from the Temple, interspersed with figures of apostles. The Dutch text to the bottom right of the map mentions Arnold Geelkercken’s travels in the Holy Land, the debt owed by the map to those ​“learned and experienced men” — most notably Philpp Clüver and Petrus Bertius, and also to Chritsian van Adrichem’s work ​‘Theatrum Terrae Sanctae et Biblicarum Historiarum’ of 1590.

The map was the work of Nicolaes van Geelkercken (c.1585–1656) and his brother Arnold van Ssherpenseel (also known as Arnold Arnoldi — and upon the present map as Arnold Geelkercken) (c.1570–1602). Little is known of either man’s early life; we know from text upon the present map that Arnold travelled to the Holy Land at some point in the early 1590s; he next appears in Venice in the mid 1590s working as an engraver of maps and scientific instruments for Giovanni Antonio Magini. In about 1600 Arnold was joined in Italy by his brother Nicolaes. It is during this time that the brothers began work on the present map. Unfortunately, the work remained unfinished upon the death of Arnold in 1602. Following his brother’s passing Nicolaes left Italy and settled in Amsterdam in 1603; in 1612 he set up shop as an engraver and publisher in Leiden, briefly moving back to Amsterdam in 1613–1616, before eventually settling permanently in Leiden in 1617. It is whilst in Leiden, with the help of Philpp Clüver and Petrus Bertius, that he turned his attention to the map of the Holy Land, with the finished work being published in 1621.

We are only able to trace three institutional examples of the map — a first edition held in the Rijksmuseum dated 1621 and bearing the imprint of Nicolaes Geelkercken; an example in the Bibliotheque Nationale de France dated 1631 and bearing Janssonius’s imprint; and a third — similar to the present map — undated but bearing the imprint of Federick De Wit also housed at the BNF in Paris.