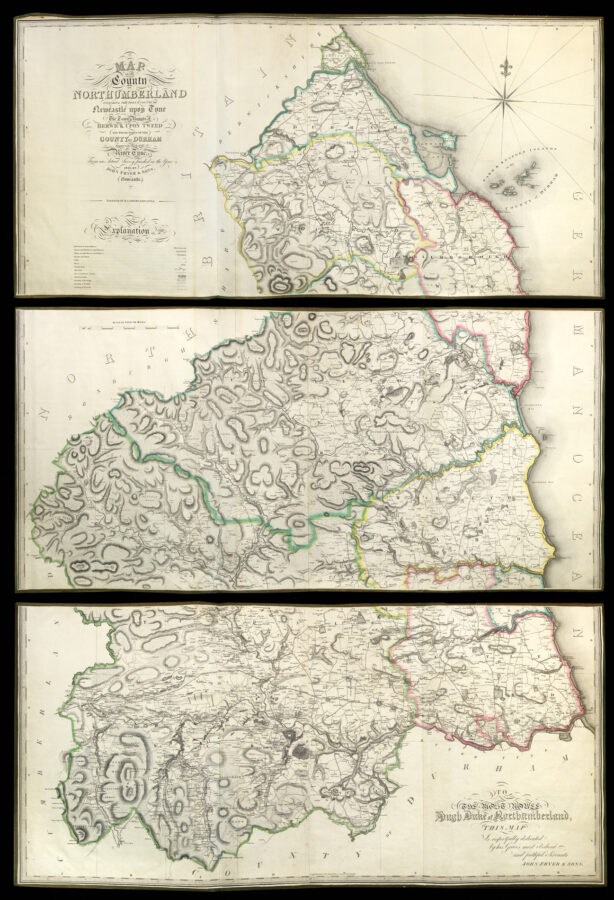 An important early detailed survey of Northumberland, and a fine example of the contemporary demand for large-scale regional maps. The Royal Society of Art began to offer prizes for maps on a scale of one inch to the mile in 1762, which initiated a flurry of large-scale county surveys. This map, on the same scale, was produced by John Fryer (1745/46–1825) and his son William (1788–1864), cartographers and land surveyors based in northeast England. The Fryers’ surveying experience allowed them to construct highly accurate maps, including plans of Newcastle and the River Tyne. They used their direct contact with the terrain as a selling point: the title proclaims that it is made ​“From an actual survey”. Both father and son also held the position of receiver-general for Crown revenues in northern counties, which means the map may have been useful to them as an administrative tool as well as an expression of cartographic skill.

The map is dedicated to Lieutenant-General Hugh Percy, 3rd Duke of Northumberland, who would later serve as Lord Lieutenant of Ireland under Wellington. The Duke’s name and order for five copies appears first in the list of subscribers in the index booklet with the Duke of Portland. It was common practice for maps such as these to be sponsored by subscriptions from local worthies, who might also provide feedback as to the map’s accuracy. A map of Dorset, submitted by Isaac Taylor to the Royal Society, did not win a prize after it was deemed inaccurate by the local gentry.

Although the Fryers’ work was not the first large scale map of Northumberland, it was the first to show its longitudinal position correctly. It is designed for clarity of use. The ​‘Explanation’ underneath the title cartouche provided a guide to the cartographical symbols used, and an accompanying booklet allowed the owner to look up the map square in which a particular town appeared. Of particular interest are the large shaded areas of the map, indicating the large amount of land which remained unenclosed even in the nineteenth century and Hadrian’s Wall, marked as ​‘Roman Wall’, correctly showing it extending to Wallsend rather than terminating at Newcastle. The town and environs of Alnwick are given prominence as the seat of the map’s patron, the Duke of Northumberland.