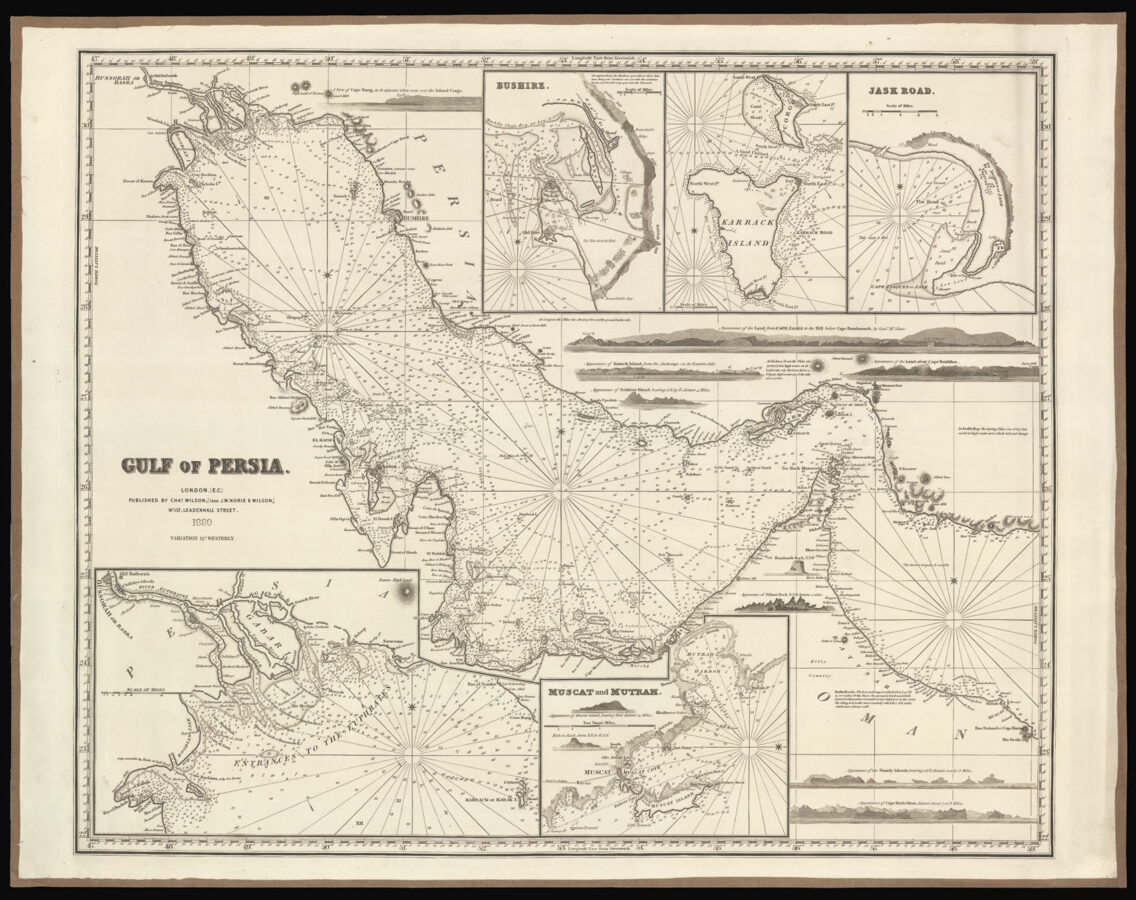 Highly detailed and rare chart of the Arabian Gulf.

The chart is based on Commander Barnes Brucks’ seminal chart of the Gulf published in 1832. It was the first chart of the Arabian Gulf ever printed to show all the settlements today forming the United Arab Emirates. Drawn with an astounding degree of detail, the Brucks chart, also includes the first occurrence of many other local place names in print, reaching from Ash Sha’m (“Shaum”) in the north to Khor Fakkan (“Khorefacawn”) and Fujairah (“Fedgeerah”) in the east, and westwards to Ras al-Khaimah (“Rasel Khyma”), Umm al-Quwain (“Amulgawein”), Ajman (“Aymaun”), Sharjah (“Sharja”), Dubai (“Debai”) and Abu Dhabi (“Abothubbee”), then stretching to Qatar (with correct coastline, while Doha still labeled under its old name ​“Al-Bidda”), Bahrein, and on to the mouth of the Shatt al-Arab.

John William Norie first published the chart on January 9th 1833, a year after James Horsburgh had published Brucks’ survey. Norie also adds three inset charts of Bushehr (“Busheer”), Kharg Island (“Karak”), Muscat, Bandar-e-Jask (“Jask Road”), and the mouth of the Euphrates, together with numerous coastal profiles. Norie would go on to publish the chart with almost no revision for the rest of the nineteenth century.

The present chart, dated 1880, bears the name of Charles Wilson junior, who took over the running of the business when his father, Charles Wilson, retired in 1878.

All working sea charts from this era are rare, due to their high mortality rate, and the present chart is no exception. We are unable to trace an institutional example of the this edition. The University of Cambridge Library hold an example of the 1833 chart. We are also unable to find any example appearing at auction in the last 40 years.