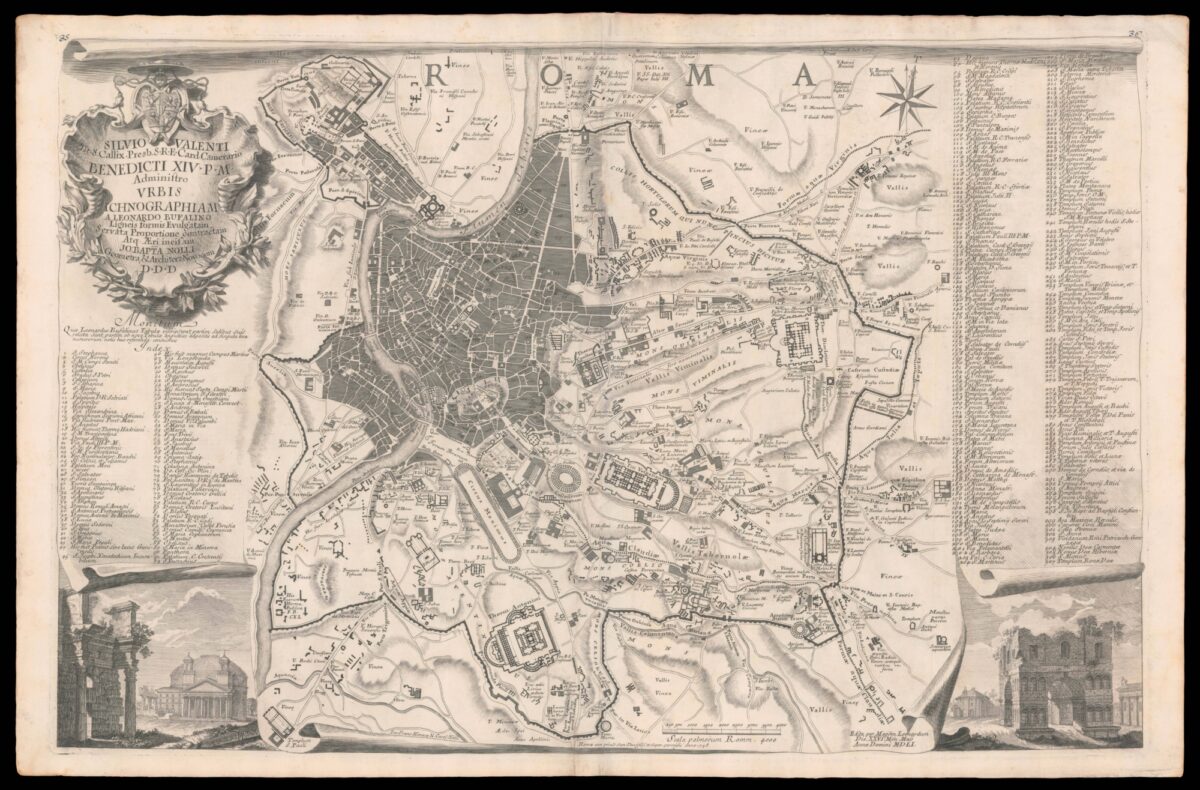 By NOLLI, Giovanni Battista, [with] Francesco MONACO [and] Carlo NOLLI [after BUFALINI, Leonardo], 1748

Nolli’s plan of ancient Rome was issued in the same series as his monumental 12-sheet map of the city. This was the final map in the series, and it allowed his audience to picture Rome’s development throughout the ages, all the while satisfying his Neoclassical audience’s fascination with antiquity.

This plan is a reduced version of Leonardo Bufalini’s 1551 woodcut plan of Ancient Rome, the first printed map of the city. Bufalini’s map is the only plan of the city that Nolli pays tribute to in his oeuvre, a sign of the map’s lasting importance and influence. Nolli follows Bufalini by creating an ichnographic plan of the city, thereby showing the architectural floor plans of various ancient Roman monuments. He continues this practice in his large-scale plan, though there he provides floor plans for the Rome’s churches as well as for its ruins.

The ornamentation surrounding the map was engraved by Francesco Monaco. He creates a trompe l’oeil scroll upon which the map is displayed. The lower right and left corners show views of ancient monuments, such as the pantheon.

Giovanni Battista Nolli (Como 1701 — Rome 1756) was born into a family of surveyors and builders active in Lombardy. He started his career at the Land Registry in Milan, newly set up by Charles VI of Austria. There, he was introduced to the latest methods of surveying and mapping, which included the use of the plain table, an instrument that provided for more accurate and efficient drawings, compared to the standard systems. Nolli moved to Rome in 1736, where he soon became part of a circle of antiquarians and intellectuals who were planning a new and most exact map of the old and new city. Nolli’s experience in Milan proved extremely useful, and he quickly took the lead on the project, which was set off by Cardinal Guadagni granting him with a permit to enter churches and enclosed monasteries in order to take the most accurate measurements. The resulting plan was easily the most precise ever made of the city, and it naturally became the basis for most the subsequent mapping of the city.