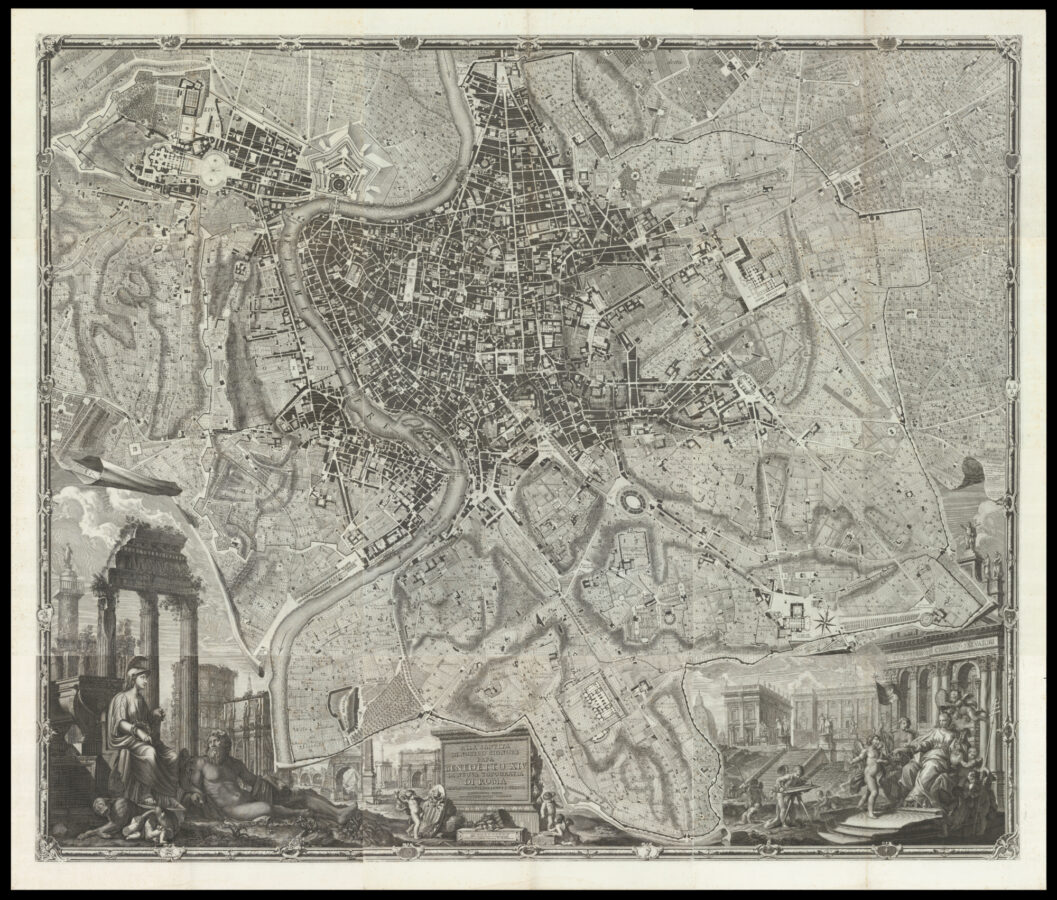 The finest of the eighteenth century plans of Rome and the first plan of the city based upon geodetic principles.

With Rocque’s plan of London and Bretez’ plan of Paris, Nolli’s plan ranks as one of the greatest eighteenth century plans of any European city. Rome essentially appears in its Renaissance form, with large areas within the ancient walls still occupied by villas with extensive fields, orchards, and gardens. The Colosseum, for example, still stands in virtually open country. Many important ancient sites, such as the Circus Maximus and the Forum, are shown in an unearthed state. The lower sheets are almost entirely taken up by lavish, finely engraved ornamentation by Stefano Pozzi. In the lower left corner is a montage of classical landmarks, including the Colosseum, Arch of Constantine, the Forum and Trajan’s Column, before which are allegorical figures including Romulus and Remus in the form of broken ancient statuary. The lower right corner contains an allegorical representation of the Church seated before Michelangelo’s assemblage of buildings on the Capitoline Hill.

Giovanni Battista Nolli (Como 1701 — Rome 1756) was born into a family of surveyors and builders active in Lombardy. He started his career at the Land Registry in Milan, newly set up by Charles VI of Austria. There, he was introduced to the latest methods of surveying and mapping, which included the use of the plain table, an instrument that provided for more accurate and efficient drawings, compared to the standard systems. Nolli moved to Rome in 1736, where he soon became part of a circle of antiquarians and intellectuals who were planning a new and most exact map of the old and new city. Nolli’s experience in Milan proved extremely useful, and he quickly took the lead on the project, which was set off by Cardinal Guadagni granting him with a permit to enter churches and enclosed monasteries in order to take the most accurate measurements. The plan was sponsored by the Milanese banker Belloni, friend of Nolli, and it took several years’ work and a large team of architects to complete. The result was deemed a masterpiece, though commercially it did not translate into quick sales – of 1826 printed examples, 162 had been booked. By the end of the eighteenth century, however, the plan had already become a rare and precious edition, its accuracy and precision making it the basis for most of the subsequent mapping of the city.