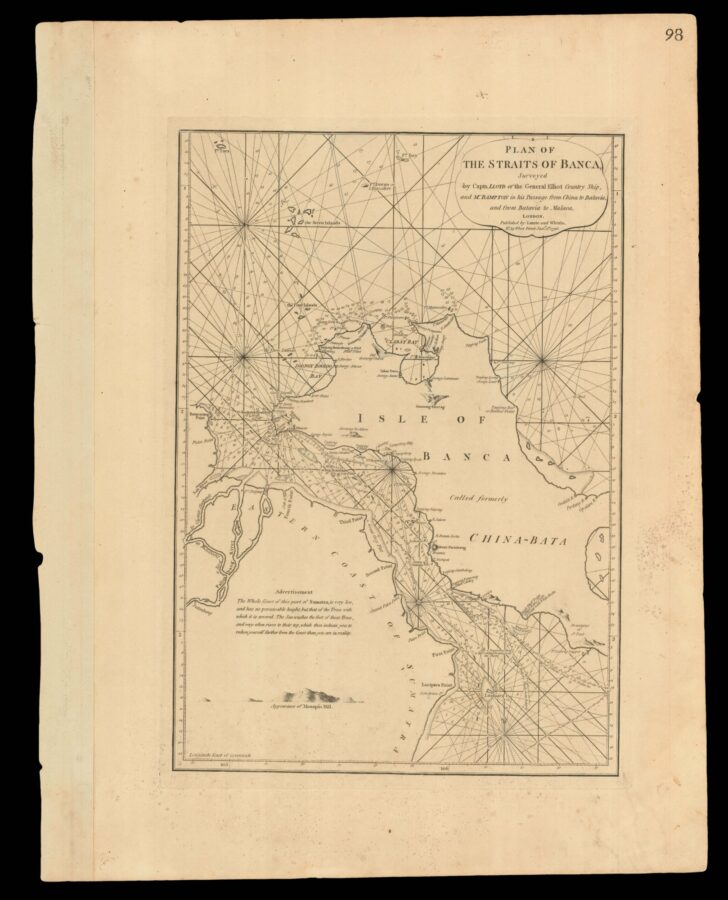 Plan of the Straits of Banca surveyed by Captn. Lloyd of the General Elliot Country Ship, and M.r Bampton in his Passage from China to Batavia, and from Batavia to Malaca.

Navigational chart of the waters around the Island of Bangka. Off the east coast of Sumatra, the island had long been a source of tin. The chart includes a plethora of depth soundings based on the surveys of the ​‘General Elliot’, described as a ​“Country Ship”, a term reserved by the British authorities in India to refer to local vessels operating between India and other Asian countries, as distinct from the trade routes between Asia and Europe. British vessels, not in the service of the East India Company, plying these waters, were therefore known as English country traders.

The ​“Advertisement” on the map warns that ​“the Whole Coast of this part of Sumatra, is very low, and has no perceivable height, but that of the Trees with which it is covered. The Sea washes the foot of those Trees, and very often rises to their top, which then induces you to reckon yourself farther from the Coast than you are in reality”.

The chart is from an early edition of Laurie & Whittle’s rare ​‘East India Pilot’, and one of the first charts published after their purchase of Robert’s Sayer’s business. Laurie & Whittle’s ​‘East India Pilot’ was published as a practical guide to navigators aboard ships of the Royal Navy and East Indiamen, and often taken to sea, and this chart appears to be no exception, as it is gently spotted. All variants of Laurie and Whittle’s ​‘Oriental’ pilots of eastern waters are scarce, and were published under several titles, each with a different complement of charts. Variants include: ​‘The Country Trade East-India Pilot, for the Navigation of the East-Indies and Oriental Seas, within the limits of the East-India Company’, ​‘The Complete East-India Pilot, or Oriental Navigator’, ​‘The East-India Pilot, or Oriental Navigator’, and ​‘The Oriental Pilot; Or, East-India Directory’ focusing on the most important charts used for the journey. 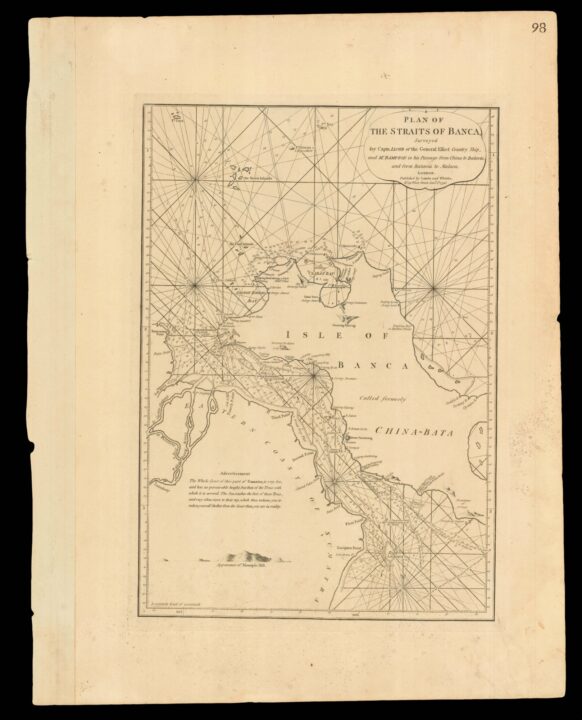