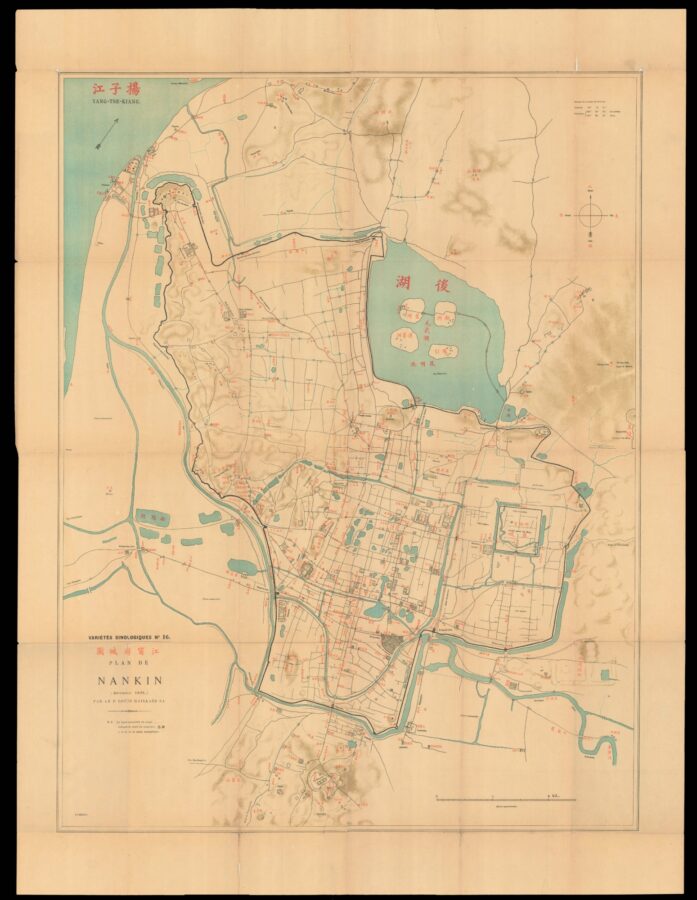 A map of Nankin [Nanjing] published in December 1898, compiled by Père Louis Gaillard (1850–1900). The names of geographical details and locations are printed in Chinese and French, with colours red and black respectively. Nanjing was the capital city in during latter half of the Ming dynasty until the mid seventeenth century, the imperial palace is depicted as a square and titled Huang cheng 皇城 (Emperor’s city) to the southeast of the lake Hou hu 後湖 ​“Luc Heou-hu”. Near the top right of the palace, next to a small lake Qian hu 前湖 (Former lake) are two notable sites in Nanjing: Xiegong dun 謝公墩 (Duke Xie’s memorial) and Banshan si 半山寺 (Banshan temple). They have been controversial due to their connotations of renowned historical figures. Xiegong 謝公 is the honorific title of Xie An 謝安 (320–385), a Jin Dynasty (265–420) statesman who, despite his lack of military ability, led Jin through a major series of attacks by Former Qin (351–394). Banshan temple is known to be the abode of Wang Anshi 王安石 (1021–1086), a Chinese economist, poet and prominent political reformist during the Northern Song dynasty (960‑1127).

The map is included in Nankin d’alors et d’aujourd’hui, no.16 of the ​“Variétés sinologiques”, a French-language sinological book series published by the leader of the French Jesuits Henri Havret (1848–1902). The series has 66 volumes, produced in Shanghai between 1892 and 1938 by the Imprimerie de la mission catholique de l’orphelinat de T’ou-Sè-Wè (printing house of the T’ou-Sè-Wè orphanage). T’ou-Sè-Wè [Tushanwan] orphanage, also a vocational school and a printing house, was built in 1864 by the French Jesuits in Shanghai Xujiahui district, and closed in 1960, lasting nearly a century. The production of the series saw through the first Sino-Japanese War (1894–1895) and halted at the beginning of the second (1937–1945). The series resumed under the title ​“New Series” (N.S.) starting from vol. 67 (1982) under the auspices of the Ricci Institute.

[We strictly limit ourselves to the researches of archeology, art and history, protesting in advance that we adhere wholeheartedly to the purest teaching of the Church.]

Scale: 1:14500
Rare. We are only able to trace two institutional examples: the National Library of Australia, and the Stanford University Libraries.