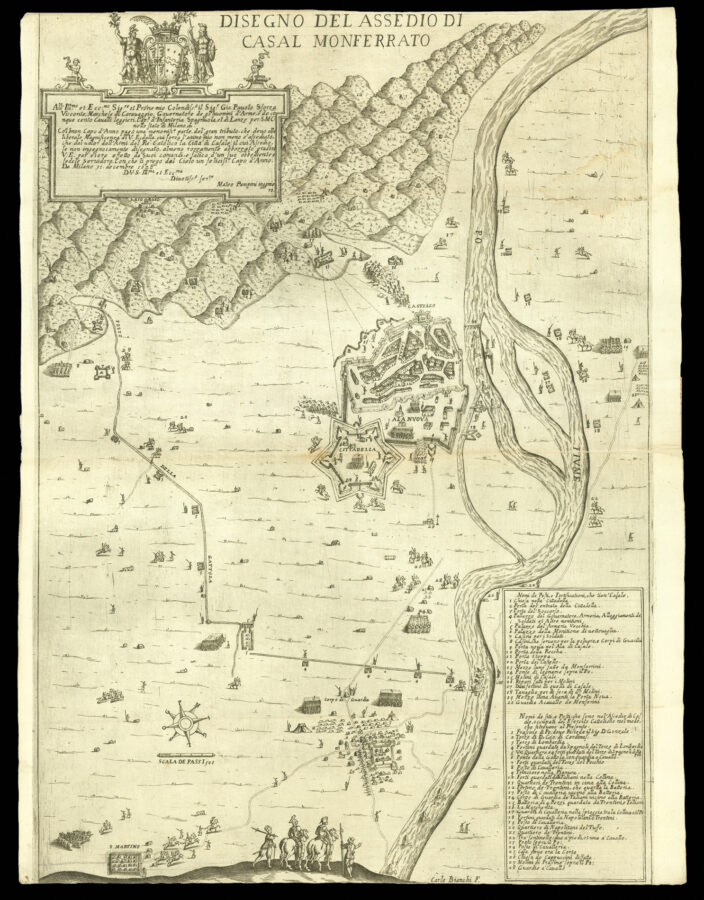 Casale Monferrato was a strategically important fortress town in Piedmont, capital of the Monferrato region. The central citadel — the castello — was one of the strongest and most impressive fortifications of the region.

This map depicts the siege of Casale Monferrato by the forces of his Catholic Majesty, the king of Spain, in 1628. The siege formed part of the War of the Mantuan Succession, in which Spain, France and the Holy Roman Empire sought to install their own candidate as Duke of Mantua after the early death of the reigning duke Vincenzo II in 1627. France favoured the rightful claimant, Charles, Duke of Nevers; however, Spain, and allies, favoured a rival claimant, Charles Emmanuel, Duke of Savoy. When Nevers arrived in Mantua to claim the title, Charles Emmanuel, with the support of the Spanish and Habsburgs put an army in the field, and in 1628 laid siege to Casale, the besiegers commanded by the Genoese Ambrogio Spinola, commander of Spanish forces in the region. The siege was unsuccessful; having successfully dealt with the Huguenot revolt in La Rochelle, the French were able to turn their attention to Mantua, sending an army that relieved Casale on 18th March, 1629.