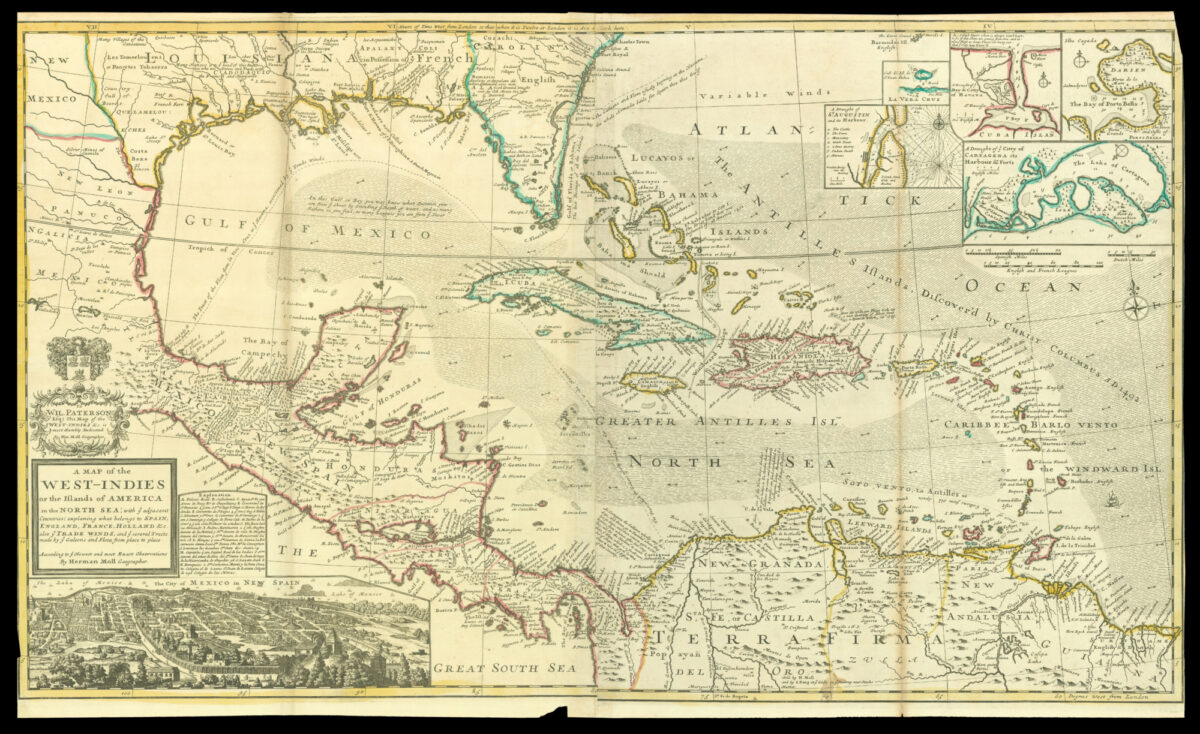 Moll’s map of the West Indies

A Map of the West-Indies A Map of the West-Indies or the Islands of America in the North Sea; with ye adjacent Countries; explaining what belongs to Spain, England, France and Holland &c. also ye Trade Winds, and ye several Tracts made by ye Galeons and Flota from place to place. According to ye newest and most exact observations, by Hermann Moll, Geographer.

The early eighteenth century saw a resurgence in piracy in the Caribbean as the War of the Spanish Succession drew to a close, leaving the sailors and privateers who had fought in the West Indies free to concentrate on the growing cross-Atlantic trade. British privateers were at the forefront, especially after Britain won the asiento, the contract to supply slaves to Spanish colonies in the Americas. The slave trade created a cross-Atlantic triangle: goods were carried from Europe to Africa, slaves from Africa to the Americas, and cash crops like sugar from the Americas to Europe. Furthermore, the Spanish bullion trade continued to provide rich pickings for pirates.

The detailed information on Spanish treasure routes, local geography and sailing conditions was almost certainly contributed by William Dampier and Woodes Rogers, two English buccaneers who were associates of Moll and part of the same intellectual circle, which also included Daniel Defoe and John Locke. William Dampier was the first Englishman to explore Australia, and the first to circumnavigate the world three times.

Woodes Rogers hired Dampier as chief pilot for the ship he captained during a privateering expedition in 1707. On another voyage, he was the captain of the ship which rescued the marooned Alexander Selkirk. Like Dampier, he raided ports in South America and won fame after capturing two Spanish treasure ships and bringing them back to Britain.

In a time where the national boundaries were continually redrawn, Moll’s map was ​“a rallying cry” (Dym and Offen). The labels and colour coding of the map showed that the Caribbean was no longer the almost exclusive preserve of Spain, but was divided between Britain, France and Holland as well. Although Spain retained important mainland colonial possessions (hence the continued flow of Spanish treasure fleets) an ineffective monarchy and continual warfare had severely weakened its hold on the Caribbean and Central America.

To demonstrate the fallibility of the Spanish and the maritime power of the British, Moll made his map a ​“buccaneer’s manual” (Dym and Offen). It follows the route of the Spanish treasure fleets from their entrada into the Caribbean to their exit through the Florida Strait. Vessels would come between Granada and Trinidad from Spain, and stop at Cartagena to reprovision. They would then continue to Cuba, and use the Gulf Stream current to get to Veracruz, where they were loaded with bullion. From Veracruz, they would most often travel through the Florida Strait between the mainland and the Bahamas, before moving out to the Atlantic by St Augustine, and then returning to Spain.

By showing the courses taken by the fleets in such detail, Moll was essentially providing a how-to guide for aspiring pirates. The map includes detailed notation of maritime features and trade winds. The Florida Strait is marked ​“The best Passage of all the Islands”: a coded message that here lay the best pickings. The carefully chosen inset maps include the bay of Havana, St Augustine, the city of Cartagena, Vera Cruz, and the bay of Porto Bello on the Isthmus of Darien (now the Isthmus of Panama). These were all stopping points for Spanish bullion fleets, and therefore of great interest to privateers. Moll takes care to highlight the defensive features in each port.

In the lower left corner is a birds-eye view of Mexico City, incorporating new colonial landmarks like the Palacio Real and the cathedral. The original view and key are copied from a 1628 map by Juan Gomez de Trasmonte, created for an unpublished atlas by Johannes Vingboons. This was the first map of Mexico City to update the one made by Hernan Cortez’s expedition.

The map is dedicated to William Paterson: one of the founders of the Bank of England, an advocate of the Darien Scheme and, like Moll, a stockholder in the ill-fated South Sea Company. The dedication reflects Moll’s lifelong interest in the area, both personal and political.