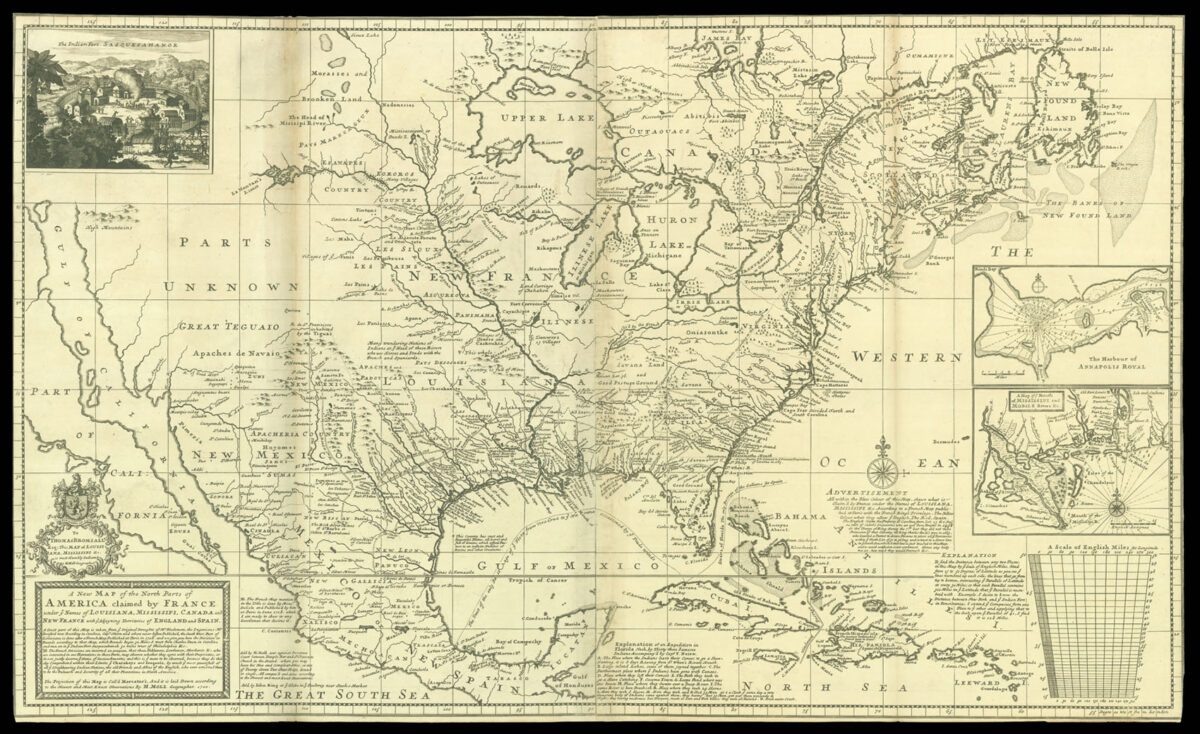 A New Map of the North Parts of America claimed by France under ye Names of Louisiana, Mississipi, Canada and New France with ye Adjoyning Territories of England and Spain

An emphatic statement in the cartographic wrangling between Britain and France over America, Hermann Moll’s map of North America firmly rebuts the claims made by Guillaume de L’Isle in his 1718 map of the Mississippi Valley, which had ​“significantly reduced the western boundaries of the British colonies along the east coast, thereby adding territory claimed by England to French Louisiana” (Degrees of Latitude). Although Moll borrows elements from de L’Isle, he enlarges the map as a whole and makes radical changes to the extent of French claims in America, challenging the claim to the Valley and to the territory of Ohio. Moll calls to arms any English property owners in Carolina, drawing their attention to the ​‘Incroachments’ of the French map on their ​‘Properties’ and on the land of their Indian allies.

The map shows the area east of the Mississippi as English, and challenges French claims in the east by returning part of Florida to the control of Spain. An inscription acknowledges the debt to de L’Isle for the outline of southwest Louisiana, but does not pronounce on the competing claims to the state or on the British claim to Carolina. As noted by Reinhartz, an important feature is Moll’s coastal geography, depicting barrier islands and the mouths of various rivers draining into the Gulf of Mexico. He also makes some interesting observations on local wild life, including the ​“Country full of Beeves” and the Spanish cattle which would eventually become the Texas longhorns, and notes the positions and allegiances of Native American nations.

Moll used de L’Isle’s map and a manuscript map in the Public Record Office as sources, which provided the detail of both his cartographical and cultural data. He made four large maps of North America, establishing himself as the leading English mapmaker in the early eighteenth century.