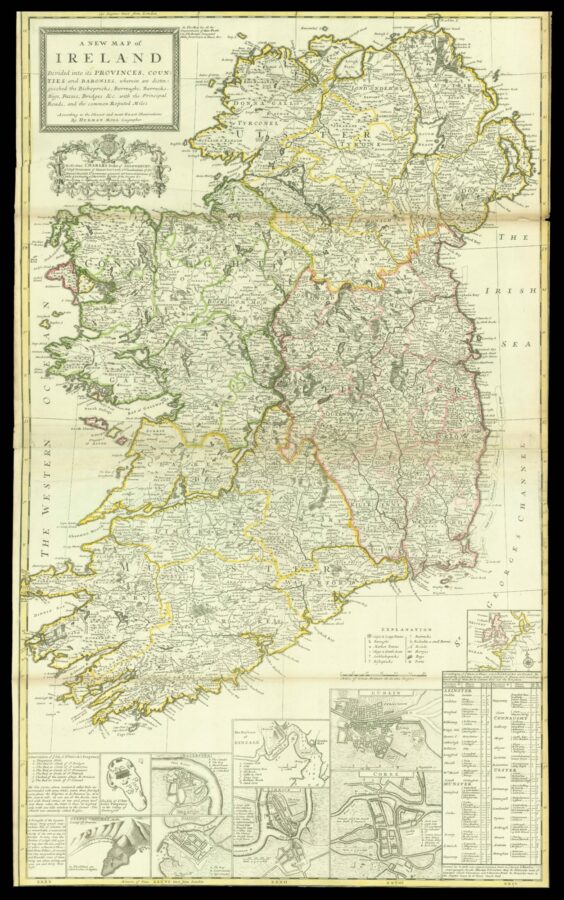 A New Map of Ireland Divided into its Provinces, Counties, and Baronies, wherein are Distinguished the Bishopricks, Borroughs, Barracks, Bogs, Passes, Bridges, &c., with the Principal Roads, and Common Reputed Miles.

An elegant and detailed map of Ireland, showing its division into four provinces and thereafter into countries. It is supplemented by five plans of important cities: Dublin, Cork, Limerick, Waterford and Galway. Moll also includes views of notable places in Ireland: Kinsale Harbour, where Charles II was declared king after his father’s execution, and where James II fled England after the Glorious Revolution; the Giant’s Causeway, basalt columns supposedly built by warring giants; and the Isle of Saint Patrick’s Purgatory, a pilgrimage site in County Donegal where Jesus supposedly showed Patrick an entrance to Purgatory. Finally, there is a table at the lower right listing the number of British soldiers garrisoned in each Irish town to keep the population under control, surmounted by a small plan of western Europe.

Relations between Britain and Ireland were strained at the time. Ireland had been subdued by the English over the sixteenth and seventeenth century, culminating in the harsh Penal Laws enacted against Catholics during the Interregnum, disenfranchising them and dissolving the Irish parliament. Although the parliament was restored with the restoration of the monarchy, Catholics were still not allowed to vote. As they comprised the vast majority of the population, Irish politics was dominated by Anglo-Irish outsiders, causing deep resentment.

The map is dedicated to Charles Talbot, Duke of Shrewsbury, with an elaborate cartouche surmounted by his arms. Shrewsbury served as Lord Lieutenant of Ireland between 1710 and 1714, was recalled that year to court and appointed Lord High Treasurer by Queen Anne on her deathbed.