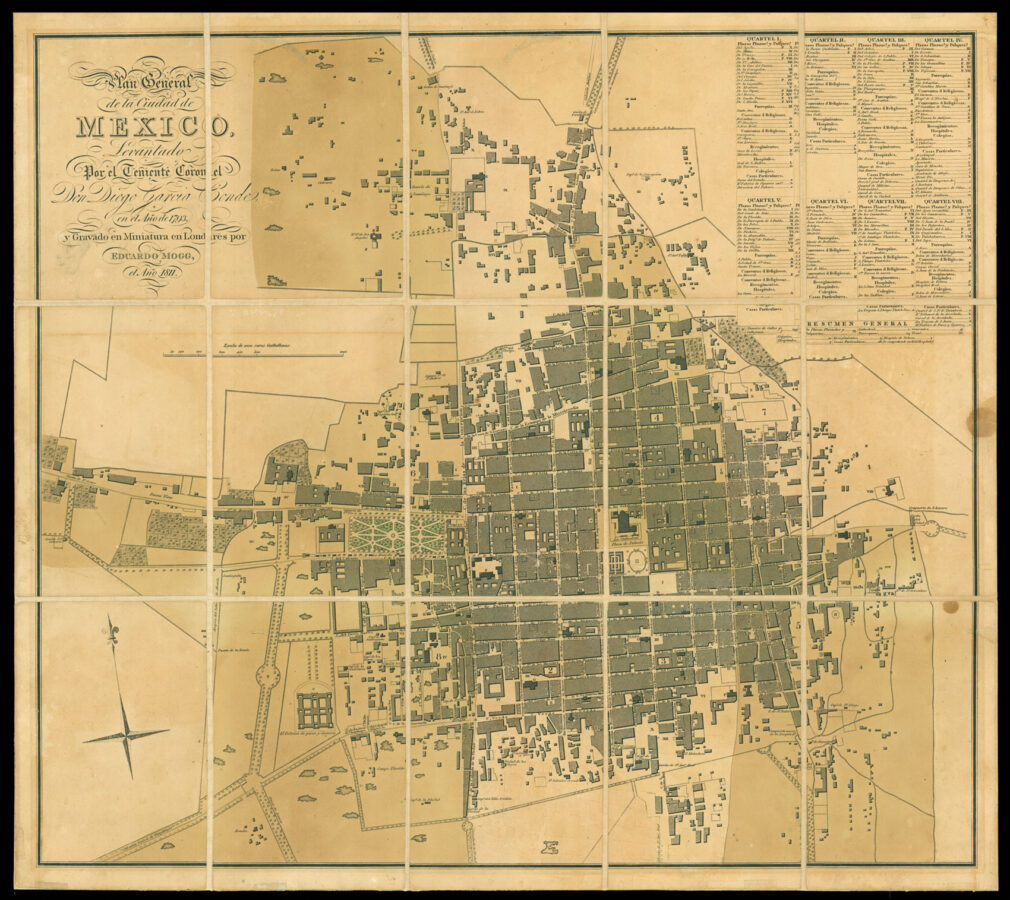 A reduction of Diego García Conde’s map of Mexico City, published by Edward Mogg. The original, published in 1807, was ​“probably the most important plan that had been drawn up of Mexico City in the nineteenth century…This plan became the source to many others because it was copied and updated by several authors and editors” (Mayer). It was drawn on an unusually large scale from an accurate survey carried out by Viceroy Conde de Revillagigedo in 1793. The Viceroy had initiated a raft of social and urban reforms in the city, including the foundation of the Academy of Saint Carlos, where the map was produced. The mapmaker, Diego García Conde (1760–1822) was a military engineer who fought in the War of Independence; the engraver José Joaquín Fabregat (1748–1807), was director of engraving at the Academy.

The original plates for Conde’s map were destroyed: this reduction was published in 1811, probably because of British interest in the Mexican War of Independence, which had begun in 1810. Although it is a reduction, Mogg’s map still shows Mexico City in some detail, capturing both the wealth of the centre of the Spanish Empire, and also the developments made under Conde de Revillagigedo’s viceregency. The city is divided into eight wards, with the public, religious and government buildings in each marked by a key. Also visible is ​“La Garita de Belén”, which would play a crucial part during the Mexican-American War: after it fell to American troops, Mexico City itself was captured.

Edward Mogg (fl1803-1860) was a cartographer, engraver, and publisher, active in London at the beginning of the nineteenth century. Rather unusually for the time he not only drew his own maps, but also engraved them. The business was mainly based upon the production of pocket travel guides and maps.

There are only two copies remaining of the 1807 original, in the British Library, London and University of California, Berkeley. We have only been able to trace one institutional example of this edition: that held by Yale University Library.