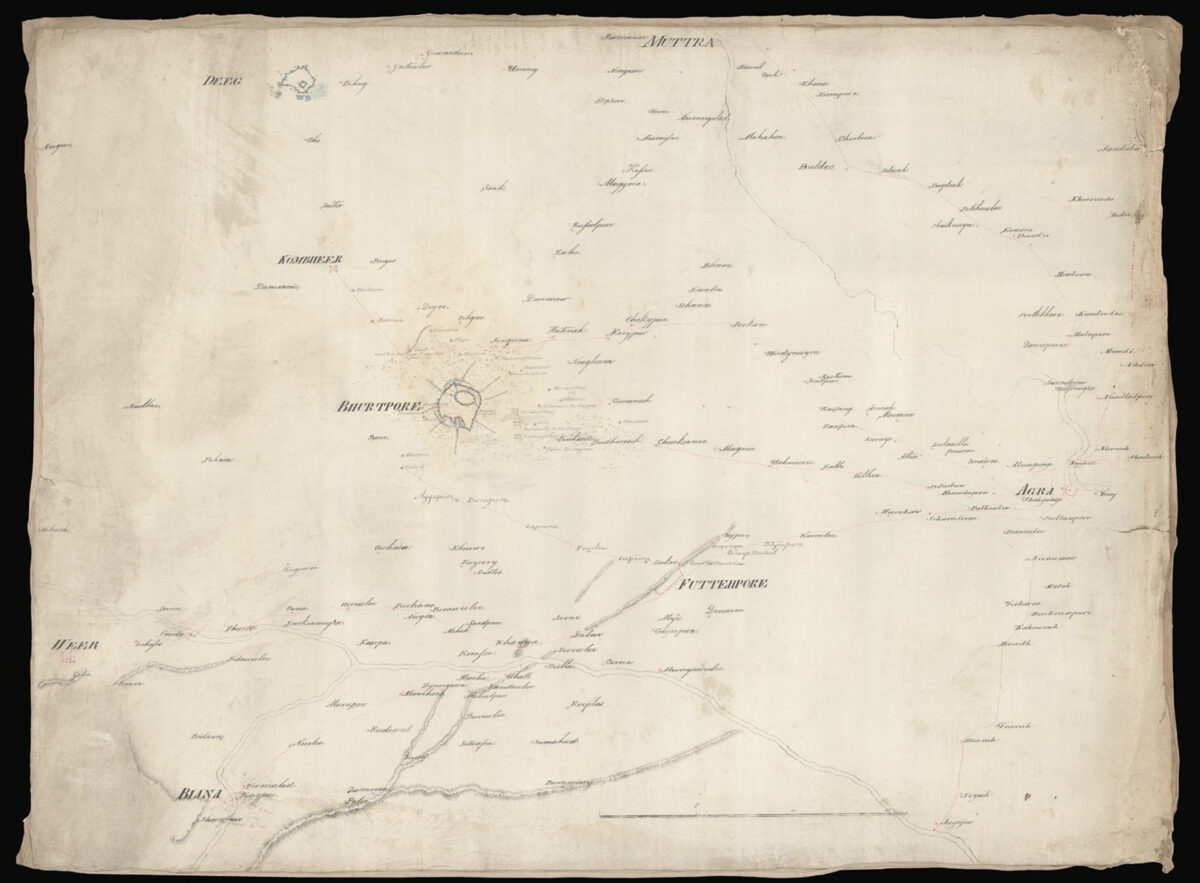 Military sketch map of the Siege of Bharatpur

Military sketch map of the fort of Bharatpur and the surrounding country.

Bharatpur was at the time the capital of the Jat Kingdom, who held an uneasy truce with the British East India Company. In February 1825, the then ruler Baldeo Sigh died with his six year old son Bulwant Singh being named his successor. The succession had the explicit support of the British. So when the new Raja’s cousin Durgan uspurped the throne, the British Resident in Delhi, Sir David Ocherlony, warned the local people and chieftains not to support Durgan, but his advice was ignored.

Durgan and his followers had two reasons for confidence: the British were already committed to a war in Burma, and the Jats calculated that that meant there would not be sufficient troops left over to fight them; moreover, there was a belief that the fortress in Bhurtpore was impregnable, famed for an episode twenty years previously when it had withstood a siege and several assaults by a British army under General Lake. The British had suffered very few military setbacks in India, so Bhurtpore assumed a symbolic significance for the independent princes of North India.

General Sir David Ochterlony who, acting on his own initiative as Civil Commissioner, advanced on Bharatpore with an army from the British garrison at Delhi. When Lord Amherst, the Governor General of India, heard of the move, he sent peremptory orders to recall the troops, whereupon Ochterlony resigned. The British appointed Lord Combermere as commander-in-chief. Combermere arrived in Calcutta from London on 2nd October, reaching Agra 1st December. And the outskirts of Bharatpur by 10th December. The siege itself was relatively swift with the fort being completely surround by the British by mid December and breaches in fort’s considerable walls being made on 18th January, 1826.

Following the capture of the fort, the numerous forts surround the Bharatpur, including Wier, Deeg, Biana, and Fatehpur Sikri quickly surrendered to the British.

The map, on a scale of half an inch to the statute mile, stretches from Weir (Weer) in the west to Agra in the east, and Deeg in the north to Bayana (Biana) in the south. Little topographical detail is shown with only major rivers and mountain ranges to the south sketched in, with dense foliage surrounding Bharatpur. Towns and villages are marked with a red circle and a pinhole, with the names secretary hand. The names of cities and major conurbations are in upper case. The majority of the towns are linked by thin red lines, either denoting roads or the routes taken by the British Army, commanded by the General Combermere.

The greatest detail is left for the county immediately surrounding Bharatpur: numerous villages are marked, with the fort itself depicted with all its ramparts and parts of the moat. To the upper right the camp is marked with text: ​“Camp said to be 8000 horse, 4000 foot, and 12 guns”. The text probably refers to the Jat forces under the command of Durgan Sal. The force was protecting the Jheel Bund, the earth wall surrounding the city’s lake, which if breached would have flooded the fort’s outer defensive ditches and the surrounding countryside, thus making an assault on Bhaartpur considerably harder. One of Combermere’s first actions was to capture the strategic point, which the British did on the 10th December. To the right of the fort three squares with trees are marked: ​“Mirdee Baug”, ​“Buldeo Sing Ka Baug”, and ​“Luchman Sing Ka Baug”. These three squares denote three formal gardens; the garden of Buldeo Sing was key to the British success as it allowed protective cover for their artillery during the siege.