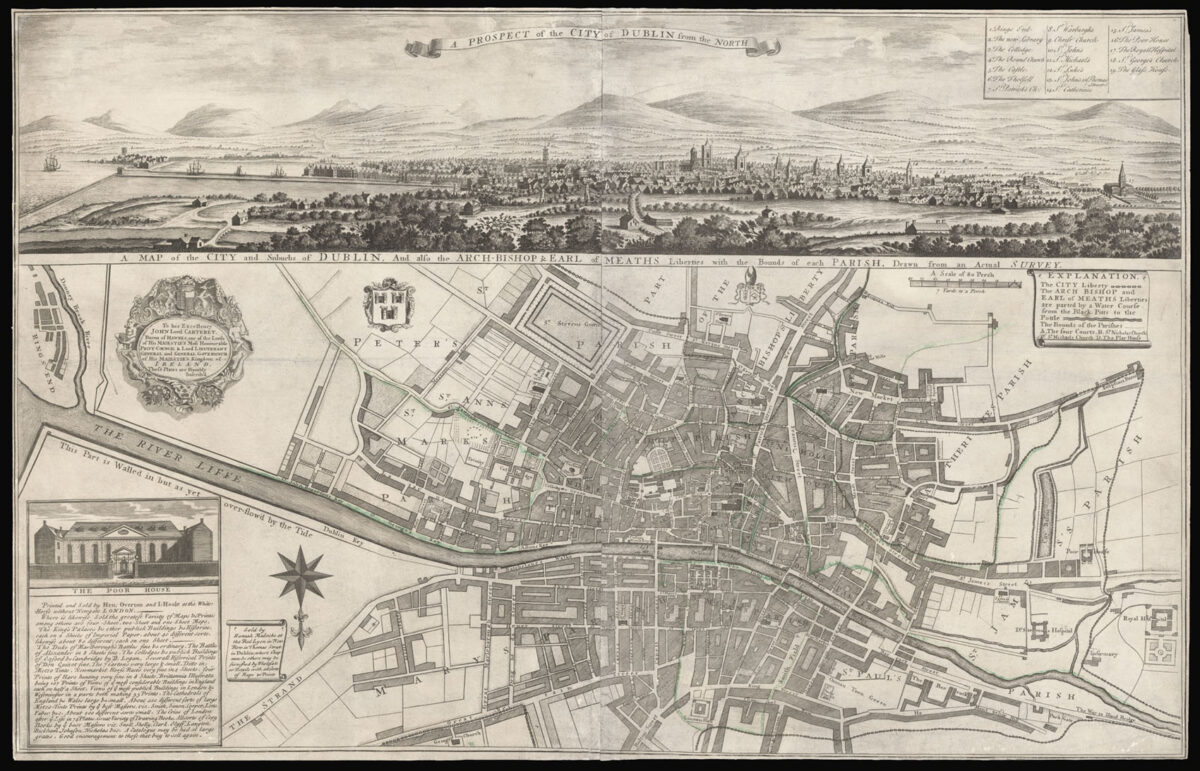 A Map of the City and Suburbs of Dublin And also the Arch Bishop and Earl of Meaths Liberties with the bounds of each Parish. Drawn from an Actual Survey.

Brooking’s work is not only ​“the first major map of Dublin since John Speed” (O’Cionnaith), but it is also the earliest to portrayal Dublin on such a large and detailed scale.

The Plan
The plan, on a scale of seven yards to an Irish perch, stretches north to south from the Linen Hall to St Stephen’s Green, and west to east from the Royal Hospital to Ringsend. Of all the major seventeenth and eighteenth century plans of the city Brooking’s is the only one to mark and list administrative boundaries. The plan shows a bustling and rapidly expanding city, with the newly developed northern suburbs, and the beginnings of construction work in the south. To the left of the plan is a dedication to Lord Carteret, Lord Lieutenant of Ireland, with the city’s coat-of-arms to the right of the cartouche. The bottom left bears an inset of the Poor House, together with an extensive text. Above is a view of Dublin from the north, with an explanatory key to the upper right. Curiously Brooking has decided to orientate the plan south to north, presumably to correspond with the orientation of the view.

Publication and Piracy
When Brooking completed the work in 1728, his manuscript consisted of a large plan below a view of the city, flanked by 20 vignette views of major public buildings and statues, together with 24 coats-of-arms representing the cities various guilds. In the same year he presented the work to the Dublin Corporation, who were so impressed that they not only helped him in the engraving of the map, but also paid for some of the surveying costs:

​“The Receiver General of the City Revenues, Humphrey French, was instructed to pay Brooking £10 towards his expenses and the Council voted to contribute an additional £10 towards getting the map engraved in London. Despite their enthusiasm and financial encouragement of Brooking’s project, he was unfortunately misnamed Thomas, rather that Charles, in every mention of him in the council’s 1728 records” (O’Cionnaith).

The engraver Brooking chose was John Bowles, a map and printseller with premises at Mercers Hall, Cheapside. The map was published towards the end of 1728, with the work consisting of three engraved sheets. Bowles took the unusual step of engraving part of the east and west sections of the plan on the plates containing the side borders. The plan was soon on sale in Dublin, as can be seen from an advertisement in the Dublin Weekly Journal, 15 February, 1729:

​“Just Imported from London, A New and correct Map of the City of Dublin, either in two or three Sheets, Coullered: the Price for the 3 Sheet, 3s 6d. and the 1 of 2, at 2s. 2d. unfr[a]med. Sold by Hanna Madocks at the Red Lyon in New Row, near Thomas street. N.B. By said Persons are sold all sorts of Metzotinto’s and Pictures, at reasonable Rates”.

As one can see from the advertisement Hannah Madock was offering both a three sheet plan and a considerably cheaper plan of the city on two sheets – the present work.

The two sheet plan bears the imprint of Henry Overton, John Hoole, and Hannah Madock, and has clearly been copied from Brooking’s original. It is remarkable just how quickly Overton, Hoole, and Madock managed to copy and publish Brooking’s work, and there are several differences between the plans, which demonstrate the haste in which it was produced. The most striking difference is the absence of the left and right borders; this meant that the work could be produced far more quickly, on fewer sheets of copper, and thus much more cheaply than the Bowles edition. On the plan Brooking’s name is omitted from the both the title and the dedication. Overton does, however, include a reference not seen on any of the known Bowles examples, ​“Earl of Meaths double Mills” beside the river Poddle near Blackpits. There are a few copying errors, for example Bowles’ ​“Stephens” street is rendered ​“Stepkeans” street. To the lower left Overton curiously retains the view of the Poor House, but omits the ​“Tholsel” (City Hall), replacing it with an advertisement by Overton, Hoole, and Madock. To the upper right of the view, a key has been added listing the most important buildings.

This blatant act of plagiarism did not go unnoticed by Bowles, who took out an advertisement in the Dublin Gazette on 15 March 1729:

​“About Six Months ago was publish’d, a Map of the City of Dublin, from the actual Survey of C. Brooking, sold at 5 Shill. English; and whereas there has lately been sent over spurious, imperfect, and pyratical Copy of the said Map, sold at an under Price. The Proprietor of the Original Map done from Brooking’s Survey finds himself obliged (not withstanding the considerable Expence he has been at in prosecuting said Map in the best Manner, and the great Loss he is like to sustain thereby) to fall the Price to an English Half Crown: which it is hoped will give no Offence to any of those Gentleman who encourag’d the Work.
N.B. It is not to be doubted but that the Publick will shew their Abhorrence of these mean pyratical Practices, by discouraging the spurious Copy; at least every one before they buy it will compare it with the Original, which has Brooking’s the Surveyor’s Name, and Bowles’s the Proprietor. All others are imperfect and spurious. The said Original Map is now sold by most Booksellers in Dublin, at an English Half Crown.“

The entreaty that persons should shun the ​“spurious Copy”, was evidently heeded by Dubliners, as only three of the 19 extant examples bear the Overton imprint.

Charles Brooking
Charles Brooking (?1677–1738), was a painter who lived and worked the majority of his life in and around Plymouth. It would appear that he was rather skilled and was employed to do both figurative painting and lettering. As well as local churches, he is known to have decorated Rudyard’s Eddystone lighthouse, which replaced Winstanley’s pioneering construction, lost in the Great Storm of 1703. In 1718, however, Charles Brooking senior went bankrupt. The bankruptcy proceedings began in Plymouth, and dragged on until 1722 in the Guildhall, London. It appears that he had settled his debts, and then moved temporarily to Dublin. In 1724 and 1725 he received payments for carpentry and building work at Trinity College, Dublin. It is not certain how Brooking, a jobbing painter and decorator, came to survey the city. Whatever the circumstances, the plan of the city was greatly appreciated by the Dublin Corporation, and would not be superseded until Rocque’s 1757 map of the city (item 37).

By 1729, Brooking had moved to London and was working at Greenwich Hospital. He was criticized for poor workmanship at the end of 1729, on the marbling of the columns in Thornhill’s Painted Hall. In 1732 he took apprentices, one being his son Charles, though the child was only nine years old. The last known date of his involvement at Greenwich is 1736.

Rarity
Of the 16 examples examined by J. H. Andrews, for his work on the plan, three were in the British Library, which holds one of each of the three states: Bowles; Mercers Hall imprint, Overton; and Bowles, Black Horse imprint c1740. Of the remainder, four were in private collections; two in the National Library of Ireland; and the rest in the Dublin Civic Museum; Geneological Office; King’s Inns; National Gallery; Port and Docks Board; Royal Irish Academy; and Trinity College. Copac records a further three institutional examples: the National Library of Scotland; Cambridge University Library; and Bodleian Library.

Andrews states that of the examples he consulted only three bear Overton’s imprint: the British Library; an example in the collection of the antiquarian E. MacDowel Cosgrave; and another unreferenced example.