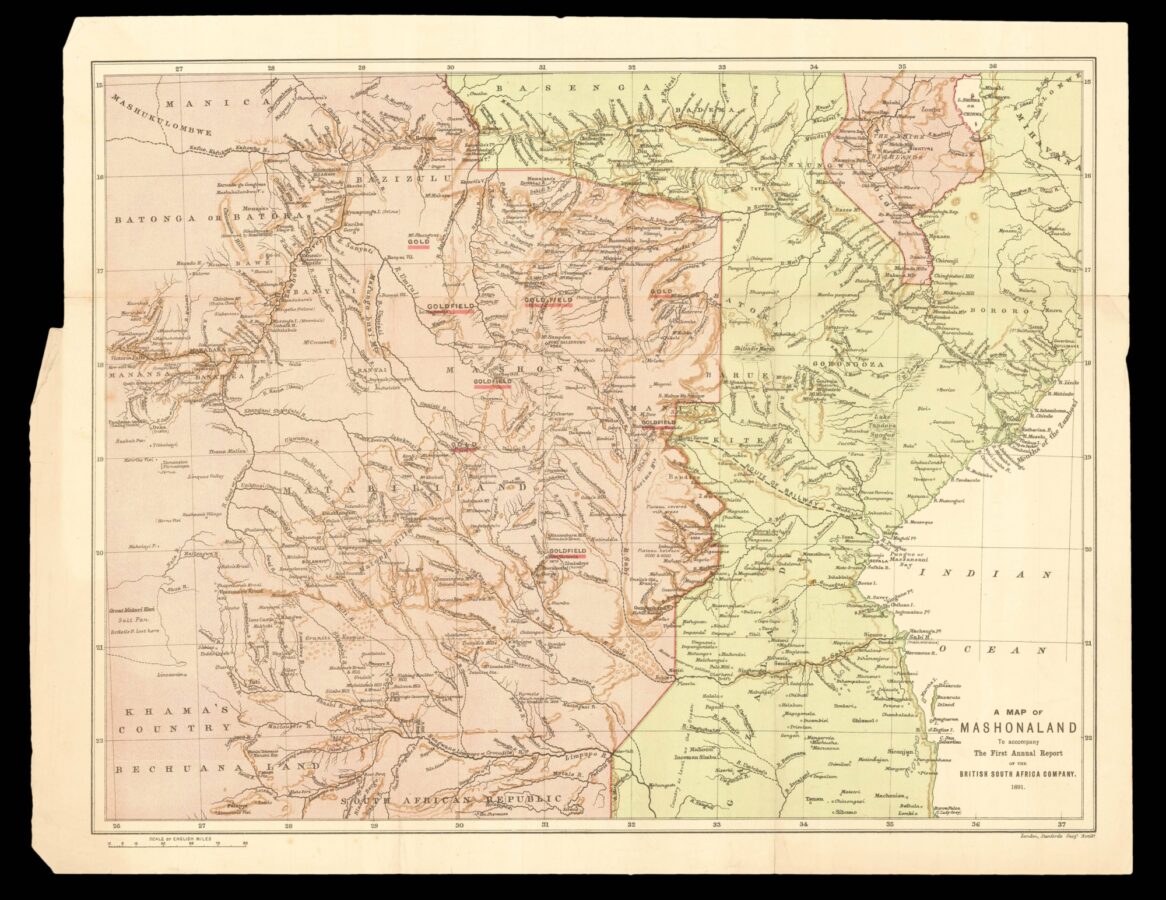 Mapping the minerals of Mashonaland

A map of Mashonaland to accompany the First Annual Report of the British South Africa Company.

This rare map of Mashonaland, now part of Zimbabwe, is one of the earliest maps created by the British South Africa Company (BSAC), presented as part of its first annual report in 1891. The company had been established by Cecil Rhodes to exploit the expected mineral wealth of Africa from ​‘Cape to Cairo’, and had received a Royal Charter in 1889. Following reports made in 1866 by a young geologist, Carl Mauch, that miles of goldfields were lying untapped in Mashonaland, the directors of BSAC became determined to make the most of this hidden potential. When the anticipated gold failed to materialise, the company found itself in financial difficulties, and many of their enterprises, such as railway expansion, ground to a halt. Nonetheless, the company remained in charge of Northern and Southern Rhodesia, as the region came to be known in the late 1890s, until 1924, when administrative power and control of the land was given over to colonial Governors.

This map contains a wealth of information about the politics, industry and geography of Mashonaland under BSAC. Although there is no key included, later maps created by the company indicate that the areas shown here in pink represent those under the control of the company, whereas those in green are regions under the Portuguese sphere of influence. The Anglo-Portuguese Treaty of 1891 had fixed boundaries between the colonies in this part of Africa, and this map may even be the first to show the official new borders. The pink area in the upper right corner of the map shows the quaintly-named Shire Highlands, a plateau in Malawi where David Livingstone had set up a missionary station in 1861, leading to a strong British presence in the region. In the centre of British Mashonaland, eight goldfields are boldly labelled, and annotations across the map identify other resources and raw materials, such as granite and salt; on the Portuguese side it is noted, perhaps gloatingly, that the land contains ​‘masses of waterworn pebbles’. Alongside these details, there are notes of various historical events, such as the capture of the geologist Mauch in 1868, industrial sites and trading centres, and British forts and camps. The relief of the land is roughly represented, while far greater attention is paid to the vast system of roads. The railways had not yet been expanded at this early point in the BSAC’s control, and so the only tracks shown on this map are within the Portuguese region.

This was published at Stanford’s Geographical Establishment in London, founded and run by Edward Stanford. At this point in time, Stanford had already become the sole agent for Ordnance Survey Maps in England and Wales, and two years after the publication of this map, he was to receive his royal warrant as Cartographer to the Queen. As well as the Ordnance Survey, he was an agent for the Admiralty, the Geological Survey, the India Office and the Society for the Diffusion of Useful Knowledge. Stanford continued to produce maps for the British South Africa Company, which gradually became larger and more detailed surveys of the company’s territories. This early map, however, is extremely rare: although the first BSAC Annual Report, of which it is a part, is held in New York Public Library and the British National Archives, we have not been able to trace another example of the individual map.