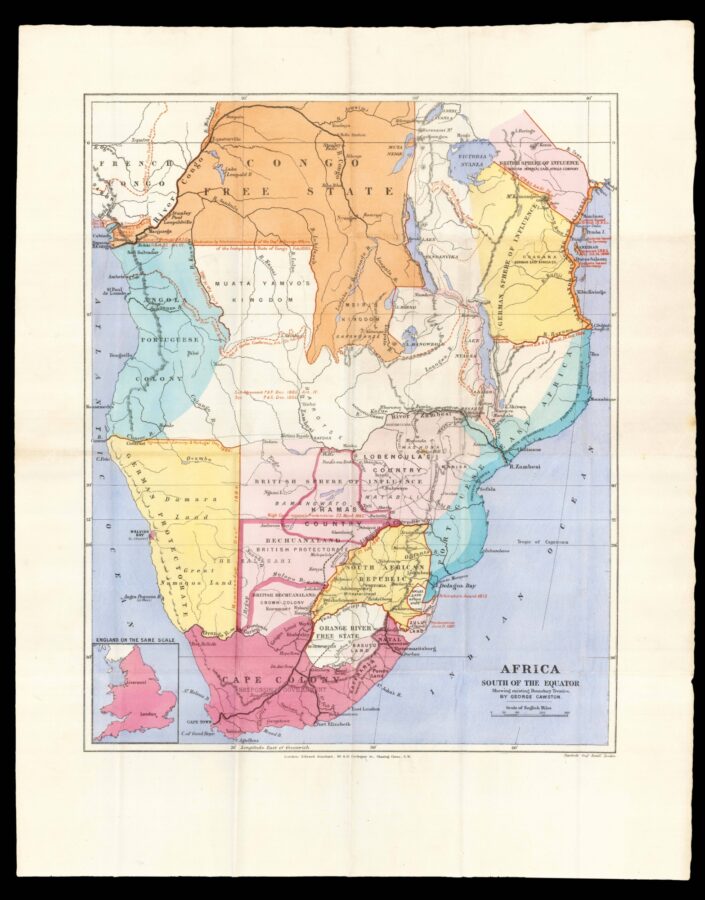 This map presents the colonial territories of sub-equatorial Africa during the early years of the ​‘Scramble for Africa’ which would play out over the following two decades. The possessions of each European empire are distinguished by colour, with the British in pink, German in yellow, Portuguese in green, Belgian in orange and French in white. The boundaries are shown boldly in red, and text beside each one identifies the agreement by which the border was created. These range from 1884 to 1887, but the majority are attributed to the General Act of the Berlin Conference in 1885. During this conference, the European powers had decided to divide up Africa and agreed on the partitions shown here. These were not fated to remain so stable, however, as these divisions were challenged by conflicts with natives and between the European forces themselves. Throughout the following decades the map of Africa would see significant changes: the grey area across South Africa was to become a British possession, for instance, and the Luanda Kingdom (here labelled St Paul de Loando) was divided with the Congo Free State. It is interesting to note that Congo is here shown as a Belgian territory, when in fact it was in reality the personal property of King Leopold II at this time.

The map is clearly more concerned with colonialist politics than geographical data, and yet it nonetheless displays the names of significant cities, ports, rivers and lakes. It is perhaps no surprise that these details appear more densely in the British territories, given that the compiler of this map, George Cawston, was a founding member of the British South Africa Company. Established in 1889 to exploit Africa’s mineral wealth, the British South Africa Company took charge of much of the administration, industry and development in the territory for the following 35 years. The small inset map of Britain in the lower left corner offers some perspective on the vast scale of Africa.

This map was published at Stanford’s Geographical Establishment in London, founded and run by Edward Stanford. At this point in time, Stanford had already become the sole agent for Ordnance Survey Maps in England and Wales, and was later to receive his royal warrant as Cartographer to the Queen. As well as the Ordnance Survey, he was an agent for the Admiralty, the Geological Survey, the India Office and the Society for the Diffusion of Useful Knowledge. Stanford continued to produce maps for the British South Africa Company throughout its period of influence. The paper on which this map is printed bears one of the distinctive watermarks that identify it as the product of paper-maker Thomas Saunders. The map is rare on the market, and we have been able to trace only four institutional examples.