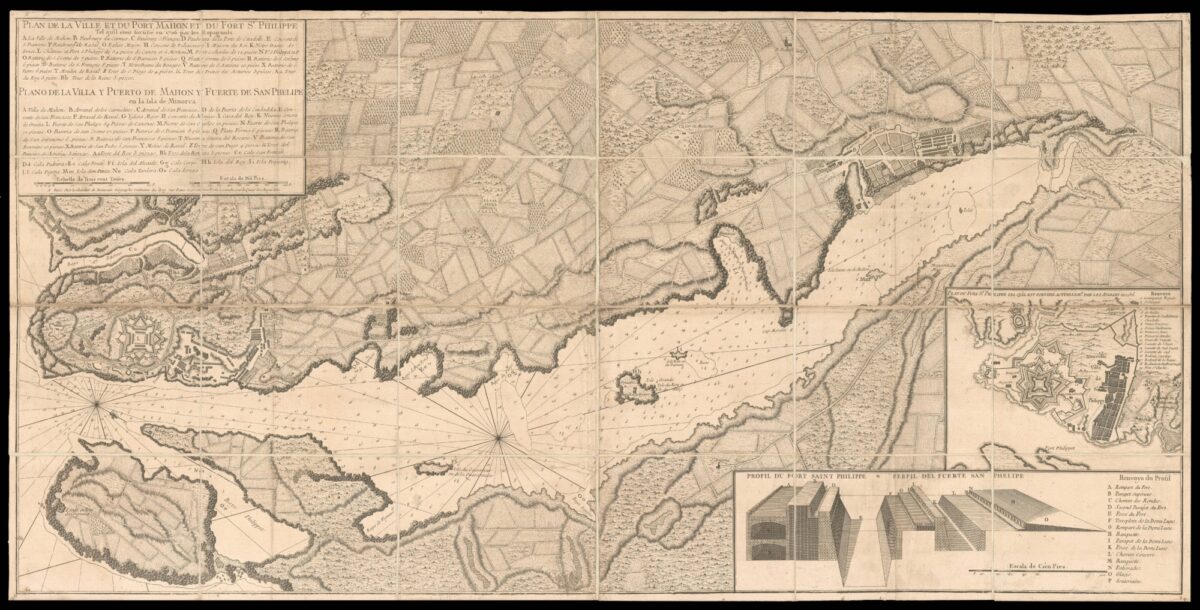 This map showing a plan of the city of Mahón on Menorca, near the Catalonian coast, records the area at a key point in its history. The island officially became a British possession in 1713, during the War of Spanish Succession, and subsequently the capital was transferred to Mahón, where the British Governor resided. Around the time this map was produced, the city became involved in the Seven Years’ War, with the Siege of Fort St Philip taking place in 1756. Two insets in the lower right corner show this fort, labelled with its French and Spanish names and viewed from above and in profile. The Italian architect Gianbattista Calvi had constructed the fortress under the orders of King Felipe II in 1554, and it had been fortified by the Spanish in 1706. 50 years later, it was captured by the French army, but only remained under French control until the end of the year, when it was transferred back to the British. In 1782, the Spanish retook the fort and the island, and the former was demolished. Port Mahón played an important role throughout these various conflicts, and as one of the world’s finest natural harbours, it was carefully guarded as a strategic stronghold.

The map encompasses the surrounding rural regions to the North, and the detailed coastline around the port. The plans of the fortress and city suggest that this map would have been put to use as a military tool; made by the royal geographer of France, it is possible that the Louis XV commission the map in the immediate aftermath of his victory. In the upper left corner, a key identifies the various buildings, roads and islands featured on the image. The key is written in both French and Spanish, yet further evidence of how the island was constantly changing hands throughout the eighteenth century.