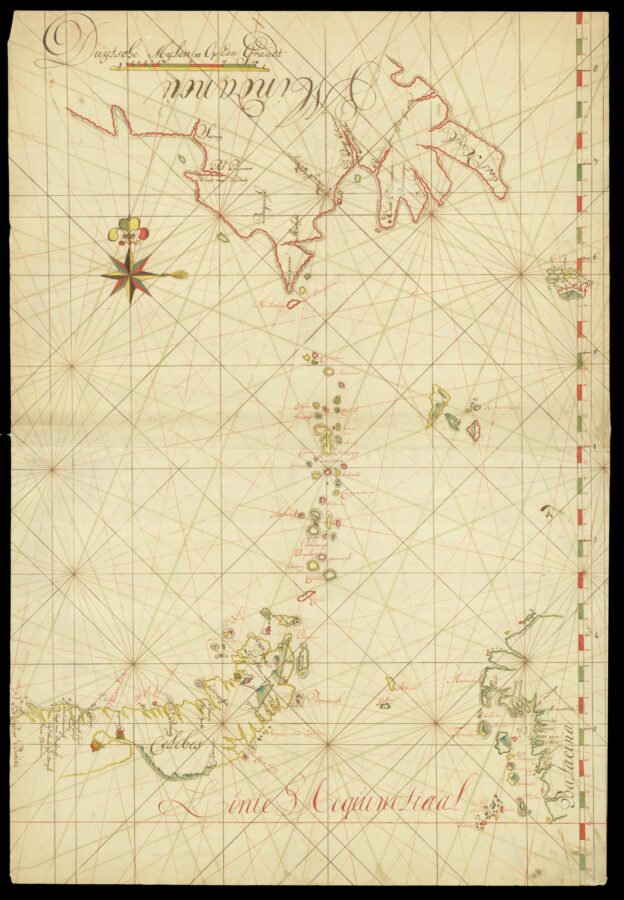 Manuscript VOC chart showing the Philippine island of Mindanao, from the workshop of Gerrit de Haan in Batavia

Untitled Chart of the Celebes Sea.

An elegant example of a Dutch East India Company [Verenigde Oost- Indische Compagnie] – VOC – manuscript chart from their Batavia workshop, under the direction of baas-kaartenmaker Gerrit de Haan, and a rare survival in superb condition.
Showing the route from present-day northern Sulawesi to the south coast of Mindanao, the second largest island in the Philippines, and of considerable interest to the Dutch. Since 1581 the Spanish had dominated Luzon, the northern and largest island in the Philippines, from their base in Manila, but had found it hard to colonise some of the most northern and southern sultanates, such as Mindanao.
This encouraged many VOC expeditions up the island chain in the Celebes Sea, from their bases in the Indonesian archipelago, in attempts to chase the Spaniards away in order to gain access to valuable trade with mainland China. The Treaty of Westphalia of 1648 ended the Thirty Years’ War, and most of the local struggle, so that after the mid-seventeenth century, the former European enemies withdrew to their own separate Southeast Asian spheres of influence.
The cartography of the coast of Mindanao most closely follows that expressed by Francois Valentyn in his chart ​‘De Landvoogdy der Moluccos, met de aangrenzende Eylanden’, from ​‘Oud en Nieuw Oost-Indien, vervattende een Naaukeurige en Uitvoerige Verhandelinge van Nederlands Mogentheyd in die Gewesten’ (1724–1726), based on his own travels in the area and previously unpublished VOC charts and information. It does not reflect the cartography or toponyms of Pedro Murillo Velarde’s iconic map of 1734, nor that of de Haan’s 1761 chart of the Philippines held in the Dutch National Archives. However, the coastline of northern Sulawesi and the small northern islands is more detailed in the VOC chart, and supersedes that of Hendrick van der Burgh’s chart of northern Celebes and the northern Moluccas, now in the BnF, illustrated by Schilder page 172 (undated).
​“Apparently, Velarde’s work did not receive much attention from Dutch cartographers, especially those of the VOC or related to it. In the early eighteenth century, the most acknowledged Dutch map of the Philippines was that of Francois Valentyn. Published about 1724, his chart of the archipelago was probably based on sources from the VOC’s archive of maps to which Valentijn had access. Compiled ten years before Velarde’s chart, Valentyn’s works shows considerable shortcomings in the outlining of the islands. When Johannes II van Keuelen, the official hydrographer of the VOC, published his famous maritime atlas in 1753,
… for the presentation of the Philippines he included a chart that was still based on the outdated Valentyn’s work. Having in mind that Velarde’s chart was already known in Europe, Keulen’s decision of not updating his chart of the Philippines with Velarde’s information can only be justified in the context of his vigilance about not making the newest information widely available” (Altic, page 88).
The fifteen, or so, place-names supplied for Mindanao are mostly Dutch transliterations of local toponyms, with one or two inventions of their own, and include a number that are not represented on Velarde’s map. Working clockwise round the chart: the peninsula which Velarde names ​“Capo d Sn. Augustin” is here ​“Oost Hoek”, now referred to as Parola Lavigan; Velarde’s Punta Agūdat, is here Hoek Pondagytam, present-day Pantukan; Rio Tho, appears as ​“Rievier Jeussi offte Gout R.r”, now Tagum-Libuganon; an unnamed river on Velarde’s map is identified here as ​“D. Rievier Dabo”, now the Davao River and site of a major city; Velarde’s unnamed peninsula, is here identified as Siruganna, now known as Samal Island; Sanguiti on Velarde’s map is identified as Boyang here, now known as Buayan; Saranga island is here called MaLoeLang ond Siruganna, now Talikud Island; Paigoan, is here R.r Peguan, now Pagadian Bay; Velarde’s Simuay, is here ​“t Soymay”, now Kumalarang.
The chart was undoubtedly produced by the kaaretenmakers-winkel (mapmaker’s workshop) in Batavia. It is unsigned, but most closely resembles, in style, those produced by and under the direction of Gerrit de Haan, who was of baas-kaartenmaker (chief mapmaker) in Batavia from 1747–1769. For a brief period following Haan’s tenure, Schilder records that Wigle Sicma, was baas-kaartenmaker there, and illustrates an elaborate receipt for charts, books and pilot’s equipment, made out by him in the same distinctive cursive hand-writing that appears on this chart (see Ill 9.6 page 177). A chart of the Gulf of Thailand, which closely matches the current example, was offered at a Christie’s auction in 1999. Also unsigned, and unattributed, its whereabouts is currently unknown.
The chart is drawn on Dutch paper with a watermark that dates to about 1733. It bears hand-drawn rhumb lines, and so pre-dates the measures, such as pre-printed compass lines, implemented later to minimize copying errors. In 1753, the sixth volume of the ​‘Zee-Fakkel, vertoonende de zee-kusten, eylanden en havens van Osst-Indien’, depicting the sea coasts, islands and harbours of the East Indies, was printed by Johannes II Van Keulen. From the following year, each VOC ship departing Holland had this volume on board, with orders for the pilots to compare the charts and descriptions with their own findings. Discrepancies were to be reported to the publisher, who would update the printed charts, and the ​“name of the informer would be inserted into the Nautical Atlas in his memory and honour” (Schilder page 165). It is not surprising, therefore, that in 1755, Gerrit de Haan felt able to return 1163 parchment charts to Amsterdam from Batavia, having deemed them to be defective. It is highly likely that the current chart is one of these.

Although, overall, the VOC must have caused the production of many thousands of charts, some estimate as many as 55,000 in the course of 200 years of its dominance, less than one percent of that total is known to survive. They included ​“overzilers”, or plotting charts for long-range voyages mostly drawn on vellum; and short-range navigation charts that describe coastal waters, roadsteds, harbour and river entries, and charts that show where accidents were prevalent, mostly drawn on paper. The current chart was produced for one of these shorter local voyages, so was drawn on paper to keep production costs to a minimum. The war of attrition on all VOC charts, but particularly those on paper, from conditions at sea, theft, official destruction, political intrigue, and the degenerative effects of time and environment, has been great. Additionally, the charts kept in the archive in Jakarta, that had not been decimated by climate and local fauna, were ​“cleansed” on the orders of Governor-General Herman Willem Daendels (1807–1810), making charts from the kaartenmakers- winkel there exceptionally rare.
VOC — Vereenigde Oostindische Compagnie — Dutch East India Company
The VOC and its subsidiaries were the first joint stock companies in history, and the forerunners of modern corporations; eventually giving rise to a multi-national global empire, where money, and the ability to manipulate and move it, becomes the principal resource and driving force.
For nearly one hundred years, after Vasco da Gama discovered a sea route to India in 1499, the Portuguese and the Spanish were dominant in the eastern and western hemispheres respectively. This dominance was aided by a policy of extreme cartographic secrecy by both crowns, and returning ships were required to surrender both their charts and information on any discoveries made. All charts were state property, and illegal use or copying was punishable by death. However, smuggling often took place, and piracy by both English and Dutch vessels meant that, eventually, the routes to both the ​“Old”, or East, and ​“New”, or West, Indies became available to northern Europe. Using this purloined information, the British East India Company — EIC — and Dutch Vereenigde Oostindische Compagnie — VOC — were established — in 1600 and 1602 respectively — to cash in on the lucrative trade in nutmeg, pepper, cinnamon, cloves, and other spices. 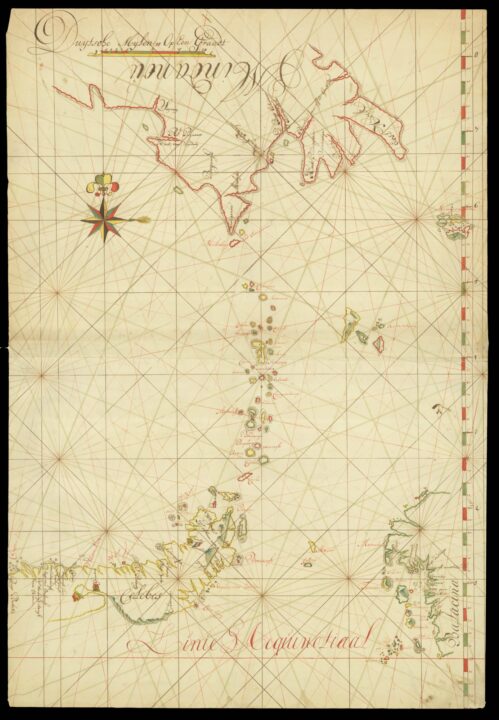